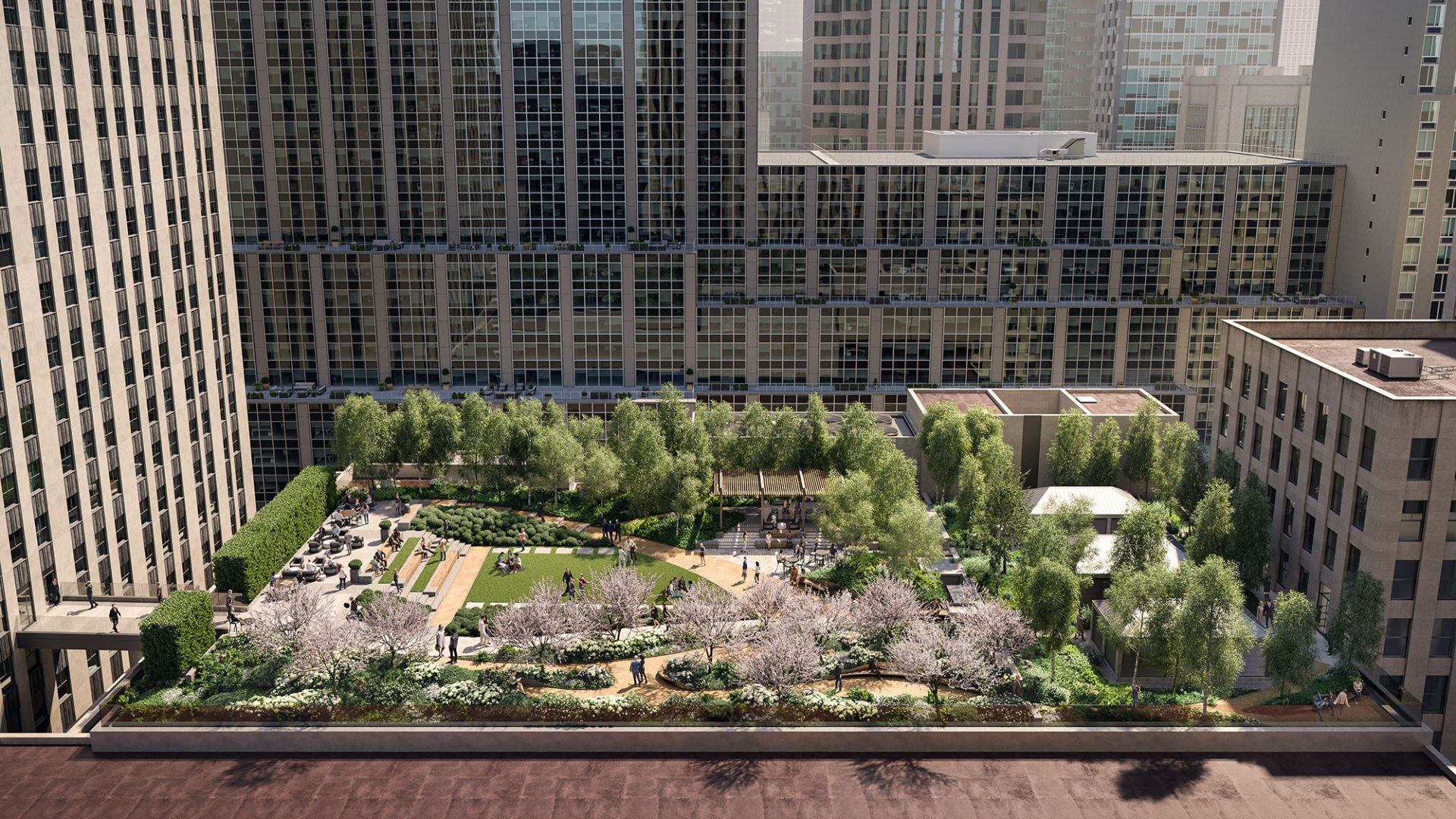 The Landmarks Preservation Commission has approved plans to construct a sky bridge between 1270 Avenue of the Americas to a new park on the roof of Radio City Music Hall (rendering top).

Tishman Speyer presented the proposal to construct the pedestrian bridge to bring to life a plan for a park on the theater’s roof that was included in the original blueprints of Rockefeller Center but never built.

“As we continue to reimagine our physical spaces and the experiences we can offer at Rockefeller Center, we are thrilled that the Landmarks Preservation Commission approved our proposal, which dates back to the earliest days of Rockefeller Center’s conception,” said Tishman Speyer in a statement.

“During this time when outdoor access is important, it is especially meaningful to be able to provide an additional 24,000 s/f of green space at the Center.”

The LPC unanimously approved the plan , which Commissioner Michael Devonshire called “one of the most admirable applications I have seen in a long time.” Radio Park is designed by landscape architecture firm HMWhite and the pedestrian bridge designed by G3 Architecture Interiors Planning.

The Commission said the plan was in line with the original vision of architects Ralph Hancock and Raymond Hood, a man considered a pioneer in the treatment of building roofs back in the 1930s when the Rockefeller Center was built with multiple roof gardens and spaces.

Radio City Music Hall was designed by Donald Deskey as part of the Rockefeller Center and its roof was originally an open space with badminton courts, shuffle board and card tables.

Historic preservation advisor, Cas Stachelberg, a partner at Higgins Quasebarth & Partners, told the LPC that original concrete roof will be landscaped to a 24,000 s/f green space called Radio Park. It will have paved and landscaped areas, pathways, pavilions, and seating and lounging areas.

Rockefeller tenants and their guests will be able to get to the park via the skybridge between 50 Rockefeller Center and the 10th floor of 1270 Avenue of the Americas that was featured in the original plans for the complex. Those working at Radio City Music Hall would be able to gain entrance to the park from inside the building.

None the work, according to Stachelberg, will be visible from street level and the park should be open by the fall of this year.

“As we look to bring our office tenants back on the idea of serving as a great outdoor space for our tenants and their guests, we are committed to making sure the Rockefeller Center is a dynamic part of New York’s recovery,” added Kelly.

The sky bridge to Radio Park comes after a year of work by Tishman Speyer to maintain the Rockefeller Center’s status as a premier New York office campus.

The landlord also installed public art and customized vending machines as it worked to build a beacon in a city starved of visitors and office workers.

“Even while adapting to these changing times in our city, Rockefeller Center can continue to be a favorite destination for culture, commerce, and community,” said Kelly.