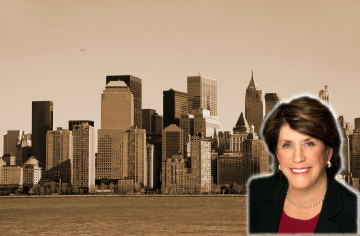 Long-time Marcus & Millichap broker Sharon Bands has died at her home in Palm Beach, Florida, following a battle with cancer. She was 75.

Ms Bands died on Tuesday, February 19, 2019, surrounded by family and loved ones, including daughter Susan Bands, who is the sales manager of Marcus & Millichap’s Manhattan office,

A TWA flight attendant during the heyday of air travel, Ms Bands was born and raised in Denver, CO, the oldest of two children of Gordon and Gladys Perkins.

She relocated to New York in the early 1960’s as a flight attendant for Trans World Airlines (TWA) but soon embarked on career in investment real estate that would see her rise to become one of the city’s most accomplished brokers.

During her expansive career she sold over 250 properties. Known as a shopping center expert, she completed transactions on eight million square feet of retail with an aggregate value of $1.2 billion and represented some of the nation’s largest developers, pension funds, and REITs, including Kimco Realty Corp., Benderson Development, JDN Realty, AEW Capital Management and Centro Properties.

She also worked with many high net worth individuals, partnerships, family trusts and investors representing offshore capital and was on first-name terms with leading private and institutional owners.

During her early career, she was affiliated with Grubb & Ellis as a senior managing director and spent nine years with Edward S. Gordon (now CB Richard Ellis) as a vice president and managing director of their Investment Sales Department. Ms Bands joined Marcus & Millichap in 2000 and went on to collect numerous dealmaking awards, including the prestigious Chairman’s Club, which was given to only 30 Marcus & Millichap brokers out of 1,300. She was a five-time winner of the National Achievement Award and in 2002,  she was recognized as being within Marcus & Millichap’s top echelon of achieving brokers as  a member of the 7 Figures Club.

Ms. Bands was recognized by her associates as an audacious, pioneering woman in the field of commercial real estate and an important role model for young business women.

Her friends will remember her joy of life, love of travel, fine food, theater, parties, dancing, boating, the beach, and laughter.

She is survived by her daughter, Susan, life partner Allen Willinsky, brother David Perkins, and grandchildren Sofia and Jack Brixius.