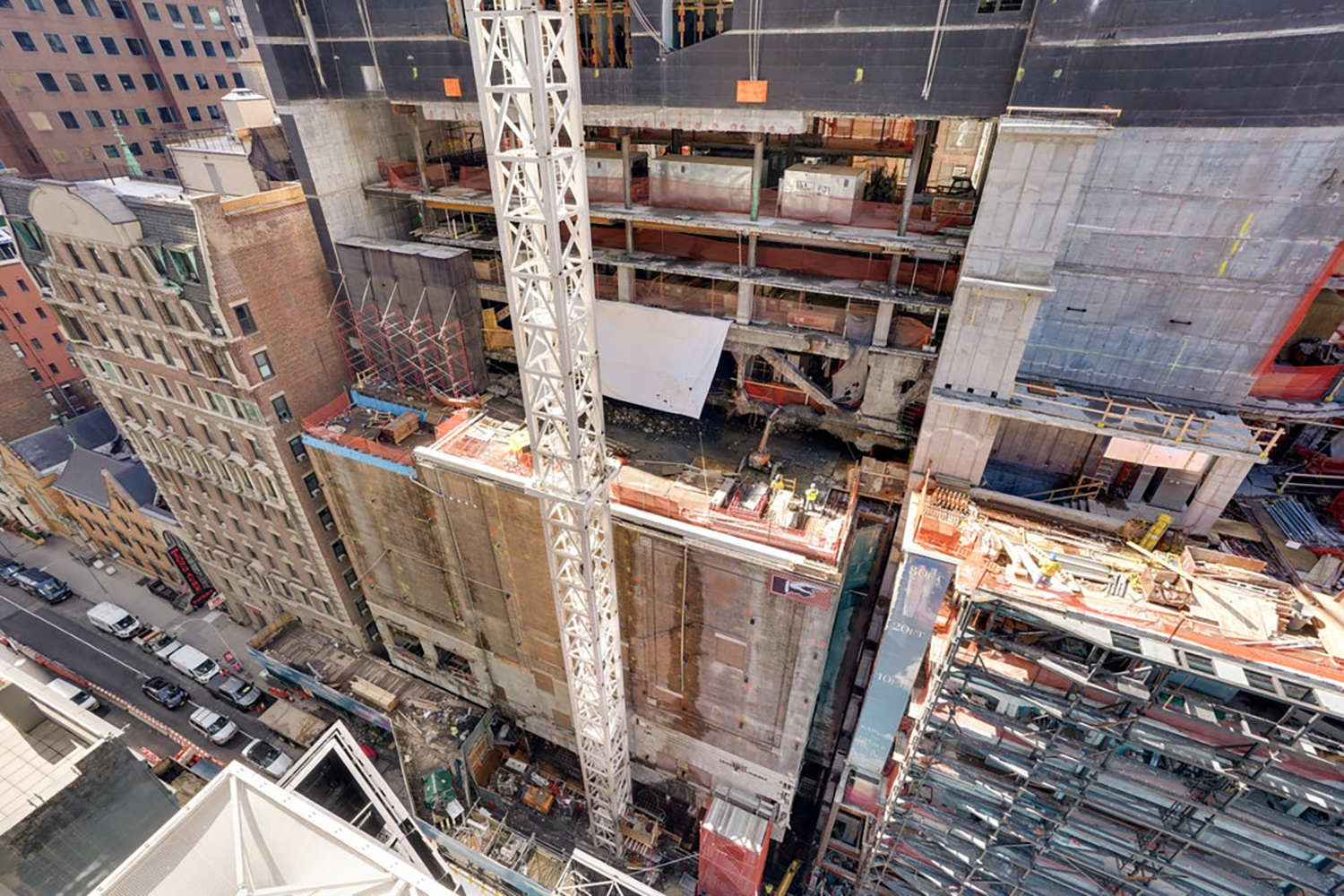 L&L Holding Company today announced the completion of the lift of the historic Palace Theatre to 30-feet above Times Square. One of the most exciting and highly anticipated aspects of the TSX Broadway development, the lift defied conventional engineering to unlock valuable ground floor retail space, while maintaining and preserving the landmarked theatre.

TSX Broadway is a 46-story, 550,000-square-foot, $2.5+ billion mixed-use development in the heart of Times Square that will reimagine hospitality, experiential retail, dining, and entertainment and is expected to be open in 2023. Along with the Palace Theatre, the project will also include Times Square’s only indoor/outdoor performance venue, the district’s largest outdoor terrace, a 600+ key hotel, 51,000-square feet of building signage and nearly 100,000 square feet of retail and entertainment space.

The Palace Theatre’s 14 million pound theatre box was lifted by utilizing a mechanism that is a hybrid between a structural steel shoring post and a hydraulic jack. The 1,650-seat Palace Theatre will soon undergo a $50 million renovation and restoration project, including refurbishing the theatre’s landmarked interior and upgrading and expanding the lobby, reception area and backstage.

“The completion of the Palace Theatre lift marks a milestone in this innovative project that is revitalizing Times Square and emerging as a symbol of the spirit of New York City’s economic and cultural strength in one of its most iconic destinations,” said David Levinson, Chairman and CEO of L&L Holding Company. “We are thankful to all of our partners for accomplishing this never-before-seen feat of engineering, which will preserve the legacy of this historic landmark while unlocking its full potential as a modern-day entertainment destination.”

“It is incredibly exciting to watch our vision for TSX Broadway take shape,” said Robert Lapidus, President and CIO of L&L Holding Company. “Thank you to our partners and neighbors who have supported us throughout this endeavor and helped us along every step of the way. The Palace Theatre lift signals the beginning of a cultural and entertainment revolution in New York City, and we look forward to sharing what comes next.”

“This project ensures that the Palace Theatre will continue its historic legacy in its new home at TSX Broadway,” said Manhattan Borough President Mark Levine. “In order to thrive in our post-pandemic world, Broadway, Times Square and our entertainment industry needs to innovate to engage with consumers of all kinds – and we are looking forward to everything this project is bringing to our district.”

“We look forward to inviting everyone to visit the Palace Theatre in its new home in the coming years. This project symbolizes the essence of Times Square, a district that sits at the intersection of our city’s history and its future,” said Tom Harris, President of Times Square Alliance. “This remarkable engineering project will elevate the theatre’s prominence as a part of TSX Broadway, which will create new experiences for all who visit.”