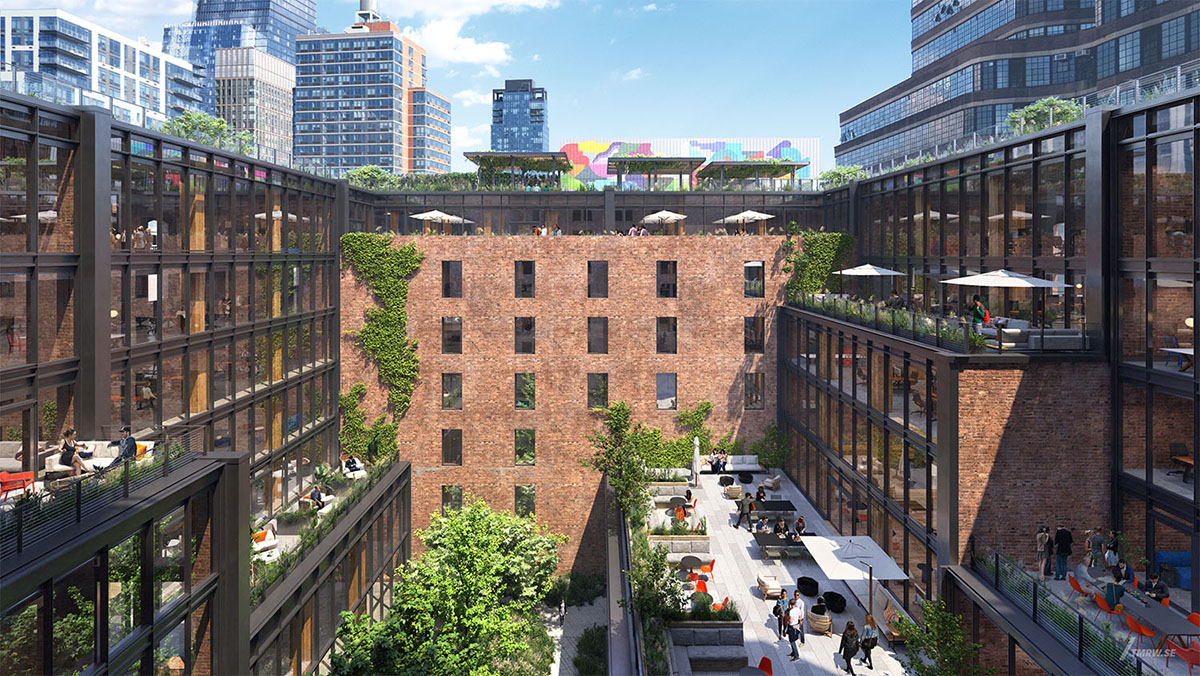 L&L Holding Company and Columbia Property Trust have closed on $1.25 billion in construction financing for the transformation of the historic Terminal Warehouse into a 1.2 million high-performance workplace and retail destination.

With the loan package — the largest construction financing to date in New York City in 2021 — now secured, L&L and Columbia are ready to commence major construction.

In collaboration with architectural firm COOKFOX, L&L and Columbia are converting Terminal Warehouse’s 550,000 s/f of self-storage space into modern, Class A offices while also reimagining its ground floor retail and common areas.

As part of the project plan approved by the New York City Landmarks Preservation Commission in January 2020, floor area will be removed to make room for the new courtyard, a series of double-height interior spaces throughout the western portion of the building, and six new office floors with floor-to-ceiling glass overlooking the Hudson River. The project is estimated to be completed in 2023.

L&L President & Chief Investment Officer Robert Lapidus said, “Our ability to secure financing in this current environment is both a testament to the merits of this project as well as a show of the investment community’s continued faith in the future of New York City’s economy.”

“We are thrilled to be a part of writing the next chapter in Terminal Warehouse’s remarkable 130-year evolution,” added Columbia Property Trust CEO Nelson Mills. “This exceptional redevelopment project offers us a unique opportunity to create an unparalleled workplace experience for high performance, growth-oriented companies, while also contributing significantly to the 21st century vibrancy of the surrounding West Chelsea neighborhood.”

“The closing of this loan kicks off a new project phase for us,” said L&L Principal Andrew Staniforth, who oversees the Terminal Warehouse redevelopment. “The last three years have been one of the most exciting explorations into the history and possibility of this amazing Chelsea landmark, and in the coming months we are going to start seeing it all come to life – transforming a purpose-built warehouse and distribution facility into a modern workplace perfectly tailored for New York’s future generations.”

Built in 1891, Terminal Warehouse occupies an entire Manhattan block from 11th to 12th Avenue and 27th to 28th Street.  As the first major New York City facility with direct access to the river, streets and rail lines, the building initially served as a vital transfer point for goods heading into and out of the city. The property’s most distinctive characteristic is the tunnel with a twin set of rail tracks, which runs through the center of the facility and originally offered a direct connection from the Hudson River’s docks to the freight lines operating at street level along 11th Avenue. This tunnel also housed the famous Tunnel nightclub in the 1980’s and 1990’s.

The 670 ft. long train tunnel that traverses the length of the building will be restored, uncovering elements of the property’s history such as its original wood, brick archways and exposed rails, and activated with shops, restaurants and other 21st century amenities.  L&L and Columbia also plan to restore the monumental recessed arched entrances located on 11th and 12th Avenues.

A major focal point of the preservation and redevelopment plan will be the historic timber that was incorporated throughout Terminal Warehouse during its original construction. L&L and Columbia will save, reclaim and showcase as much of the interior’s heavy timber as possible while still adhering to modern building codes.

CBRE arranged the financing package on behalf of the joint venture. Terms of the loan were not disclosed.