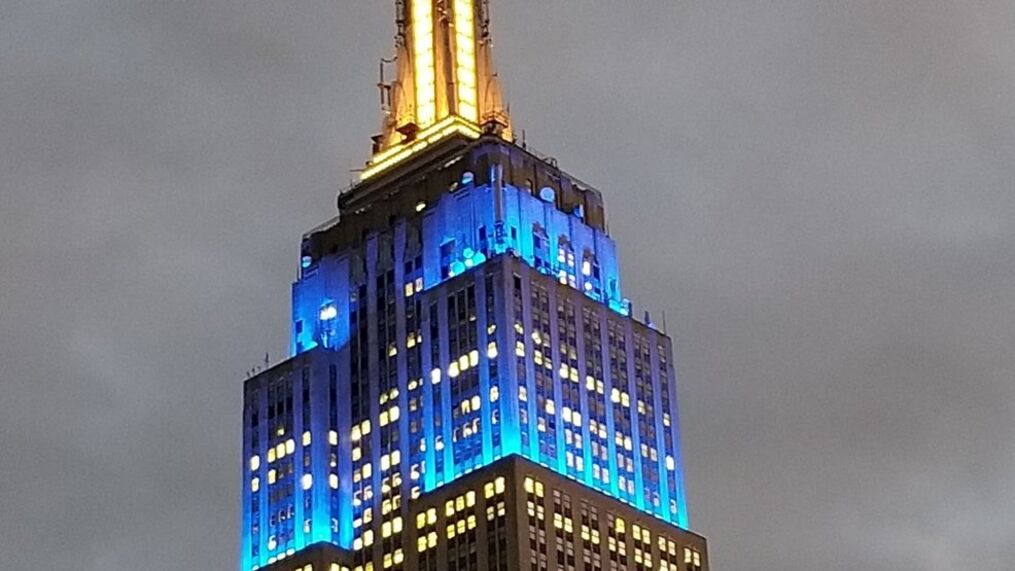 City landmarks including the Empire State Building will light up blue and gold tonight (Tuesday) as New York celebrates a lifting of all but a few of the strict COVID restriction that have crippled the economy.

Mayor Bill de Blasio also announced that the city will hold a ticker tape parade for the workers who helped New York fight the coronavirus as well a simultaneous fireworks shows around the state.

The Hometown Heroes parade will take place at 11:00 a.f on July 7, 2021, beginning by by Battery Park, travelling along the Canyon of Heroes, and ending with a ceremony in City Hall Park.

“We can never thank our essential workers enough for all they’ve done for this city. But we can celebrate their heroism in our streets – and put on a safe, dynamic, unforgettable parade to show our appreciation,” said Mayor de Blasio.

“Thanks to these essential workers, we’ve fought back COVID-19 and we’re on our way to building a recovery for all of us. I can’t wait to march alongside them.”

“New York’s essential workers more than deserve to be honored with a ticker tape parade down the Canyon of Heroes,” said US Representative Carolyn B. Maloney, “I look forward to celebrating and thanking the incredible New Yorkers who kept this city going throughout the COVID-19 pandemic.”

The mayor made an early promise of a parade as the city battled COVID and he said the doctors, nurses, first responders and frontline workers invited to take part will become the 208th recipients of a plaque embedded on the traditional parade route.

It will be just the third parade de Blasio has called since taking office — two in honor of World Cup victories by the U.S. women’s soccer team.

The tradition dates back to 1886 and, since then, New York City has honored athletes, astronauts, military heroes, foreign leaders and others.

Council Member Margaret Chin, said the parade would be a fitting tribute.
“Historically, so many of these workers are underpaid because their work is unfairly mischaracterized as unskilled labor,” she said. “The New Yorkers who delivered your groceries, cooked your takeout food, or drove you to your appointments deserve to be recognized not just for their contribution to our city’s economy, but because we rely on them to keep our city running.

“These New Yorkers risked exposure to a deadly virus during a global pandemic while so many others had the privilege of staying at home. As the city reopens we must continue to respect and advocate for these workers, and it is our honor to march alongside them.”

As well as lighting up 13 state landmarks, cities around the state are also holding simultaneous fireworks celebrations beginning at 9:15 p.m.

The 10 designated locations for the fireworks shows tonight are: