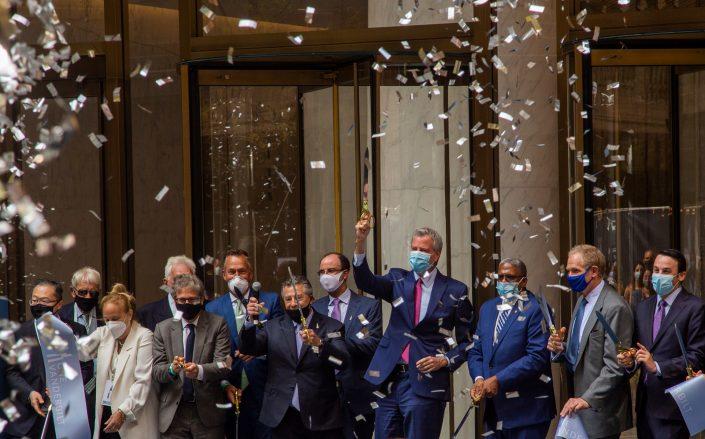 Some of New York’s leading commercial landlords are joining the campaign to get the city back to work.

As part of the initiative, the landlords have committed to provide space and facilitate access to testing services for tenants interested in conducting regular diagnostic testing of their employees.

“From the beginning of the pandemic, New York has always said that our recovery is not a choice between public health and the economy – it has to be both – and with this partnership we are demonstrating just how effectively we can accomplish our goals,” Governor Cuomo said.

“This new partnership with major commercial real estate companies is the next step in reinvigorating our urban cores and commercial offices, supporting state and regional economies. Improved access to testing will further drive New York State’s economic recovery by encouraging employers and employees to safely return to work using science and data to guide their decisions.“

The partnership will expand testing, which is experts agree is critical to controlling the spread of the virus, and provide workers with additional confidence in the safety of their workplaces as New York resumes and increases economic activity.

Upstate, 13 landlords are taking part and the Empire State Development continues to work with more commercial property owners to expand the program.

“Returning workers to the office is critical to New York City’s recovery, which is why our entire SL Green team has been safely 100 percent back in the office since June and all of our office buildings have remained open and accessible to our tenants through the pandemic,” said Marc Holliday, chairman of SL Green, Manhattan’s largest office landlord.

“With spring approaching and the vaccination process well underway, we are implementing this innovative new testing program to make it easier for companies to return to work and expedite the recovery we know is coming.

We look forward to seeing our tenants back in greater numbers in the coming months.”

SL Green has identified at least 21 locations, representing more than 200,000 s/f of space that SL Green is making available, free of charge, for use as temporary testing centers.

SL Green has contracted leading testing provider, Mobile Health, for its testing locations and has negotiated preferred testing rates for all tenants within the SL Green family.

All of SL Green’s nearly 900 tenants will be able to receive testing beginning April 8 as an additional measure to instill confidence in the safety of returning to offices.

The campaign comes as the de Blasio Administration prepares to bring city workers back to the office beginning May 3.

The New York Times reported Tuesday that the city is finalizing a plan to compel some 80,000 municipal office employees to report to work in person during a several-week phase-in beginning May 3.

Morgan Stanley has also announced it will bring workers back to its midtown complex “when it is safe to do so.”

Managed security firm Kastle Systems has been tracking office work patterns throughout the pandemic and last week reported that a quarter of the nation is back in the office.

Half of the cities measured on the Kastle Barometer saw increases in building occupancy last week, bringing the 10-city national average up to 25 percent, up 0.2 percent from the week before.

In New York City, 15.7 percent of office space is currently occupied, a number that has been ticking up at slowly over the past few months.

As of January 2021, more than half a million New York City residents were jobless and new weekly unemployment claims are still almost three times higher than one year ago.

According to Comptroller Scott Stringer, as of early March, small business revenue is still down 55.8 percent since the beginning of the year.

There are signs of progress, according to Stringer. As of March 18, more than three million COVID-19 vaccines have been administered in New York City, and on March 12 subway ridership crossed 1.9 million, the highest level since the start of the pandemic.