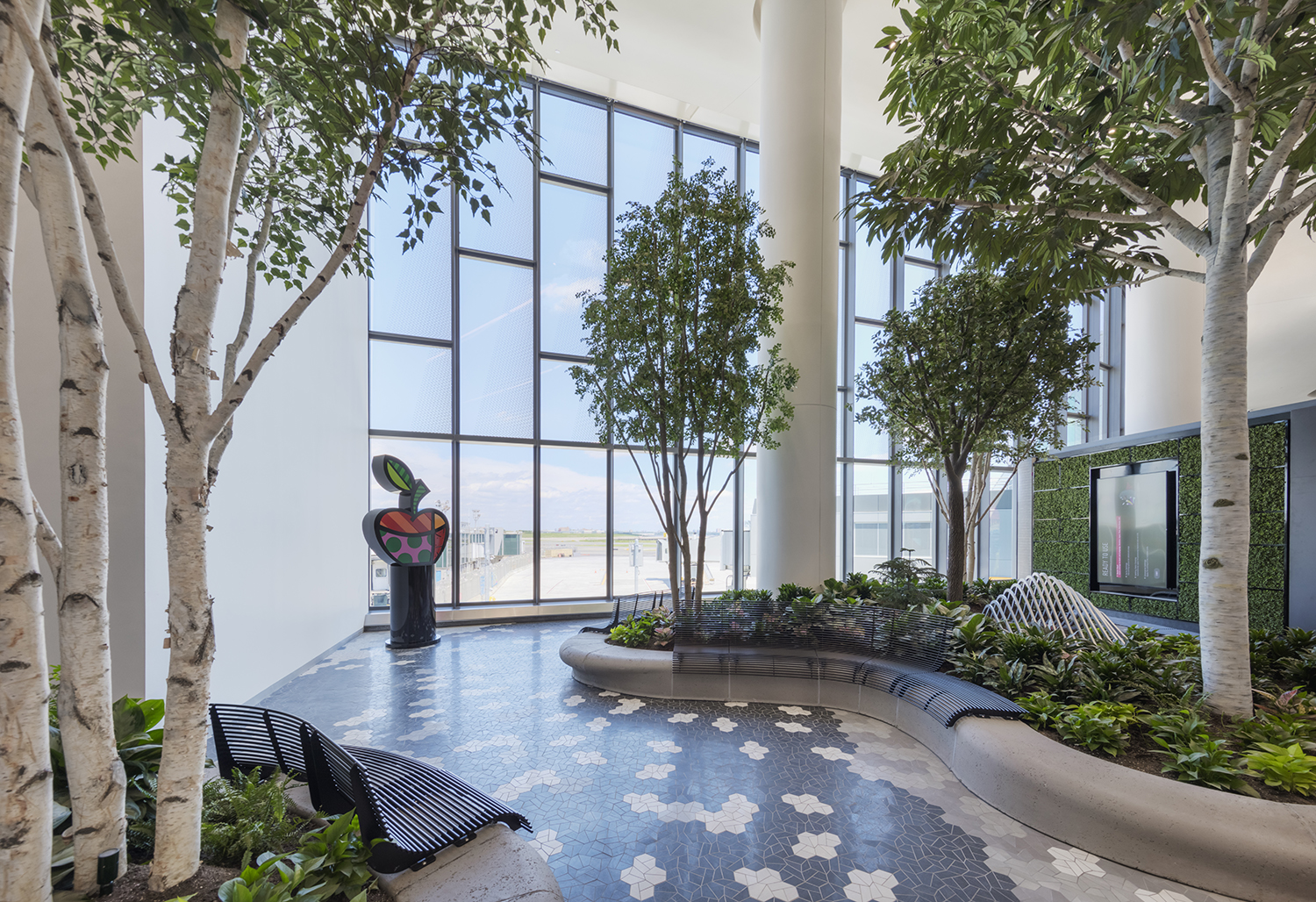 Skanska is the lead partner of the Skanska-Walsh Joint Venture responsible for the construction and design, in partnership with HOK and WSP, of the new Terminal B.

Skanska is also a founding member of LaGuardia Gateway Partners, selected in 2015 by the Port Authority of New York and New Jersey to deliver and manage the redevelopment project – a key component of the ongoing $8 billion transformation of LaGuardia into a unified, 21st century airport.

Servicing American Airlines, the seven new gates within the 250,000 s/f, four-level Western Concourse will open to the public on August 5, 2020 – one month ahead of schedule.

The gate has 55 ft. high ceilings and floor-to-ceiling windows, modern restrooms and an indoor park with benches, landscaping and trees.

“We are thrilled to celebrate another significant milestone at LaGuardia Airport, our largest and one of the most complex projects in Skanska’s history,” said Richard Kennedy, president and CEO, Skanska USA.

“Opening these gates ahead of schedule with an exceptional safety performance is a testament to the diligence and tireless dedication of our team, subcontractors and partners — an exceptional feat in light of a global pandemic.”

The Terminal B Western Concourse is a near replica of the Eastern Concourse, which opened to the public in December 2018 and, by early 2021, will house a total of 18 gates with modern customer amenities, state-of-the-art architecture, and more spacious gate areas.

After the Western Concourse completion, Skanska-Walsh will have delivered 35 new gates for the new Terminal B.

“Today’s opening of the first seven new gates in Terminal B’s Western Concourse is part of 18 months of fast progress as we near the finish line of the complete transformation of LaGuardia Airport,” said Cotton.

“Thanks to Governor Cuomo’s vision and leadership, construction of A Whole New LaGuardia Airport continues full speed ahead with this summer’s opening of the new Arrivals and Departures Hall, the early opening of the new concourse and gates, and completion of nearly 75 percent of all roadway work due to the reduction in traffic.”

The Western Concourse opening follows the completion of the new Terminal B Arrivals and Departures Hall (Headhouse) which opened in June.

The Headhouse is the central entry point for travelers flying out of Terminal B providing integration to passenger concourses and gates, the new parking garage, and the forthcoming Central Hall which will connect to Terminal C and the planned future AirTrain.

In July 2018, Skanska-Walsh opened its first new flyover roadway to LaGuardia from the Grand Central Parkway’s Eastbound Exit 7, the primary roadway or overpass for vehicles accessing the airport, which greatly improved traffic flow and congestion.

The next major milestone for the Terminal B project will be the completion of 11 additional gates in the new Western Concourse (bringing it to 18 total) in early 2021. Other outstanding work includes the completion of the Central Hall building that will connect Terminals B and C; the demolition of the old Central Terminal Building that is being replaced; and enabling work to finalize the new airport traffic configuration.

The New LaGuardia Terminal B

The redevelopment at one of the nation’s busiest airports began in 2016 and is the largest public-private-partnership (P3) in U.S. aviation history and one of the most complex projects ever undertaken by Skanska. Through close collaboration with the Port Authority and other stakeholders, Skanska developed a multi-phase construction plan that allowed for the ground-up construction of a brand-new terminal on a small geographic footprint, all without disrupting operations of the existing facility.

Under this plan, old facilities are demolished only as new facilities are completed to ensure the airport – which handled a record 31 million passengers in 2019 – never loses capacity. For example, the new Headhouse sits in the footprint of what was the old P2 Parking Garage. To make room for the Headhouse, Skanska first constructed a new, seven-story Terminal B Parking Garage – which opened in February 2018 – allowing for the demolition of the old facility.

Skanska’s inclusion of minority-and women-owned (MWBE) businesses on the LaGuardia redevelopment represents the largest partnering with MWBE firms to date on a single contract in New York State history. Skanska is proud to have led a robust outreach, contracting, and training effort resulting in exceeding the $687 million MWBE participation goal.

Skanska has a long history of engaging the MWBE contracting community to support the growth of their businesses. Since 2006, Skanska has offered the Construction Management Building Blocks (CMBB) program designed to equip MWBE firms with tools and resources to become successful as MWBE contractors and pursue opportunities on major infrastructure projects like LaGuardia. To date, the program has provided 9,586 hours of training to 378 registered firms across the New York Metro Region. Between 2016 and 2018, Skanska-Walsh has offered three CMBB training programs built around opportunities on the LaGuardia redevelopment.

Building What Matters – Investing in Healthy and Sustainable Communities

The P3 model employed for the redevelopment allowed Skanska to work closely with the Port Authority, LaGuardia Gateway Partners and other stakeholders to implement industry-leading sustainability practices across all aspects of the projects. In August 2019, the Institute for Sustainable Infrastructure (ISI) recognized these efforts by awarding the Terminal B redevelopment with the Envision Platinum Certification, the highest level of recognition within ISI’s awards program – a designation recognizing projects that lead the industry in their approach to sustainable and resilient infrastructure development.

This was the first project to achieve recognition from ISI at any level under its newest and most stringent Envision v3 framework, which evaluates projects across five categories and 64 sustainability criteria to produce a holistic view of the project’s commitment to leading-edge, sustainable practices.

The Skanska-Walsh Joint Venture identified many opportunities to employ sustainable building approaches, including developing systems to reduce waste, reuse and recycle materials, and ultimately minimize the project’s environmental footprint. For example, during the demolition of the original parking garage, the Skanska-Walsh team was able to recycle 21,604 tons of concrete from the demolition of the original parking structure. Of this recycled concrete, 2,475 tons – roughly five million pounds were reused on the adjacent job site. Overall, 99.92 percent of debris removed from the old parking garage was recycled.

The Envision Platinum award also recognized the project’s comprehensive community engagement efforts. In 2017, Skanska-Walsh established the Connect Committee, a group of Skanska-Walsh team members who have initiated dozens of community programs ranging from cultural events to outreach partnerships with nearby shelters and pantries, to an eight-week academic program teaching local students the fundamentals of 3D virtual design.

The Tenant Safe Harbor Act has gone too far