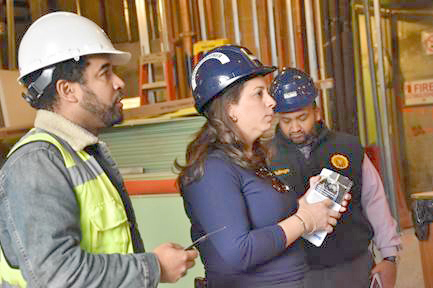 The Department of Building is set to carry out a sweep of the city’s biggest construction sites after three workers were killed on the job in the past two weeks.

“The recent spate of construction worker deaths in our city is tragic, senseless – and even worse, entirely avoidable,” said Commissioner Melanie La Rocca. “Department inspectors have been directed to sweep work sites around the city, and unsafe conditions will be met with zero tolerance. The death of even one construction worker is wholly unacceptable.”

In the last two weeks, three construction workers in New York City lost their lives in separate work-related incidents. Two of these fatal incidents were the result of worker falls. One worker fell to his death from a scaffold at a building under construction in Queens while a second was killed when he slipped off the roof at the Flatbush Bank Building in Brooklyn, which is being converted to a mixed-use property. A third worker was killed and his colleague injured when the elevator they were in plummeted through the shafts of a Bronx building where they were part of a renovation team.

Commissioner La Rocca said she has mobilized teams of DOB enforcement inspectors across the five boroughs to perform safety sweeps of the city’s larger and more complex construction sites, to ensure that they are safe for both workers and the public.

While performing these zero tolerance sweeps, DOB inspectors will issue enforcement actions if they observe any safety violations and will shut down sites if they find serious safety lapses. Inspectors and community engagement teams will also be distributing “Worker Alert” safety information at construction sites on the dangers of worker falls.

During the sweep, DOB inspectors will be conducting site visits at thousands of construction work sites in neighborhoods across the city. Contractors who are found to be putting their workers at risk by flouting safety regulations could face penalties of up to $25,000 for each construction safety violation.

At each work site, the DOB will specifically be:

Ensuring that permitted construction projects are in full compliance with their required site safety plans.

Checking that workers on site are properly using safety harnesses and fall arrest systems where required.

Last month, the Department announced that five new construction safety bills we support were introduced for consideration in the New York City Council. If adopted, these consequential bills would greatly enhance oversight and accountability on construction sites in our city by licensing general contractors who perform construction work, requiring more site safety supervision at larger work sites, strengthening requirements for cold-formed steel construction, and permanently banning the dangerous use of stand-off brackets for suspended scaffold work.

These construction safety efforts spearheaded by DOB led to a 34 percent decrease in injuries on building construction sites in New York City from 2018 to 2020.

NYC brokers getting their groove back