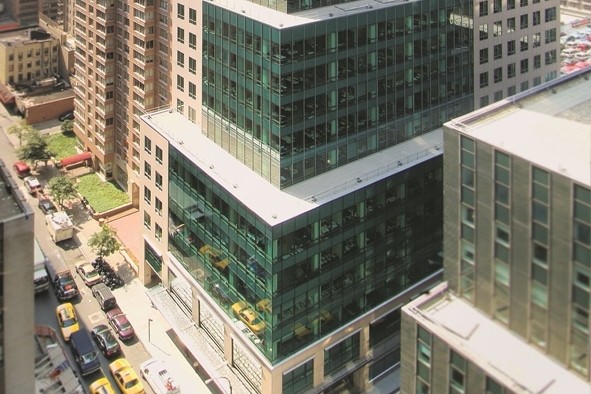 The NYU Langone Medical Center is moving to its new Midtown facility at least two months early. The hospital network, which signed a 30-year full-building lease at Columbia Property Trust’s 222 East 41st Street, is expected to move in on November 1.

NYU Langone was supposed to move to the facility on January 1 of next year, two months after the previous occupant, law firm Jones Day, was expected to vacate. However, the timeline was accelerated after Jones Day paid an early termination fee of $6.2 million. Jones Day left the building on June 30. The termination fee amounted to four months of rent.

“Our financial results for this quarter were affected by the Jones Day lease at 222 East 41st Street in New York. As you may recall, this lease was scheduled to expire on October 31 and we indicated that you should expect a replacement lease with NYU to begin about January 1 of next year after a couple of months of downtime,” James Fleming, the company’s chief financial officer and executive vice president, said in an earnings call on Thursday.

“We were able to improve on this by terminating Jones Day on June 30, which will allow us to complete our base building work and begin the NYU lease before the end of the year. The agreement with Jones Day included a lease termination payment of $6.2 million, which would equal the four months’ rent and we now expect the NYU lease to begin by November 1 and possibly as early as October 1. So we will have essentially no downtime between the two leases.”

NYU signed a lease for 390,000 s/f of space in the building last April. This amounts to more than half of the 604,000 s/f of leasing that Columbia registered during the second quarter. In its financial results, the company also announced that it is in contract to sell the 961,000 s/f 80 Park Plaza property in Newark, New Jersey.