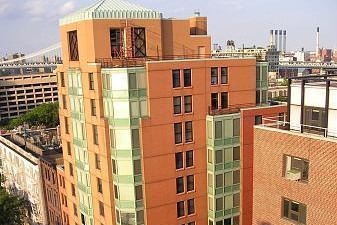 The Jehovah’s Witnesses are set to add just under $80 million to their billion-dollar haul from the sale of their Brooklyn portfolio.

The 12-story building is 88,610 s/f and currently contains 97 residential units, as well as 30 parking spaces. It has views of New York Harbor, the Manhattan skyline, and Brooklyn. 117-125 Columbia Heights is made up of three townhouses in the Brutalist architecture style. The five- story building is approximately 53,629 s/f and served the Witnesses for years as a combination of residential, office, and amenity space.

Jared Kushner partnered with CIM Group and LIVWRK to buy 25-30 Columbia Heights for $340 million and is in the throes of converting the former Watchtower complex to a new mixed-use complex called Panorama. The partnership also bought 85 Jay Street for $345 million. Clipper Equities paid $87 million for 107 Columbia Heights and is turning it into condos.