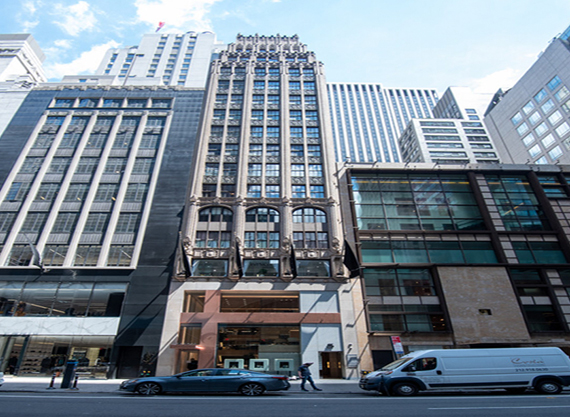 Joseph Aquino, president of JAACRES, represented the tenant in the lease for the space on the 20th floor of the building (pictured top) on the tony Plaza District block where neighbors include Chanel, Dior and Louis Vuitton.

Owned by an LLC affiliated with the Duell Family, 5 East 57th Street is a 22-story office property built in 1920. Its tenants are focused on the fashion and beauty sector and include jeweler David Yurman and handbag designer Nancy Gonzalez.

According to Aquino, Mandelli was eager to relocate from its space at 576 Fifth Avenue to “a more luxury address.”

Renee Citera, of Duell Management, represented the landlord in the lease of the 3,000 s/f space.

Amas, a theater company that recently celebrated its 50th anniversary, has leased a 2,500 s/f space at  The Film Center Building at 630 Ninth Avenue.

The company was founded by actress Rosetta LeNoire Estelle to promote interracial and color-blind casting and has produced over 60 original musicals, many of which have gone on to Broadway, including Bubbling Brown Sugar, which received a Tony Award nomination in 1976 for Best Musical.

According to Aquino, the growing company was on the hunt for a bigger space and the Film Center Building offered an ideal opportunity to expand. Matthew Mandel and Susan Negro of GFP Real Estate represented the landlord in the lease.

Finally, Aquino brokered lease for 600 s/f at 2454 Main Street in Bridgehampton for Organic by John Patrick, a company the creates ethical, organic, and sustainable clothing for women.  Josh Roth, at Manhattan Skyline Management, represented the landlord in the lease.

Former EDC boss to lead $1B expansion by landlord, A&E