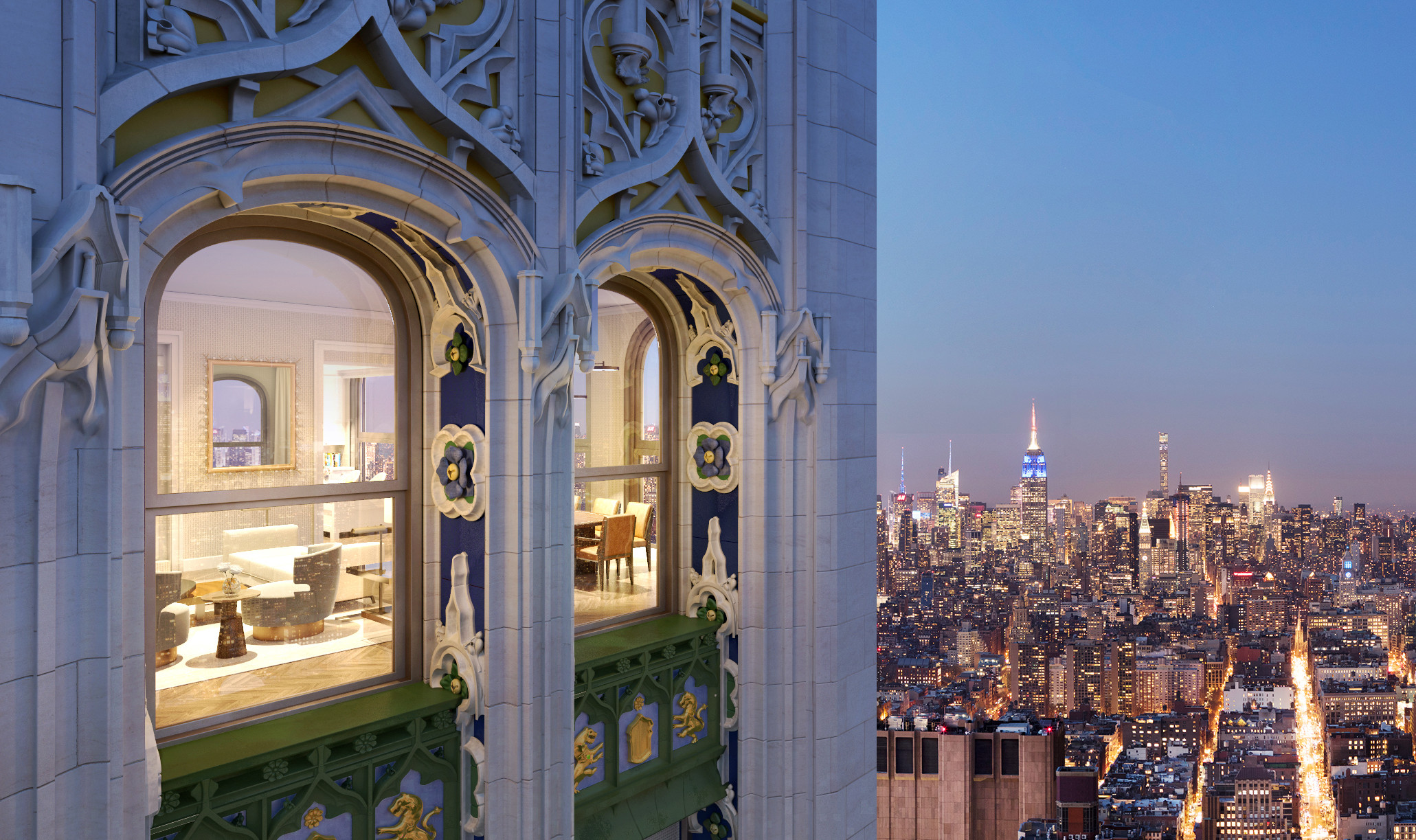 The Woolworth Building in Lower Manhattan has been a distinctive part of New York City’s skyline for more than a century.

Most New Yorkers could spot it in a lineup, along with other iconic skyscrapers like the Chrysler Building, the Empire State Building, and 1 World Trade Center. But next year, its history is about to get even more interesting, when the top portion of the building is transformed into luxury apartments.

Alchemy Properties president Ken Horn bought the upper portion of the Woolworth Building in 2013 from the Witkoff Group and Cammeby’s International for $68 million in an unusually quick deal. In this case, it was all about who you know that led to the deal getting done.

“When we first looked at it, it was more out of curiosity to see what it looked like,” Horn told Broker’s Weekly. “But when we got in there, we realized it was a true gem.”

Alchemy signed a contract, financed the building and closed within just 43 days. However, when it came to assembling the team that would do the work on the famed building, Horn spent nearly a year choosing the team.

“It’s a great responsibility because of the building and because of where it’s situated and how it’s known in the world,” he said. “When we bought it, we realized we had a lot of hurdles to overcome in terms of restoration and landmarks consent, and we put together a team that was really going to work with the building and embrace it for what it is.”

Originally built between 1910 and 1912 for $13.5 million, the 58-story Woolworth Building – nicknamed “the Cathedral of Commerce” as a nod to its Gothic cathedral-influenced design and tenant history – was at one time the city’s tallest building. It was designated a National Historic Landmark in 1966, and a New York City landmark in 1983.  Located at 233 Broadway, It was designed by the famed architect Cass Gilbert in neo-Gothic style, and constructed with a terracotta facade. Finding the right material and the right expertise proved to be one of the challenges Horn faced in restoring the building’s facade – the terracotta replacement alone took $20 million.

Out of the 31 buildings Horn has developed in New York City over his career, he admitted the Woolworth Tower Residences has been the biggest challenge.

“It’s an overwhelming responsibility, and I think we’re doing it right,” said Horn. “I think we learn something every day. It’s coming out beautifully and when we finish it in about 14 months or so it will be phenomenal.”

One of the things that makes the project so challenging is the building’s landmark status. Construction crews can’t risk building a hoist along the side of the building, and instead have to have internal hoists in the building.

CNY Group president Ken Colao is in charge of the construction of the Woolworth Tower Residences. When his company first got involved with the project, he was able to secure a set of the original steel shop drawings by Bethlehem Steel from 1912.

“They were literally blue prints with white lines, the original documents,” said Colao. The team built on the vintage blueprints by using modern day technology to fully understand the dimensions and the ins and outs of the building. By using a 3D laser scan, they were able to see potential clashes and conflicts on the new design versus the existing design.

Colao and his team were challenged with changes in zoning and egress over the years, bringing all systems up to current codes, and not to mention doing all the renovation work in two small internal hoists.

The construction team had to remove two existing elevators and completely reconstruct the shafts so they could be used temporarily as hoists for building materials and construction workers, a process that took a total of two years to complete.

“It’s certainly one of the most complex renovations we’ve done,” said Colao, who also called the project “very exciting.”

The Woolworth Tower Residences will have 33 units starting on the 29th floor of the building, while floors 28 and below will remain as commercial office space.

Prices will range from $4.57 million for one-bedrooms, to $26.4 million for a full-floor residence.

Amenities include on-site parking in the building’s attended garage, a 24-hour doorman and concierge, an indoor pool with spa features as well as a sauna and hot tub, an entertainment lounge on the 29th floor, a fitness studio on the 30th floor, bike storage, and a wine cellar with a tasting room for residents.

The apartments are expected to be completed in the fourth quarter of 2017, but the building has already made headlines for the potentially record-breaking price of the penthouse, which back in 2014, was reported to be $110 million. However, the penthouse has not been officially listed yet.

Originally, Alchemy was marketing the units in-house, but after six months they decided to bring in veteran Sotheby’s International Realty broker Stan Ponte in April to help ramp us sales.

“In my opinion it’s a natural fit, because the Woolworth Tower is so iconic and globally recognized, that partnering with a brand like Sotheby’s, globally iconic as well, is just a perfect match of brand,” said Ponte. “This is a very special moment for me in my career.”

Since joining the project, Ponte said the team has made some adjustments to the floor plans to create bigger, more loft-like and open layouts. Rooms have 15-foot ceilings, and three-bedroom homes have 3,400 s/f.

“What we’ve done is met the market of downtown buyers, who in the luxury category are looking for large entertainment space,” he said. Ponte describes the interiors of the units as “downtown chic and elegant at the same time.”

In renovating the building, Horn and the team looked to capitalize on the panoramic views the building provides, and made sure every unit has several views looking in different directions.

“We decided to make our units larger and grand in scale to accommodate what we believed was the grandeur of the building,” said Horn. “We didn’t want to cut these into cookie cutter layouts.”

Ponte said they have received “exceptional” response from interested buyers, and the team is expecting to have two model apartments and a sales center completed by the end of January.