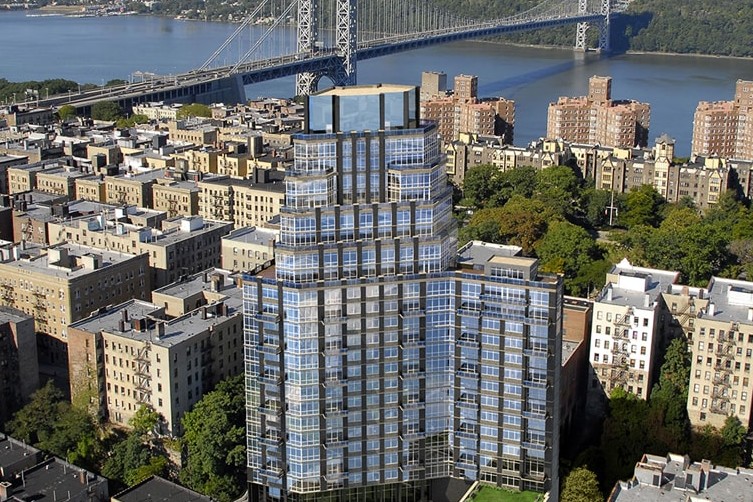 A giant hole in the ground that’s been an eyesore and an aggravation to residents of Hudson Heights in northern Manhattan for over a decade is set to be sold at auction.

Ariel Property Advisors has been retained to run a UCC foreclosure on the site known as One Bennett Park that once promised a trailblazing luxury apartment complex but instead left a synagogue displaced and neighbors staring at bedrock.

The 145,997 s/f site at the intersection of Overlook Terrace and West 184th Street has approvals in place for a new apartment development that could hold up to 200 apartments in a 16-story building.

The only caveat is the buyer must create a new home for Fort Tyron Temple Beth Sholom, whose congregation has been displaced since the synagogue sold its air rights for $1.9 million to One Bennet developer, Ruddy Thompson, back in 2005.

The site on Overlook Terrace was assembled in the early 2000s by then market newcomer, Thompson. Bedrock was blasting as the housing bubble raced towards its burst and then, for the next 13 years, nothing.

The project has been stalled and in and out of litigation as Thompson has battled bankers over more than $100 million in loans packaged for the project over the years.

The courts ultimately ruled that the lenders – Amalgamated Bank  – can foreclose on Thompson to recover what money they can.

On August 15, the site will be auctioned at the Manhattan office of Kramer Levin Naftalis & Frankel LLP, located at 1177 Avenue of the Americas.

“The auction is bringing attention to what I believe to be one of the best kept secrets in Manhattan,” added Sozio. “Hudson Heights is a fantastic location with a real sense of community and where there has been little new development taking place.”

In recent months, developer Leo Tsimmer has filed plans for nine-story, 95-unit building on Wadsworth Avenue and Sozio himself in is contract with a $20 million plus site on Edgecombe Avenue.

More than 100 Toys “R” Us stores to be auctioned off