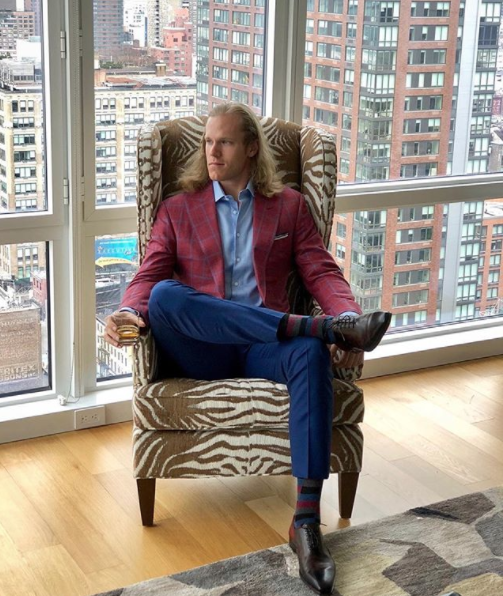 The Modern Family star and his husband, lawyer Justin Mikita, have lived in the one bedroom, 2-bath at 200 East 16th Street since 2015.

They renovated the 900 s/f co-op, installing a Carrara marble kitchen with a hidden pantry closet, beamed ceilings in the living room and a custom reading nook with french doors.

Ferguson has tapped his old pal Sarah Saltzberg of Bohemia Realty to sell the apartment.

The pair have been friends since 2005 when they performed in The 25th Annual Putnam County Spelling Bee which earned two Tony’s and a Grammy.

Saltzberg has listed the apartment for $1.495 million after helping the activist couple relocate to a new pad “downtown.”

DOUGLAS ELLIMAN agents Lisa Poggi and Neal Sroka have a buyer for Eli Manning’s Hoboken home. The brokerage has been telling news outlets they sold the Hudson Street condo for $3.55 million — the most expensive price ever paid for a condo in the Mile Square City.

In 2005, Manning and his wife Amy paid $2.2 million for two combined apartments in the former Lipton Tea Building converted by Toll Brothers. As their family expanded, they added a third unit for $535,000 in 2011.

The luxury home with jaw-dropping Manhattan views has been on the market for nearly two years at $4.2 million.

The Mets pitcher, nicknamed Thor, has moved into Sky, the largest rental building in the country.

Syndergaard’s corner, two-bedroom, 2-bath has views of the Hudson River and he has access to a slew of amenities that have attracted a high-profile roster of sports stars to the building.

Past residents include Mets teammate AJ Ramos, and Sasha Vujacic and Kristaps Porzingis of the New York Knicks. Musical sensation Fergie also stayed at Sky this past year.

“Between all of the amenities, the great concierge, and the amazing views of the city, Sky is an incredible place to call home,” said Syndergaard (below). “With the world-class gym, complete with an organic café, I only have to leave the building for Mets games. I love it.”

Texas-born Syndergaard made his debut for the Mets in 2015 and was named to the National League All-Star team in 2016.