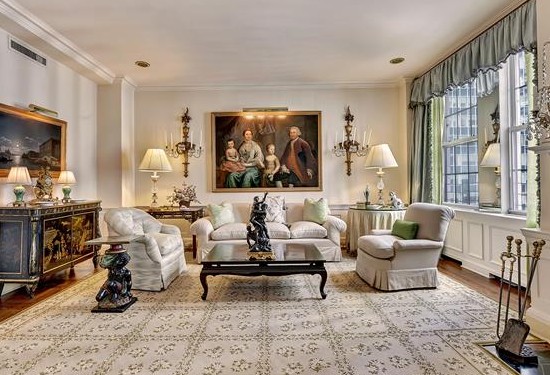 HAVE YOU HEARD? Scarface producer lists with Rutenberg

“This is an exceptional opportunity to own a piece of Hollywood history – right here in New York,” said Rutenberg president Stefani Markowitz.
“From an aesthetic point of view, the apartment at once showcases classical European style with a modern Manhattan sensibility – another rare combination that is hard to come by in this market.
Listed for $9,999,000 the apartment has a dining salon and grand living room with a decorative fireplace. There’s a butler’s pantry off the windowed eat-in kitchen and a library room with its own built-in wet bar and movie projection.
Bregman has produced a plethora of American crime dramas including Scarface, Dog Day Afternoon and Carlito’s Way.

Justin Bieber is on the hunt for a short-term NYC rental.
His team has been calling city brokers with some sweet listings, like the $11 million loft at 285 Lafayette Street, the building that rock legend David Bowie called home.
The classic 4.5-bedroom, 3.5-bath loft number #2B has 10-foot windows, 12-foot ceilings, cast iron columns and exposed wooden beams.
Jessica Campbell of Nest Seekers International is about to list the apartment, which is currently leased but which the owner is eager to sell.
Bieber was most recently in New York for a concert at Madison Square Garden and, reportedly, a date night with ex girlfriend Chantel Jeffries.

Sarah Saltzberg of Bohemia Realty Group will take part in the annual Women Who Wow empowerment brunch on September 17.
The event — at Row House, 2128 Frederick Douglass Blvd. from 12.30 to 3.30 p.m. — will include advice columnist Harriette Cole and Harlem-based women business leaders and will benefit the local community-based Three and a Half Acres Yoga (THAY).

Saltzberg, an award-winning playwright and actress, said, “THAY empowers people, young and old, through the benefits of yoga. For years, it has been bringing yoga classes to underserved communities throughout Upper Manhattan and I am delighted to support their efforts.”For event details, go to www.womenwhowow.mydagsite.com

Serhant has designs on Brooklyn market