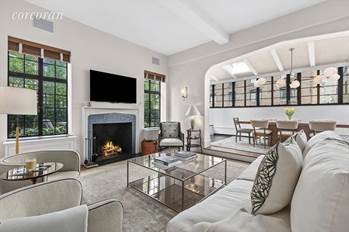 There is a library with moving ladder, open living/dining room and kitchen with Viking stove and Subzero fridge. The L-shaped loft opens through to a family room.  Modern touches include multi-zone air conditioning and plantation shutters.

Jim Moorehead of Triplemint has listed the loft at $2.8 million.

Actor Jon Hamm and Jennifer Westfeldt are looking to rent out their Upper West Side penthouse apartment.

Hamm and Westfeldt, who broke up in 2015, continue to have joint ownerhsip of a two-bedroom, two bathroom unit at 40 West 67th Street. They are now looking to rent out the home for $14,995 per month.

According to a previous report from Variety, the apartment has about 1,000 s/f of interior space. There’s also a park view terrace that almost wraps around the entire home. The unit contains a wood-burning fireplace, built-in Sonos speakers in every room and custom millwork throughout.

The home is inside a 39-unit landmarked co-op building designed by Rosario Candela. Hamm and Westfeldt bought the unit in 2014 for $2.45 million. They completed renovations later that year.

Hamm, who is best known for playing Don Draper in the TV show Mad Men, recently bought a house in the West Coast. He purchased a four-bedroom home in the Los Feliz neighborhood of Los Angeles for $3.4 million last April.

Douglas Elliman Real Estate agents from across the country came together for a charity cycling ride from New Canaan, CT to REINVENT, the firm’s annual conference.

For the fifth year, The 2017 Ride to REINVENT, led by the event’s founder, Max Dobens, Douglas Elliman’s Senior Regional Executive Manager of Sales for Brooklyn, raised funds for God’s Love We Deliver.