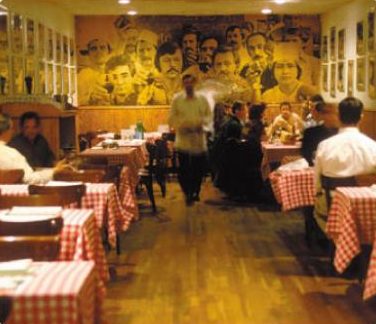 HAVE YOU HEARD? Legendary Italian restaurant goes to market

New York dining landmark II Vagabondo has come on the market along with the four-bedroom, 2,700 s/f luxury duplex townhouse that sits over the restaurant.

The destination Italian spot has seen the likes of Tom Hanks, Cindy Crawford, been praised by Emeril LaGasse and features its own bocce ball court.

Initially opened in 1910 as a social club, II Vagabondo has long been known for its chicken Parmesan and was a mainstay in the neighborhood for over 50 years.

Both the restaurant and the townhouse are being sold together by the family of the late restaurateur Ernest Vogliano.

THE Shelter Island home of photographer W. Radford Bascome, Jr, is for sale.

Bascome, who photographed some of the icons of modern dance and classical music during the 1950s and 1960s, built Pear Tree Acres in 1962, the first A-frame style home on Shelter Island.

Set on two acres close to Coecles Harbor, a long serpentine driveway leads to the three bedroom, 2-bath house on a hilltop surrounded by trees and shrubs, and one surviving original pear tree that still bears fruit.
Over the years, area artists have sketched the property with its colorful blue exterior trim and green and red interiors.

There is a carriage house and a studio where Bascome worked on his collection of books and photographs.
Penelope Moore, a broker with Saunders & Associates, has listed the property at $799,000.

Terry Naini at BHS has the listing.

Midtown skyscraper set to be a Monet maker