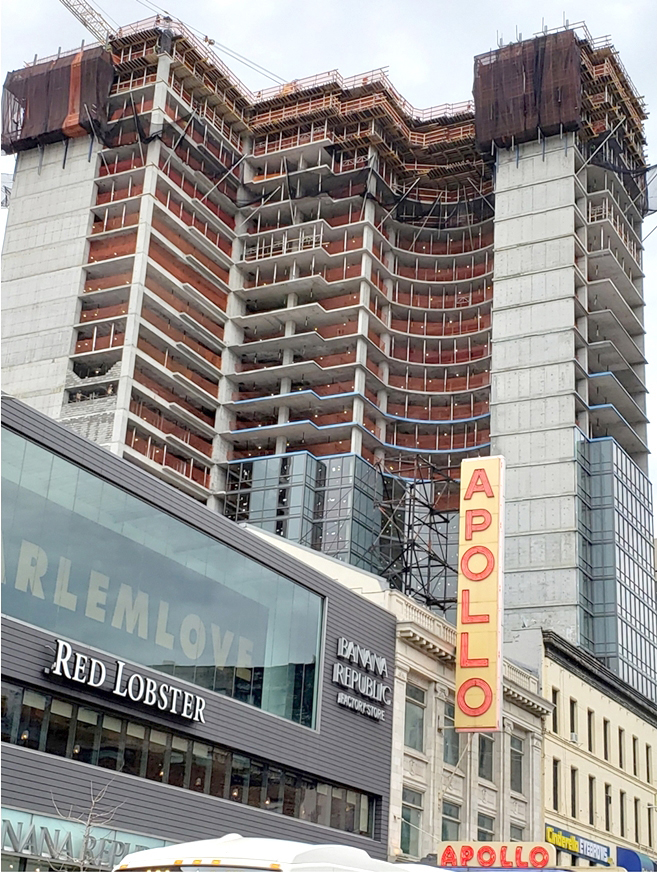 The developers of a mixed-use project that’s being touted as a part of the ongoing Harlem renaissance are seeking Opportunity Zone (OZ) investors.

Exact Capital and Lam Group, the team behind a $178 million project that includes a 211-room Marriott Renaissance hotel that topped off in July, the historic Victoria Theater and mixed-income housing, have put out an offering memorandum.

Eric Anton of Marcus & Millichap is marketing the deal.

The project, which includes a 27-story residential building with 191 apartments, 90 of which will be set aside as mixed income affordable housing,

The qualify for the Opportunity Fund, it must create 300 permanent jobs created and invest over $32 million in minority and women business enterprises (MWBE).

“OZ regulations are intricate,” said Exact in a written statement. “An investor must be at the table in order to determine an optimal structure for an OZ investment.”

The Victoria Theater’s original 1917 terracotta facade and ornate lobby, with a grand staircase, has been restored and will return to public use as the entrance to the new theater.

When complete, the lower floors will feature a 25,000 s/f arts center, as well as the offices of the Classical Theater of Harlem, the JazzMobile, the Apollo Theater Foundation, and the Harlem Arts Alliance. The development also includes 25,000 s/f of retail space, and the hotel will have a 5,000 s/f ballroom, the largest in Harlem.

Lee & Associates is currently marketing commercial space and tenants can take possession by late this year, according to an online listing.

A creation of the Tax Cuts and Jobs Act, the federal Opportunity Zone initiative allows investors to avoid taxes by rolling capital gains into so-called Opportunity Funds, which must keep 90 percent of their holdings in the designated zones. The idea is to steer money into impoverished areas while also freeing up capital that has long been tied up assets by providing a basis reduction of up to 15 percent on capital gains.