Boddewyn Gaynor Architects has redesigned the 15,000 s/f headquarters of the John Simon Guggenheim Memorial Foundation at 90 Park Avenue in midtown Manhattan.
The 90-year-old institution has been at its Park Avenue address for a half century, but until recently was a subtenant of Bristol-Meyers Squibb. It became a primary tenant last year. 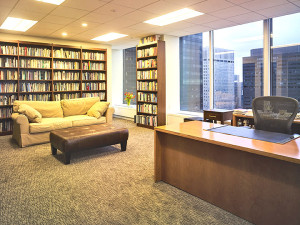 “Much has changed in the 50 years since the Foundation took space at 90 Park, and although our firm completed some necessary updates in 2007, the space needed to be redesigned for the 21st century,” said Michele Boddewyn, president of Boddewyn Gaynor.

It also had to be brought up to code, as the Foundation occupied the premises generally undisturbed during its subtenancy, yet many building code changes had occurred over the years.

Landlord, Vornado Realty Trust, took the opportunity under the new lease to move the Foundation to a temporary space in the building, while the original facility was demolished to allow for asbestos abatement, full sprinkler installation, bathroom renovation, including ADA compliance, and refurbishment of perimeter heating and cooling systems.

The design goal was to largely recreate the look and feel of the Foundation’s original offices. In addition, an ongoing need to feature the first edition books and artwork donated over the years by the Foundation’s fellows was integrated into the design.

The new layout was designed to foster communication between departments and maximize productivity.