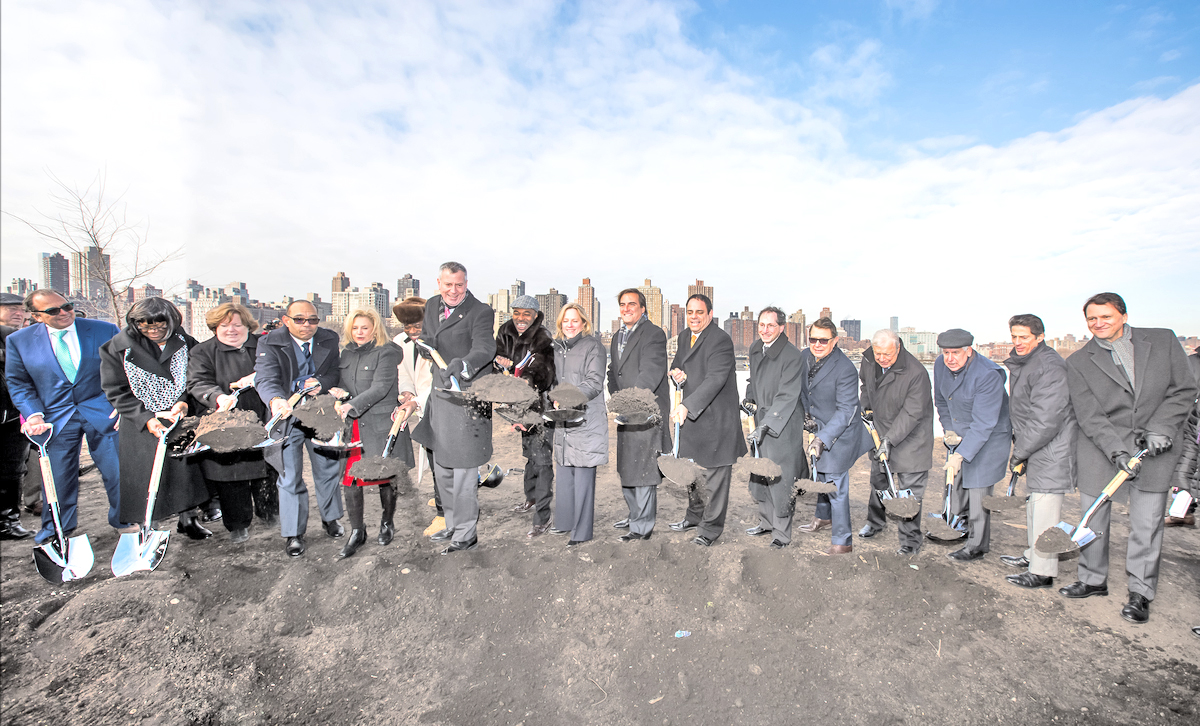 The Durst Organization broke ground on the new Hallets Point development in Astoria.

During a ceremony attended by Mayor de Blasio, HPD Commissioner Been, Queens officials, residents and Durst work started on the first building on the campus that will ultimately hold 2,400 apartments, 65,000 s/f of retail and space for a new school.

“This is an historic day for our family and for our new neighbors,” said Douglas Durst, chairman of The Durst Organization.

“In the 100-years of our company’s history we have never developed outside of Manhattan. We believe Hallets will be a model for community involvement, sustainability and large-scale mixed income housing development.”

The developer said his firm has worked “hand-in-hand” with Lincoln Equities the local community, elected officials and the residents of the Astoria Houses to plan to project.
Joel Bergstein, the president of Lincoln Equities Group who grew up near the site, said, “Hallets Point proves that large scale, transformational projects can still be done. We are very proud to have The Durst Organization as our partner to turn these grand plans into reality. As a Queens boy who grew up not too far from here, I am honored and humbled at today’s event.”

The first building which broke ground last week will open in 2018 and will include 405 units, at least 81 units of which will be affordable to low-income families.
The building will house a full-sized supermarket as part of the City’s FRESH program.

The overall $1.5 billion Hallets Point development will include approximately 2,400 units, including at least 483 affordable apartments for low-income New Yorkers.
Residents of nearby Astoria Houses will have a rental preference for 50 percent of all affordable housing units.

The project will include a number of state-of-art green features including onsite power generation and a waste water, or Black water, recycling system which will repurpose more than 130,000 gallons of water a day.

The project is a joint venture of The Durst Organization and Lincoln Equities Group LLC, who guided the project through its seven-year approval process.
The 2.5 million square foot project includes seven residential buildings including two buildings that will be 100 percent affordable.

The affordable buildings are being developed in partnership with the Jonathan Rose Companies. The project includes 65,000 square feet of retail and community-use facilities, a site reserved for the construction of a new K-8 public school.

“This has to be a city for everyone, and that’s what we’re doing every day as we build a new generation of affordable housing for families in need. We’re thrilled to get shovels in the ground and bring a long-awaited addition to this community to fruition,” said Mayor de Blasio.

“This is a project that delivers for the nearby Astoria Houses and strengthens this community with a new school, open space and a supermarket. I congratulate our fellow Queens officials, the local residents and the development team that worked so hard to make this day possible.”

Commissioner been said the development will bring “parks, ball fields, a school, and a supermarket” to the neighborhood and added, “The environmental sustainability of Hallets Point is a model, and we look forward to continuing to work with the local community to ensure this development reaches its full potential.”

State-of-art green features will include onsite power generation and a waste water, or Black water, recycling system which will repurpose more than 130,000 gallons of water a day.

The project is a joint venture of The Durst Organization and Lincoln Equities Group LLC, who guided the project through its seven-year approval process.
The 2.5 million square foot project includes seven residential buildings including two buildings that will be 100% affordable. The affordable buildings are being developed in partnership with the Jonathan Rose Companies.

There will be over 100,000 s/f of public access space extending the Queens East River and North Shore Greenway Esplanade. It will also reopen a section of Astoria Boulevard with improved bus services.

An elevated shoreline will prevent erosion and help safeguard the peninsula from rising sea levels. The development will be built in compliance with the new FEMA and HUD flood plain codes and will be a model of resiliency and sustainably. All critical infrastructure will be located well above any area that could be threatened by flooding.

The cogeneration plant that will enable the development to generate its own electricity, hot water, heating, and cooling on-site, independent of the local electric grid. The micro-grid created at this project will make Halletts the only “off the grid” residential campuses in New York City.

A Blackwater reclamation system will recycle wastewater onsite which set a standard for water resource management.

Building 1 will process up to 50,000 gallons of water each day and buildings 2-5 are expected to process 85,000 gallons each. This system will prevent millions of gallons of waste water from being dumped into the East River and the reclaimed water will be used to flush toilets and to irrigate the campus.

A site has been reserved for the New York City School Construction Authority to build the first public school on Hallets Point.

In 2017, the East River Ferry System will be expanded to the Hallets Point peninsula. The service will run year-round and provide rapid transit to locations throughout Queens, Manhattan, Brooklyn, and the Bronx.