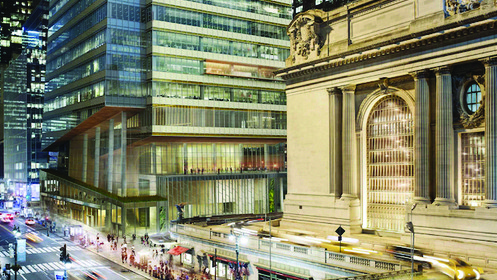 Grand Central owner goes off the rails on 1 Vanderbilt

The owner of Grand Central Terminal threatened to sue over One Vanderbilt last week, putting a damper on an otherwise encouraging City Planning hearing on SL Green’s planned office tower.

As the Commercial Observer reported, Grand Central’s owner, Argent Ventures, sent two lawyers to the hearing to object to current plans that would rezone seven blocks on Vanderbilt Avenue between 42nd and 47th Streets to enable construction of the 1,350 s/f tower.

The city’s rezoning proposal means the developer won’t have to buy air rights from the adjacent Grand Central Terminal.

The threat of a lawsuit overshadowed some encouraging feedback during the scoping session, which was attended by local business and advocacy groups.

The Municipal Arts Society said,  “317 Madison has proposed a number of worthy and necessary public improvements, including enhanced transit connections to the subways and Grand Central, new waiting areas, and a new public plaza along Vanderbilt Avenue.

“These are vital improvements and we applaud the developer, MTA and City for working to improve conditions for transit riders in the area.”

In a press statement GCP said that the project would help modernize the area’s ageing office space, adding that “the City and the region as a whole stand to gain from the substantial investments in the public transit network and public realm that will occur as a result of this action.”

“We look forward to continuing an open, receptive dialogue as we create a world-class office tower with $200 million in transit and public realm improvements.” деньги в долг