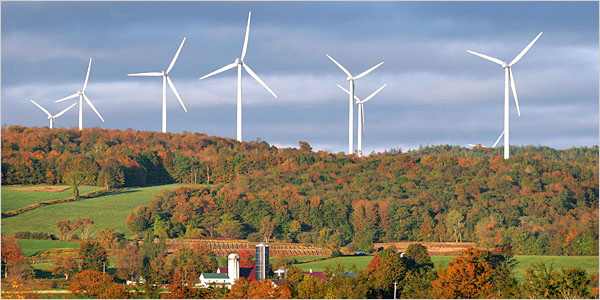 Governor Andrew M. Cuomo has unveiled new details of the state’s efforts to obtain 70 percent of the New York’s electricity from renewable sources by 2030.

The projects, which New York Energy Research and Development Authority and other State and local agencies will guide, are expected to spur over $2.5 billion in direct, private investments toward their development, construction and operation and create over 2,000 short-term and long-term jobs.

“New York continues to be a leader in developing large-scale renewable energy projects in a way that brings significant economic benefits and jobs to the state,” Governor Cuomo said.

“With these projects we will build on our aggressive strategy to combat climate change and lay a foundation for a more sustainable future for all New Yorkers.”

Expected to generate over 2.5 million megawatt-hours of renewable energy annually, the projects will provide enough to power over 350,000 homes and reduce carbon emissions by more than 1.3 million metric tons annually, equivalent to taking nearly 300,000 cars off the road every year.

The awards, totaling $1 billion in State investment, include projects that offered bids 23 percent lower than the bids received three years ago, highlighting the continuing cost declines of renewable energy.

The awards are the third in a series of annual NYSERDA land-based renewable procurements that are expected to result in the development of dozens of large-scale renewable energy projects over the coming decade.

For three consecutive years, NYSERDA has awarded over 67 projects which, combined with New York’s commitment to offshore wind announced earlier this year, will be capable of generating over 12 percent of the state’s expected electricity demand in 2030.

Alicia Barton, president and CEO, NYSERDA, said, “New York’s steady advancement of large-scale renewable energy projects is helping create a clean energy future faster and more affordable than ever anticipated. Building on our success over the past three years, these projects, once completed, will deliver a significant amount of clean, renewable energy to all New Yorkers while helping to grow the state’s green economy.

“With the impacts of climate change being felt in New York and around the world, moving rapidly to renewable forms of energy is imperative.”

NYSERDA payments under these awards will not commence until projects have obtained all required permits and local approvals, and begin commercial operation.

Two solar projects will include energy storage to enhance integration of renewable energy resources into the electric grid.

In February, Governor Cuomo proposed the Accelerated Renewable Energy Growth and Community Benefit Act (the Act) to speed up the permitting and construction of renewable energy projects to combat climate change and grow the state’s green economy.

Once sites are fully permitted and developed, NYSERDA will auction the developed sites, bundled with contracts for renewable energy payments, to provide a fully de-risked package for private developers to construct and operate projects at these sites.