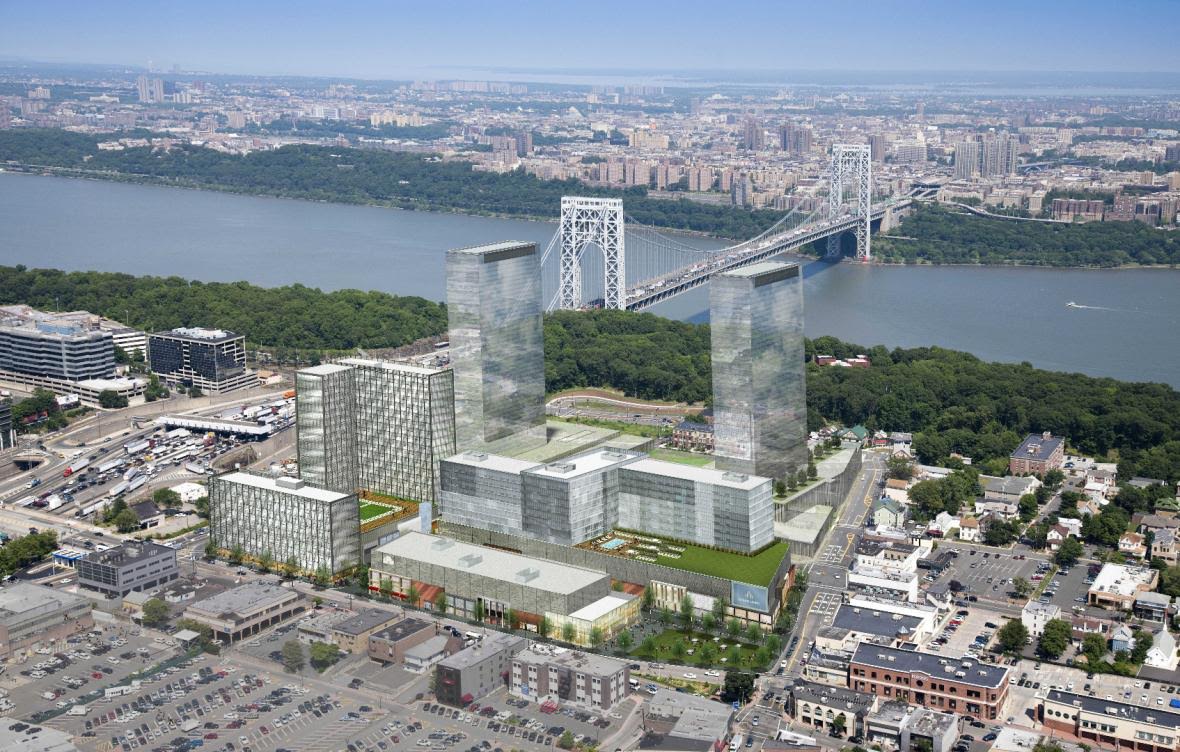 Fort Lee ready for the spotlight with Hudson Lights complex

The west side of the Hudson River has always had a unique relationship with the empire on the other bank.

New Jersey and its 6 million residents more than hold their own. It is both a hub of commerce and a desirable place to live. The state has its own professional sports teams, its own cultural icons, its own beaches, and its own highly touted restaurants.

Despite its own merits, there is no doubt that the state’s proximity to New York City has aided it in becoming such a draw to residents and commercial activity.

For Fort Lee, New Jersey, proximity to Manhattan has become its main calling card. It appears that that’s about to change.

The upcoming mixed­-use development called Hudson Lights will bring more than one million s/f of retail, residential, office and/or hotel space to the area later this year. The project is being developed by Tucker Development, a builder based in Illinois and the retail component is being handled by RKF.

Earlier this month, Tucker announced that the retail component of the first phase of Hudson Lights has signed long­-term tenant agreements with CycleBar, Linwood Wine & Liquor and SeeSaw. With these new tenants, the multi­-faceted property’s retail component is approximately 75 ­percent leased.

Taking up nearly half of a 15­-acre redevelopment effort, Hudson Lights is expected to generate a whole new level of demand for a town which serves as the conduit between the Garden State and NYC via the 14­-lane George Washington Bridge.

“I think it’s actually pivotal in the history of Fort Lee,” Nelson Chen of Chen Agency Realtors told Brokers Weekly while discussing the development. Chen specializes in properties in and around the Fort Lee area.

“We’re bringing back what we’ve actually been losing over the last 20 years,” he said. “We’ve been losing an identity of the town in terms of things to do locally. I think people think that we’re just a great location on the way to other places. Now there’s lots to do right here in town.”

Chen said that the area has been in need of more shopping options for locals and pointed to a lack of retail outside of major super markets.

The new shops will bring with them a vibe that the town of Fort Lee has clearly needed and from a financial standpoint, Chen has already seen a rise in demand for local residential and commercial properties.

“I always hesitate to speculate to the future,” said Chen, who is anxiously awaiting the completion of the project. “We can definitely report though that everything around the main street area has heightened demand.”

Chen is referring to the area closest to the George Washington Bridge, which is also being updated as part of a town-­wide movement to redefine the locality. The one­ million ­square-foot development’s first phase will comprise approximately 140,000 square feet of retail and 276 luxury apartments when the construction is completed.

Chen said that anticipation of the coming chances has led to a spike in interest in both residential homes within the town and in commercial property near the soon-to-debut, new downtown corridor.

“The Modern is getting rents that are far­, far higher than anything else we have in Fort Lee,” said Chen while discussing the residential building that is the sister­ property to Hudson Lights.

While Chen is cautiously optimistic about just how high he expects values to rise in Fort Lee, another local real estate expert has a precise projection.

“I expect prices to rise in Fort Lee by 30 percent over the next few years,” said Billy Procida, president of Procida Funding & Advisors in Englewood Cliffs, New Jersey.

“That’s not my opinion of other New York markets,” he added, suggesting that other localities in the area may be nearing their peak value, especially for residential properties. “Fort Lee has nowhere to go but up.”

During his 30­-year career, Procida has completed several billion dollars in projects as financier, real estate developer, builder and restructuring advisor. He spent much of that time working out of Fort Lee and he sees it as a town that is on the brink of a much-needed resurgence.

Procida said that over time, celebrities began to frequent the area less and less and the town’s positioning as a suburb of New York began to lose some of its luster.

Upon moving to the area himself many years ago, Procida said that there were no stores available in which to buy sundries for his apartment. At the time, it was hard to envision residential demand beginning to thrive in the area.

“Now comes the Modern and Hudson Lights,” he said while discussing the sister properties. “When you have $2 billion spent in one concentrated spot, of course it’s going to transform (the area).”

CycleBar, one of the newest retail tenants to join the project, is a new concept in indoor cycling, offering high­-energy workouts paired with an unparalleled music selection and interactive entertainment features. Founded in 2004, CycleBar’s unique exercise concept has earned great popularity, and the company expects to be operating 100 studios by the end of 2016.

Linwood Wine & Liquor Co. is a premier wine and spirit shop that carries a diverse array of wines, beer, sake and other alcoholic beverages. Founded in 1979, the store has earned high regard for its comprehensive selection of fine whiskeys and micro beers from around the world.

SeeSaw is a high­-end fashion store, home to the latest brands of women’s apparel and accessories. CycleBar, Linwood Wine & Liquor, and SeeSaw are the latest in a diverse array of amenities at Hudson Lights, which are designed to reinvigorate Fort Lee’s downtown while providing the city and its residents with a wide range of dining, shopping and entertainment options. The development’s lead tenant is movie theater iPic, which is building an eight­screen, 533-­seat luxury movie theater. Other tenants include CVS, Capital One Bank, a variety of dining options as well as apparel, banking, real estate and service establishments.

The fully entitled second phase of Hudson Lights is approved to include an additional 201 residential units, approximately 50,000 square feet of retail space and parking, as well as a 175­-room hotel. The zoning also affords the development the option for an office building of up to 430,000 s/f.

If the finished product lives up to expectations, New Yorkers may be taking to the George Washington Bridge to visit Fort Lee, instead of the other way around.