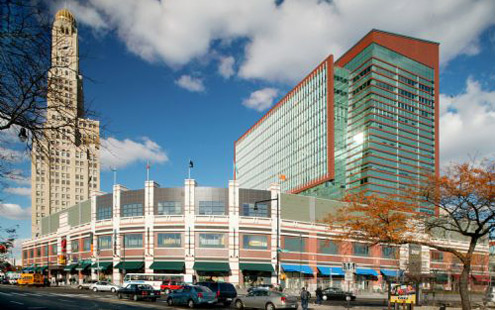 Forest City Realty is exploring “strategic alternatives” that may lead to the conversion of its retail portfolio into residential and office properties. The company, the owner of retail outlets such as Atlantic Terminal Mall in Brooklyn and Harlem Center in Manhattan, is developing an exit strategy as malls continue to lose its appeal with shoppers.

“Over the past five years, we have made tremendous progress transforming Forest City by focusing on core urban markets and products, reducing complexity, paying down debt, driving operational excellence and converting to REIT status,” said David LaRue, the company’s president and chief executive officer.

“As part of this ongoing transformation, and after careful consideration, we have made the decision to explore strategic alternatives for our retail portfolio… Assuming we identify and transact on a chosen alternative, or alternatives, our intent would be to redeploy the value from our retail portfolio into apartment and office assets that align with our focus on core markets and urban, mixed-use placemaking projects.”

The move comes as major retailers continue to announce store closures. In an interview with Time Magazine earlier this year, retail analyst Jan Kniffen predicted that one-third of American malls will close over the next few years. Not even the largest retailers are exempt from the retail squeeze. Earlier this month, Macy’s announced plans to close 100 locations as e-commerce competitors continue to cut into its profits.

Forest City has $8.9 billion in assets. According to the company’s second quarter financial report, occupancy in its retail portfolio was up slightly year-over-year from 94.1 percent to 94.3 percent. However, sales in its regional malls dropped from $555 per s/f to $554 per s/f.