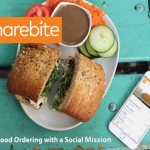 For each new customer that places an order on the Sharebite mobile app, choosing from any of the 1,000+ Manhattan restaurants on the platform, Sharebite will help feed 10 children facing hunger through City Harvest – where it costs 26 cents to rescue and deliver a pound of food to help feed one person for a day.

As a partner on the Take-Out Hunger campaign, TF Cornerstone will match up to 10,000 meals ordered by customers to help users of the app make an even bigger social impact – at no additional cost.
“We are proud to work with Sharebite’s innovative team to fight against childhood hunger in our community,” said Sofia Estevez, executive vice president at TF Cornerstone. “The fact that one in four children face hunger in our city is astonishing. Sharebite’s simple approach provides an easy way for New Yorkers to change this statistic and give back this holiday season.”

“If every New Yorker ordered takeout using Sharebite, the city could put an end to childhood hunger,” said Mohsin Memon, Founder and CEO of Sharebite.
Sharebite also regularly donates two percent of each user’s transactions to a charity of their choice, enabling users to support a cause they are passionate about, just by ordering dinner.
Sharebite is available for iOS and Android users.