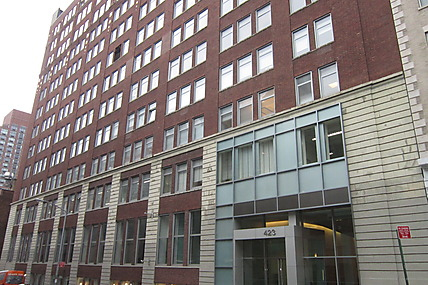 Fashion company Carlisle Etcetera has renewed the lease for its headquarters in the Winter Organization’s 423 West 55th Street.

The lease for office space on the third and fifth floors is for ten years, while retail space on the ground floor will be leased for five years.

David Rosenbloom, Richard Nocom and Emily Weber of Cushman & Wakefield represented the tenant. The Winter Organization was represented in-house by Robert Fink. The 12-story, 320,000-s/f building was gut-renovated ten years ago. Other tenants include The Related Companies, Viacom, Sonar Entertainment and Planet Fitness.

“To be near midtown at rents under $40 is truly enticing for certain companies,” said Robert Fink, the director of leasing for The Winter Organization who was just named Young Real Estate Executive of the Year at the annual REBNY Banquet.

“This northern fringe of Hells Kitchen is burgeoning. There is plenty of residential growth and the amenities that follow, as well as proximity to the Time Warner Center and the transportation hub of Columbus Circle. With Hudson Yards now all over the news, midtown will be stretched even further west.”

“We did an exhaustive search around Manhattan, and came to the conclusion that the value and layout worked best for them,ˮ said David Rosenbloom. He added that Carlisle plans to renovate one of its floors, which it uses for production.

Founded in 1981, Carlisle Etcetera specializes in high-end women’s fashion. The company was bought by the Tom James Company and Royal Spirit Limited in 2012, according to its website.