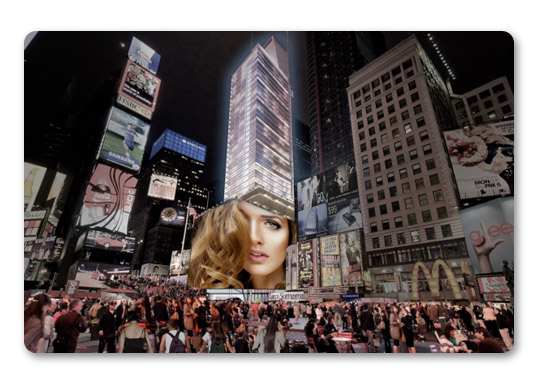 It’s all coming together at 701 Seventh Avenue.

Last week, the joint venture developing the 39-story tower at the northern end of Times Square announced that the hotel portion of the building will be operated by Marriott Hotel’s new Edition brand, which Marriot developed in collaboration with the hotelier Ian Schrager. It will be New York’s second Edition, with the first, in the landmarked clock tower building overlooking Madison Square Park at 5 Madison Ave, scheduled to open in 2015.

Also last week, the Steve Witkoff-lead venture announced that it was refinancing its initial stake and also secured additional financing and supplemental loans to the tune of $815 million. Carlton Group’s Howard L. Michaels arranged the loan.

But one detail is still missing from the picture of the billion-dollar development taking shape on the corner of Seventh Avenue at 47th Street: A retailer to stake a claim to the shiny new storefront and prominent signage at the base of the tower.

But that question mark may not hover for long.

“Time Square retail is just on fire — really on fire,” said Faith Hope Consolo, chairman of Douglas Elliman’s retail group, who added that the 701 Seventh space is sure to start a bidding war among retailers.

The CBRE team of Stephen Siegel, Susan Kurland and Andrew Goldberg is marketing the 82,000 s/f of retail space, as well as a massive, 20,000 s/f wrap-around LED billboard.

Judging from the graphics on the marketing brochure for the site, the Japanese affordable fashion retailer Uniqlo is considered a contender. Other fashion retailers in that price range have established strong brand presences in Times Square in recent years, including H&M’s four giant signs on the top of 4 Times Square.

But the prime branding opportunity could also appeal to electronics retailers and internet brands. Conosolo mentioned Apple and Microsoft. Speaking about the deal back in 2012, Witkoff threw around the names Google, Amazon and Samsung.

The 82,000 s/f is spread over four above-ground floors and two mezzanine levels. The building also commands 250 feet of frontage on Times Square.

The retail space has always been at the heart of the plans for the tower. It was the first part to be funded, when Steven Witkoff and Barry Sternlicht purchased the site in 2012 from Maefield Development and Infinity Urban Century for $430 million. Maefield and Infinity had assembled the site, including securing air rights and purchase agreements for the underlying land, and buying out old tenants. They both stayed on as partners in the development, but Maefield has since bought out Infinity’s stake, according to a report in the New York Post. , Winthrop Realty Trust and New Valley, an investment unit of Vector Group, are also partners in the venture.

Average ground-floor asking rent in the Times Square submarket was $2,230 at the end of the third quarter last year, according to Cushman & Wakefield, an increase of 10 percent over the previous year. But rent for this location is unlikely to be average.

“Records are being set every day,” Consolo said. “We’re setting records in SoHo, records on Madison, records on Fifth. Why not have a record in Times Square?”