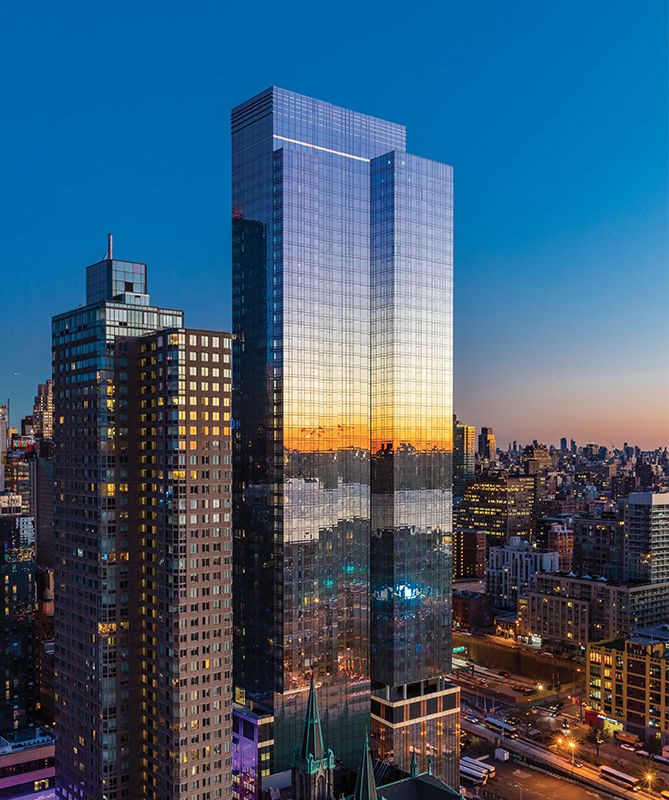 Since the beginning of this year, eight tenants have been shown the door at 555 Tenth (pictured top), a 56-story rental where median rents are $3,390 a month.

Around the corner at 605 42nd Street, where median rents are the same, the Moinian Group has evicted five tenants from the skyscraper so far in 2019.

The numbers surfaced in a survey of New York City evictions by web platform, RentHop which found that, overall, evictions are down 9.6 percent in the Big Apple from the same time last year.

In 2018, there were roughly 21,000 evictions in the city, a number RentHop concluded “would be unfair to characterize as a problem affecting a large portion of the population.” RentHop’s Adrian McHale explained, “In a city of eight to ten million people, 21,000 evictions seems like a fairly small number. We don’t want to downplay the plight of those 21,000, but when painting with a broad brushstroke, we feel it’s a fairly small subset of the population.”

The study found no correlation between median rents and the number of evictions, and while reasons for evictions aren’t publicly available, they are typically for nonpayment of rent.

RentHop also found where there was a concentration evictions, the addresses turned up an ad for an Airbnb.

“It may be that people in Manhattan are Airbnb-ing their apartments and getting evicted,” said McHale, though he clarified this as a theory and not data-driven.

Indeed, in a statement, the Moinian group said, “The Moinian Group is committed to ensuring the best and safest possible experience for its building residents, which includes monitoring regularly for instances where tenants are going against building policy and listing units on Airbnb. Each of the evictions mentioned on Renthop were Airbnb-related.”

McHale attributed the eviction numbers to market forces. “If rent prices are lower than they’ve been, or not rising to degrees they have in the past, that would also have an effect on evictions,” he said. But he added, “This is only the first quarter (of the year), so who knows what will happen during the busy season, which is the beginning of the summer to early winter. But I do imagine this drop is something that will persist through the year.”

McHale added, “The point we’re trying to make is that evictions are fairly uncommon. In 2019, in the West Village, there was only one eviction. It’s possible there are landlords who are bad actors, but it’s somewhat difficult (to track that as opposed to problems) with heat and hot water.”

Manhattan evictions fell from 518 to 486 while Queens dropped from 733 to 716. The fewest evictions were in Staten Island, where numbers fell from 127 to 97.