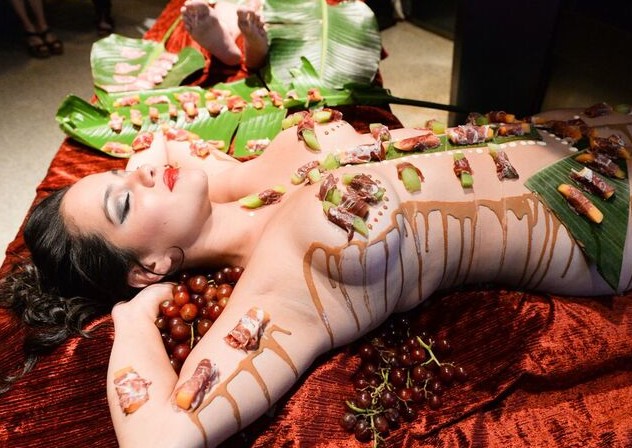 Anita Durst is getting ready to host her annual fundraising extravaganza, the chashama Gala.

The event has become a spectacle of the New York real estate calendar as much for its outrageous art – think naked bodies slathered in hors d’oeuvres (pictured top) and Bjork-like frocks – as its divergence.

Chashama attracts a real estate crowd that doesn’t even dress down on casual Fridays. Come chashama night, they’re out there in their rebel t-shirts and candy-cane striped ties shaking hands with folk called Flambeaux and walking through the Temple for Truth Telling.

The temple is, in fact, a real thing. Artist Toni Kochensparger has created the interactive art installation especially for the 2018 Gala. He calls it “a quiet space in the middle of the gala to exorcise guilt, anger, secrets, etc.”

If that’s not temptation enough for real estate’s premier pay grades, check out this brief menu of treats:

“This isn’t your grandmother’s charity fundraiser,” says Durst, founder and artistic director of chashama, a Persian word meaning to have vision. “No speeches, no formal sit-down dinner; just merrymaking, amusement and play.”

Before you have a heart attack, remember it’s a fundraiser for a very good cause. Durst founded chashama well before the real estate crowd clocked onto the power of art to say, spruce up an office lobby, sell an empty retail space, draw a crowd to a launch …

The daughter of one of the city’s most powerful real estate players formed the organization herself in 1995 in response to the lack of affordable space for emerging artists in New York City. Since then, the non-profit has provided space to create and present for 15,000 artists. Chashama partners with property owners to re-purpose dozens of unused spaces in communities across the city, upstate, and in Connecticut and New Jersey.

The Gala take place across the entire 22nd floor of 4 Times Square on June 7, from 6 pm to 12 am.  For more information or tickets, go www.chashama.org – we dare you.