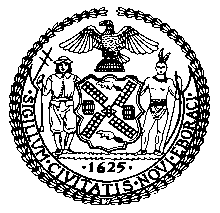 Developers set to contribute to city-funded housing for homeless

The New York City Council on Thursday will vote on legislation that will require developers of large housing projects receiving financial assistance from the City to allocate 15 percent of the units for individuals and families experiencing homelessness. As New York City continues to face a homelessness crisis, this legislation is designed to move more New Yorkers into stable and permanent housing.

This legislation will apply to new rental buildings that have more than 40 units, and will make New York City the first large city in the country to require developers to set aside housing for individuals and families experiencing homelessness. This bill would go into effect in July 2020.

The council will also vote on legislation designed to better regulate indoor air temperatures in buildings that have not complied with legal heat requirements. Owners of those buildings would be required to install devices that can monitor and report internal temperatures in specific dwelling units.

This device will report data on temperatures that individual tenants can use on and offline. The New York City Housing Maintenance Code requires building owners to maintain certain temperatures in each unit during heat season. However, tenants and owners may not always be aware if the building is being adequately heated. The New York City Department of Housing Preservation and Development would be required to select 50 rental buildings based on factors indicating heat issues to install the device and for heat inspections. The buildings would be chosen on factors such as a high number of heat violations or complaints and other potential indicators that a building owner has failed to comply with the heating requirements set forth in the Housing Maintenance Code.

Additionally, the Council will be voting on legislation that will amend current local law that currently only collects information on injuries sustained by municipal employees in the course of duty in order to include occupational diseases.

Proposed Int. No. 1211, sponsored by Council Member Rafael Salamanca Jr., would require developers who receive City financial assistance for new construction of housing development projects to set aside at least 15 percent of dwelling units offered for rent in each housing development project for homeless individuals and families. The Department of Housing and Preservation would be required to annually report to the Mayor and the Speaker the number of units set aside for homeless individuals and families for each housing development project and housing preservation project that received City financial assistance, as well as whether the project is a supportive housing project. This bill would take effect on July 1, 2020.

“Today, the City Council is voting on legislation that will tackle both the housing and homelessness crisis. Despite well-intentioned policies, the number of people living in shelters has reached record high numbers. Introduction 1211, which would require residential developments receiving city subsidies to set aside 15% of units for the homeless, gives us a path forward to creating what advocates and shelter residents have been calling on for years – thousands of units of new, permanent housing for the city’s most vulnerable. Legislating an increased set aside ensures that future councils and administrations will continue to do their part in addressing a crisis that one day we will eradicate. I thank Speaker Corey Johnson for leadership and support on this issue, my colleagues who showed overwhelming support for the legislation, and most importantly, the advocates from the House Our Future NY campaign for their dedication to ensuring every New Yorker has access to permanent housing,” said Council Member Rafael Salamanca Jr.

Proposed Introduction No. 1710-A, sponsored by Council Member Donovan J. Richards, would extend the J-51 tax exemption and abatement program through June 30, 2020. The J-51 program is administered by the Department of Housing Preservation and Development and provides tax exemption or abatement for major capital improvements on certain buildings. This bill would also raise the assessed value limitation on the units eligible for this program from $35,000 to $40,000.

“As we continue to wait for reforms to our property tax system, the renewal of the J-51 tax incentives for owners of converted or renovated co-ops and condos in the outer boroughs will allow thousands of homeowners to improve living conditions and still maintain some of the most reasonably priced homes in the entire city. There are so few opportunities for home ownership in our city, which is why it is critical that we provide as much incentives as possible to ensure that there is still an affordable path to ownership for our families in Queens, Brooklyn, the Bronx and Staten Island. I’d like to thank Speaker Johnson for keeping this program active across New York City,” said Council Member Donovan J. Richards.

Proposed Introduction No. 948-A, sponsored by Council Member Ritchie J. Torres, would require HPD to select a list of 50 buildings based on such factors as the highest number of heat violations, the highest number of heat complaints, and other factors that indicate the building owner has failed to comply with the heating requirements set forth in the Housing Maintenance Code. This bill would require owners of buildings on this list to install an internet capable temperature reporting device in each dwelling unit for up to four years.

The device must be capable of measuring the indoor air temperature at least once per hour and then reporting that information to a server from which the data can be viewed, through the internet or other means when no such connection is available, by both the building owner and the tenant. This bill would also require HPD to conduct targeted inspections of buildings on that list every two weeks for the duration of the heat season.