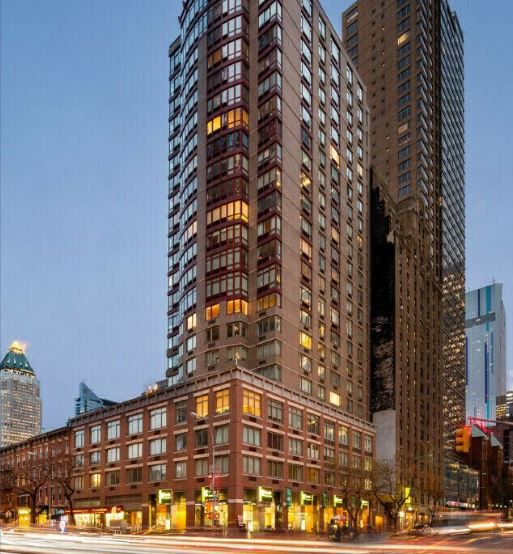 Brodsky suspends workers who stood by as Asian woman was attacked

The Brodsky Organization has suspended the doormen who stood by and watched as an Asian woman was brutally assaulted outside one of their midtown towers on Monday.

The company said in a statement posted to its Instagram account, “The Brodsky Organization condemns all forms of discrimination, racism, xenophobia and violence against the Asian American community.

“The staff who witnessed the attached have been suspended pending an investigation in conjunction with their union.”

Video footage shows the 65-year-old woman being attacked outside the apartment building at 360 West 43rd Street (pictured top) by a man who pushed her to the ground and then repeatedly stomped on her head as she lay there.

A group of building workers in the building’s foyer can bee seen in the video watching the assault and then closing the door and doing nothing to help the woman.

Their union boss said the matter is now being investigated.

“The attack at 360 West 43rd Street is appalling and is yet another example of the unbridled hate and terror against our AAPI neighbors. We are disgusted and outraged by the attack and stand with our AAPI members who have increasingly faced this kind of hatred in their daily lives.

According to Bragg, the door staff, members of SEIU 32BJ, called for help immediately, but have been suspended pending further investigation.

“Our union is working to get further details for a more complete account, and urge the public to avoid a rush to judgment while the facts are determined,” said the union leader.

“We stand with our AAPI members and their families and communities. For four years, anti-AAPI hatred was stoked at the highest levels of government and has sparked sickening hate crimes in Atlanta, NYC and nearly every city in America. We must root out this hatred in all its forms before more senseless attacks occur. The perpetrators of these crimes, including the attack last night, must be held fully accountable under all federal and state civil rights and hate crime laws.”

Police have appealed for help identifying the man who assaulted the victim, who was on her way to church at around 11:40 a.m. on Monday when her assailant yelled, “F–k you, you don’t belong here,” as he beat her, according to police.

The assault comes as the city grapples with a stunning increase in hate crimes against the Asian community.

Just last week, Police Commissioner Dermot Shea announced it was beefing up its task force to include plainclothes officers being deployed in teams “to prevent New Yorkers from becoming victims in the first place.”

“I’ll say this so the message is very clear to everyone: the next person you target whether it’s through speech, menacing activity, or anything else, walking along a sidewalk or a train platform, may be a plainclothes New York City police officer so think twice,” Shea said.

The department is also adding two detectives to its hate crimes task force.

The NYPD is actively investigating or has solved 12 anti-Asian bias assaults so far this year.

A study recently released by the Center for the Study of Hate and Extremism at California State University, San Bernardino, revealed that hate crimes overall decreased last year, but those targeting Asian people rose by nearly 150 percent.

The study showed a surge in cities such as New York, where anti-Asian hate crimes rose from three in 2019 to 28 in 2020, a 833 percent increase. The spike occurred alongside a rise in Covid-19 cases and ongoing negative associations of Asian Americans with the virus, the analysis noted.

The Brodsky Organization is one of the city’s most accomplished owners and developers. It has developed over 9,500 apartments in the city in more than 85 rental, condominium and co-op buildings.