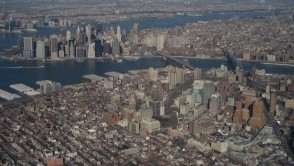 Mayor Bill de Blasio today announced a package of investments in Downtown Brooklyn that will ensure the district continues to grow.

Ten years after the area’s major rezoning, the administration is seeking to knit together Downtown Brooklyn’s parks, commercial strips and institutions.

Included in the package are redesigned streets, opening the ground floors of City-owned buildings to retail development, opening new parks and improving existing ones, and collaborating with the area’s 11 major education institutions to position Downtown Brooklyn as a national leader in technology.

“This is one of the city’s great success stories, and we have an incredible opportunity to take these stunning communities, parks and institutions and knit them together. The investments we are making will help Downtown Brooklyn continue its rise, generate good jobs, and make this a more dynamic neighborhood to live and work,” said Mayor Bill de Blasio.

“Today we proudly announce a new wave of development meant to stimulate the growth of the Downtown Brooklyn commercial district. At the center of the revitalization is the restructuring of the ‘Brooklyn Strand’—the parks, plazas and greenways between Borough Hall and Brooklyn Bridge Park. Furthermore, the city will soon unveil the long-awaited Brooklyn Cultural District BID, and will increase collaboration among Downtown Brooklyn’s higher education institutions to strengthen our creative and technological footprint. As we continue to develop Downtown Brooklyn, we remain committed to facilitating the creation of affordable housing, and ensuring that community voices remain heard throughout this process,” said Public Advocate Letitia James.

“Downtown Brooklyn has become a destination in every sense of the word, a place that people near and far seek out to live, work and play. This transformation was made possible by the investment our City has put into this neighborhood, and once again they are stepping up to the plate, this time under the sound leadership of Mayor Bill de Blasio. I am excited to see Downtown Brooklyn’s full potential unlocked under this exciting plan, including its unique open space, which will soon connect Brooklyn Borough Hall to our one-of-a-kind waterfront, its outstanding arts community and its innovative institutions of higher education,” said Brooklyn Borough President Eric Adams.

“Through smart land use policy and targeted public investment the City of New York has helped to attract over $4 billion dollars of private investment to Downtown Brooklyn over the last decade, leading to the creation of 8 million square feet of new space including 5,000 new apartments, over 1,000 hotel rooms, and nearly 900,000 square feet of commercial space in our community,” said Tucker Reed, President of the Downtown Brooklyn Partnership. “Today’s announcement reflects Mayor de Blasio’s commitment to ensuring that this growth is not a flash in the pan, but a continued and sustained trend that jobs and housing for New Yorkers will continue to grow in Downtown Brooklyn.”

Among the initiatives underway in Downtown Brooklyn are:

Reinventing the “Brooklyn Strand”—The key to connecting Downtown Brooklyn to its waterfront is the redevelopment of the 21-acre Brooklyn Strand. The series of disconnected parks, plazas and greenways between Borough Hall and Brooklyn Bridge Park have enormous potential to become the great promenade and gateway to Brooklyn. The City and Downtown Brooklyn Partnership are developing plans for new connections and improvements that will reinvent this linear park to make it one of the borough’s great destinations and help make Brooklyn Bridge Park truly accessible by creating a seamless connection to major transit hubs in Downtown Brooklyn.

Leveraging City-owned buildings to spur more commercial activity—The City owns 1.4 million square feet of commercial space in Downtown Brooklyn, and is moving to redevelop ground-floors of its buildings for new retail tenants. The City is studying sites like 65 Court Street to determine what space can be consolidated or repurposed for commercial construction and affordable office space for job creating-firms in Brooklyn.

Making streets safer and more inviting—The City is working with local stakeholders on a new urban design strategy that overhauls the area’s most dangerous and uninviting streets.

·         Jay Street: The City and Downtown Brooklyn Partnership are undertaking a planning process with local stakeholders to redevelop this vital north-south corridor as a more pedestrian- and bicycle-friendly street with new commercial development on underutilized stretches.

·         Tillary and Adams Streets: This gateway to Brooklyn is currently being redesigned by DOT and DDC as part of a capital reconstruction project. Construction is expected to begin in 2015 with a multi-million dollar budget, encompassing all of Tillary Street and portions of Adams Street. These improvements include relocating and rebuilding medians, installing and widening planted medians, sidewalk widening and new curb extensions. This will vastly improve the bicycle/pedestrian access point to the Brooklyn Bridge and will give this area the gateway it deserves.

·         Willoughby Street: DOT has initiated a planning and conceptual design effort focused on creating an improved streetscape and public realm on Willoughby and Pearl Streets. The project will explore non-traditional roadway design that recognizes and accommodates the heavy use of the area by pedestrians and the local nature of vehicular traffic, which includes deliveries and passenger drop-offs. Assisting with this effort will be a consultant team led by Arup, an international engineering and design firm with experience designing shared street space right here in New York City.

Creating new parks and public spaces—The City is investing in three new and revitalized public spaces that will be new focal points for the community.

·         Fox Square: This summer, construction will be begin at Fox Square to revitalize the nexus of Flatbush Avenue and Fulton Street with new paving, landscaping, street furniture, lighting, and electrical infrastructure. The $1.4 million project will be completed in early 2015.

·         Willoughby Square: The City is moving forward to build a brand new 1-acre public space in the heart of Downtown Brooklyn. Work began in earnest in recent weeks with the environmental remediation of buildings on the site now underway. In the coming year the existing buildings will be demolished, and the overall project is anticipated to be completed by the end of 2016.

·         BAM Park: Closed for decades, BAM Park is about to get a major facelift and reopen to the public. HPD, EDC and the Parks Department are collaborating on the project.  Downtown Brooklyn Partnership is working with the State to secure funding and has procured WXY to design a new public space worthy of the new Brooklyn Cultural District.

Launching a college consortium—Downtown Brooklyn’s 11 colleges are increasingly working together to capitalize on the area’s growing opportunities. The City is collaborating with the area’s educational institutions to develop a college consortium that will better connect the tech, creative, and academic communities, preparing local students and local residents for good jobs in the Brooklyn Tech Triangle. The City is catalyzing the effort with $200,000 in seed funding through its Economic Development Corporation.