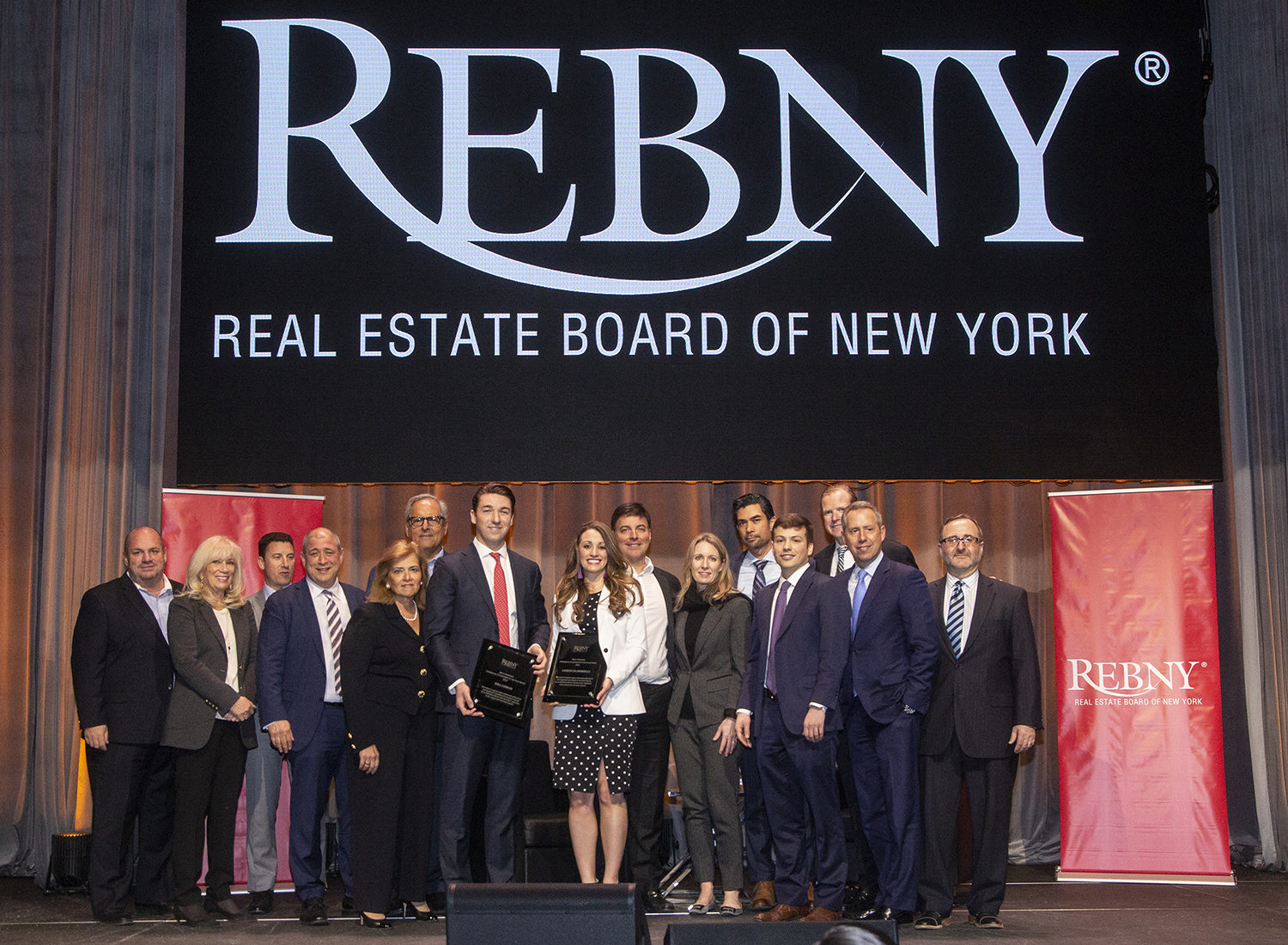 Commercial real estate brokers Lauren Calandriello of JRT Realty Group Inc. and Will Conrad of Cushman & Wakefield have each been named a 2018 Most Promising Commercial Salesperson of the Year by the Real Estate Board of New York (REBNY) and its Commercial Brokerage Board of Directors.

The two stand-out professionals were honored at the REBNY’s Spring Members’ Luncheon, which featured a conversation with REBNY President John H. Banks and Google’s Director of Real Estate Paul Darrah on why Google is staying in NYC, and how the tech company’s continued expansion across the five boroughs contributes to our growing economy.

As winners of this coveted award, Lauren Calandriello and Will Conrad will both be granted a one-year term on REBNY’s Commercial Brokerage Board of Directors and a one-year seat on REBNY’s Board of Governors.

The runners up for the 2018 Most Promising Commercial Salesperson of the Year Award were: Alice Fair of CBRE, Inc., Sam Einhorn of Colliers International, and Matthew L. Gillis of Ariel Property Advisors.

The Most Promising Commercial Salesperson of the Year Award recognizes current and potential achievement as well as high moral character and ethical, professional behavior. Candidates for the award must be current REBNY members with less than five years of industry experience, display leadership and teamwork qualities, have made significant contributions to their firm’s success, and play an active role in the New York City community.

“We congratulate Lauren and Will on this great achievement, and applaud all of the finalists for this important recognition in our industry,” said John H. Banks, President of REBNY.

“Lauren has grown as a salesperson immensely over the last four years. She has become an integral part of several agency teams gaining the trust of those she works with at JRT and the client representatives,” said Jodi Pulice, Founder and Chief Executive Officer of JRT Realty Group, Inc., of award recipient Lauren Calandriello.

“Among many accolades, Will’s strength lies in his desire to help others; be it clients, team members or the community at large. Observing how he approaches every challenge and opportunity is a lesson in true commitment, dedication, and relentless hard work,” said John Santora, Vice Chairman and President of the Tri-State Region for Cushman & Wakefield, of award recipient Will Conrad.

ABOUT THE AWARD WINNERS

Lauren Calandriello joined JRT Realty Group, Inc. (JRT) in 2014 and has since been involved in a broad range of real estate transactions for a diverse client base. She is responsible for tenant representation, market research, lease review and negotiations, due diligence, site selection and transaction support. Lauren is currently active on the Department of Citywide Agency Services (DCAS) portfolio-wide services assignment, where she is assisting with advisory services for more than 10 million square feet of renewals, relocations, consolidations, and sale dispositions throughout Manhattan and New York City’s outer boroughs including Queens, Brooklyn, and the Bronx. She also works on multiple Landlord Agency assignments throughout Manhattan, Queens and the Bronx. Lauren is an active member of YM/WREA (Young Mens/Womens Real Estate Association) and Cushman & Wakefield’s Women’s Integrated Network. She is a 2017 recipient of Commercial Observer’s “30 Under 30” and a winner of the Queen’s Power Women in Business Award in 2016. Prior to JRT, Lauren specialized in recruiting and sales at Diversant. She is a graduate of Rutgers University and a volunteer with the Pets Are Wonderful Support (PAWS NY) Housecall Program.

Will Conrad focuses on Middle Market Investment Sales in the Midtown and Upper East Side neighborhoods of Manhattan as a member of Cushman & Wakefield’s Capital Markets division. Will’s expertise spans all asset classes, including multi-family, mixed-use, office, retail, and development sites. Prior to Cushman & Wakefield, Will began his career working alongside his father in the family’s student housing business in the Midwest. Will is a co-chair of REBNY’s Access Committee and is an Outreach Committee Member for the Urban Land Institute. He is a graduate of Miami University’s Richard T. Farmer School of Business and is an active volunteer with UNICEF, St. Jude Children’s Research Hospital, and Xavier Mission.