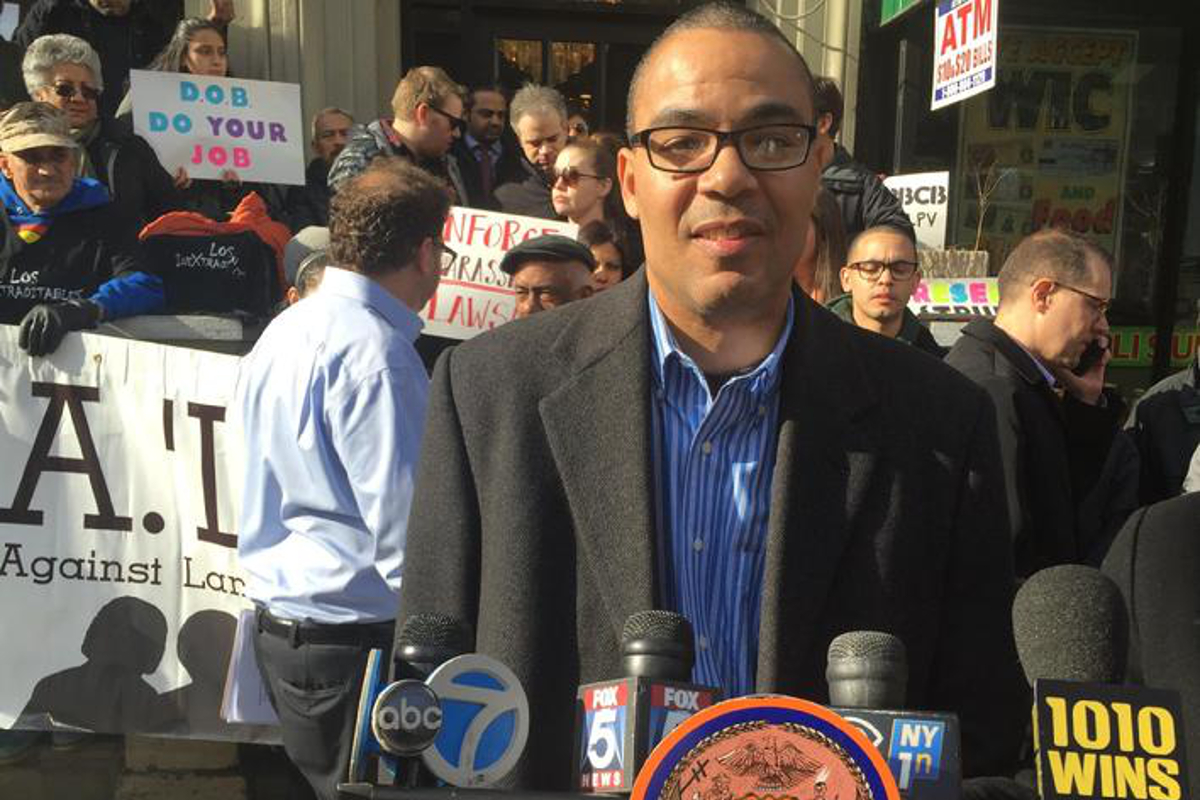 Thomas Lopez-Pierre, a City Council candidate who once sent racist emails in which he called a political fund-raiser an “Uncle Tom N-r,” made an incendiary appearance at a real estate event at Club 101 on Thursday morning.

Lopez-Pierre, who is running for the seventh district (Upper West Side, Washington Heights and Harlem) seat of Council Member Mark Levine, targeted Larry Casey, an executive from construction and development firm Skanska USA, which was levied a $20 million fine in 2011 for using a fake minority-owned company to win government contracts.

Taking the microphone during the Q&A portion of a panel discussion on social public private partnerships, Lopez-Pierre said: “Your firm was fined about $20 million for defrauding the taxpayers in terms of minority and women participation. The P3 space is something that I find very interesting. But could you talk a little bit about how we could build local support without having firms like yours defraud the taxpayers.”

This set off a tense exchange between Lopez-Pierre and moderator Michael Zetlin, a founding partner at law firm Zetlin & De Chiara.

Lopez-Pierre then softened his line of questioning, saying: Not personal. Wait a second. This is an important question. The Port Authority has a major deal. He didn’t personally do it. And all I want to know is: what has your firm done to correct this so it doesn’t happen again?”

“I appreciate the question. The purpose of this is not directed to any one individual or any one firm. We’re talking about a topic and I prefer to keep questions focused on social p3s,” Zetlin replied.

Lopez-Pierre said that he was surprised about the response to his question. “I was shocked, to be honest with you,” he said. “If it had been a community board meeting, I would have responded in a different way and kept the mic and not given it back until I got an answer. But I was just in a professional environment that for them to act in such an undemocratic and one-sided way was very surprising for me.”

Lopez-Pierre, who is a real estate broker, has been making a habit out of making tense appearances. During a recent book signing event for Harvard sociologist Matthew Desmond’s new book ‘Evicted,’ he confronted Levine for taking “dirty money” from REBNY and other real estate donors.

During his City Council campaign in 2013, he was criticized for making racially-charged comments.  He gained notoriety for sending an expletive-filled email to a Democratic fund-raiser supporting Levine. He has since doubled down on his comments, saying that he intends to use “more polite words to describe Uncle Tom black n-rs in my community.” “Because I’m going to be an elected official, I’m going to be polite in public. But in private, that’s how I feel about him,” he said.

He also attacked Levine for being a “white/Jewish guy” running in a district that’s predominantly black and Latino. He similarly reiterated his criticism of his rival. “Councilman Levine is a product of the Real Estate Board of New York. They own him,” he said.