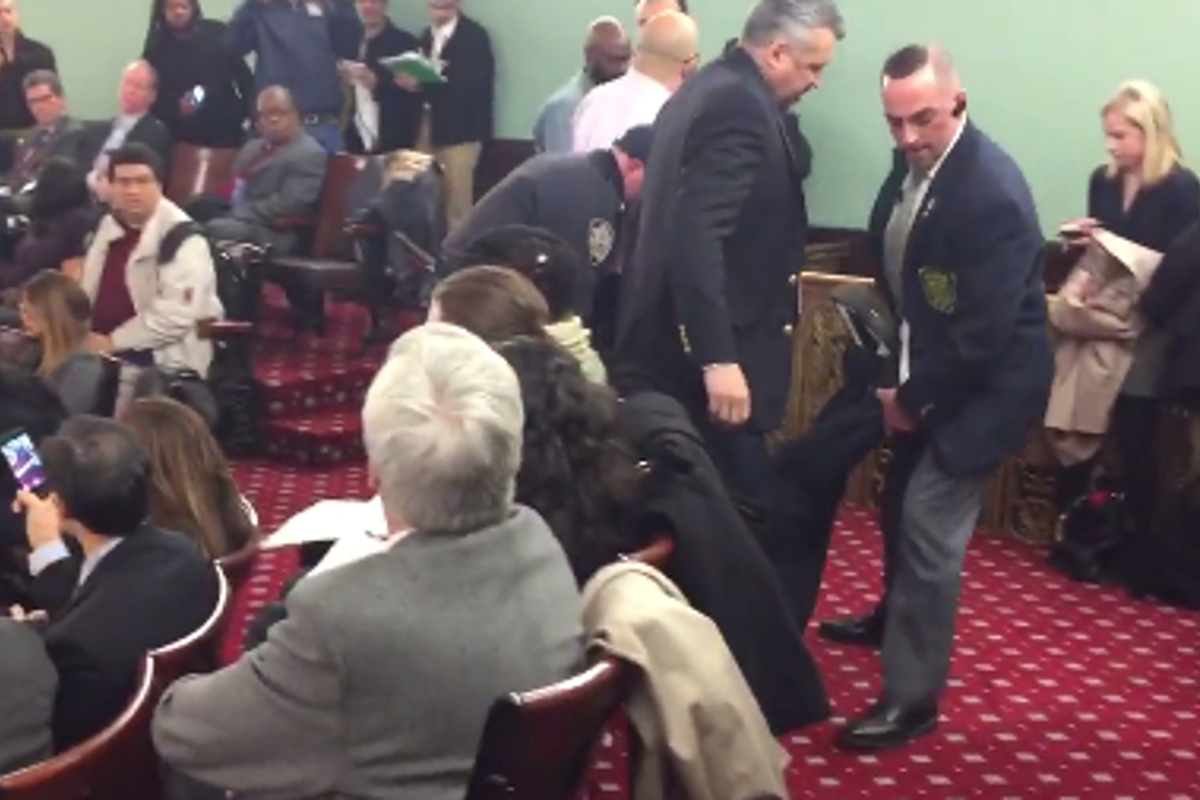 The New York City Council approved two controversial zoning proposals this afternoon as opponents were dragged yelling from the chambers.

Following months of revisions, the two biggest components of Mayor de Blasio’s affordable housing initiative, Zoning for Quality and Affordability (ZQA) and Mandatory Inclusionary Housing (MIH) were both passed in a lopsided vote at city hall .

The Council’s subcommittee on Zoning and Franchises had approved the zoning proposals in a vote last week.

ZQA allows buildings that contain affordable and senior housing units to grow taller. The plan essentially raised the height limits in certain neighborhoods by five to 15 feet, in hopes that developers would be motivated to create more affordable units.

The rezoning plans have been met with controversy and undergone several changes since they were first proposed last fall.

Council member Jumaane Williams, who represents the 45th District in Brooklyn, which includes Flatbush and Canarsie, had a split vote – voting yes on ZQA and no on MIH.

“There is no perfect plan,” he said during the vote, “but I think ZQA meets their (community boards) needs.”

David Greenfield, council member and chair of the Committee on Land Use, who voted yes on both proposals, called the legislation historic, and “the most aggressive affordable housing plan in the country.”

Many community boards and affordable housing advocates have publicly denounced the plans, arguing that the proposals could permanently alter existing neighborhoods, and make it unaffordable for residents to continue living there.

This opposition extended to the vote itself. At least a dozen protesters disrupted the meeting, chanting “City Council vote no, MIH has got to go.”

One group of protesters linked arms and superglued their hands together, before being dragged away from the council chambers just as voting began. One protestor requested medical assistance and was brought down from the public viewing balcony in a stretcher.

The disruption led to a 20 minute recess, after which, the council members continued voting yes or no on the proposals, with many asking permission to explain their votes, commenting on the historic nature of the two laws.

Council member Margaret Chin, who represents District 1 in Manhattan, and chairs the Committee on Aging, praised the bill.

“I believe they (the proposals) are crucial in building housing for a city desperately needs it,” she said.

The proposals have gained the support of groups including the New York Association for Affordable Housing.

“The Mandatory Inclusionary Housing program approved today is a smart policy that balances economic reality with the urgent need to produce more low-, moderate- and middle-income housing for New Yorkers. The Zoning for Quality and Affordability program will further strengthen communities by increasing affordable senior housing while providing more quality ground-floor retail options in neighborhoods across the city,” Jolie Milstein, the organization’s president and CEO, said in a statement after the vote.

Protestors at NYC city council meeting physically dragged out, all public forced to leave before vote on Bill #MIH pic.twitter.com/H0rCVXAFhj

Her comments were echoed by the Association for Neighborhood and Housing Development (ANHD), a 501c3 nonprofit that supports and helps leverage public funds to build affordable housing.

“The final program announced by the City Council moved MIH in the right direction by setting the lowest income option at 40 percent of AMI, which is affordable for families making $31,000. With this change, MIH now serves an additional 15 percent of New York City’s households — close to half a million families — that would have been left out when the proposal first entered the ULURP process months ago,” said ANHD in a statement.

“This change makes New York City’s MIH policy significantly more affordable than any other program in the country. While creating the option for affordability at 40 percent of AMI was an important step in the right direction, that option is not structured as a guarantee, so the City must commit to stepping in with subsidy that will make truly affordable rents a reality.”

With the recent expiration of 421a, the long-standing program that offered major tax breaks to developers in exchange for setting aside a percentage of affordable units in their developments, many think the zoning proposals won’t be as effective without 421a.

Mayor de Blasio has said he would push to reinstate 421a, despite previous efforts to revive the tax break program falling flat.

According to REBNY, the expiration of 421a could mean the loss of 18,000 affordable housing units in the city over the next four years.

“Without a program like 421a, one can’t build multi-family rental housing with a significant below-market, or affordable, component on a scale necessary to address the city’s needs. We are committed to working with stakeholders to fashion a program that will produce the affordable housing throughout New York City that is so desperately needed, ensures construction workers are treated fairly and creates job opportunities for city residents,” said REBNY president John Banks in a January statement.