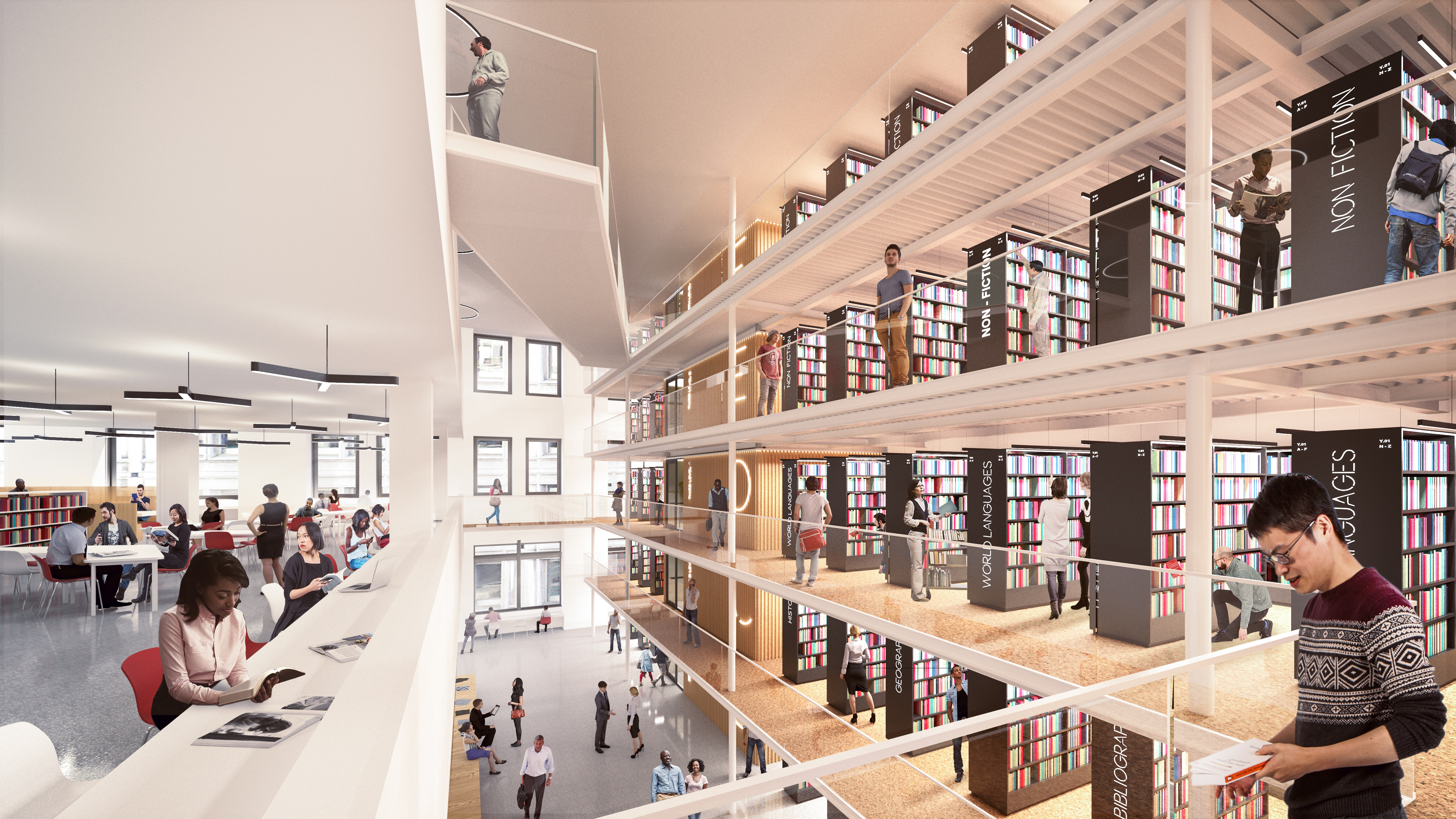 Construction boom as libraries get retooled

With four million square feet, 207 locations and some 40 million visitors a year, New York’s library systems would have an enviable real estate portfolio — if they had the money to maintain it.

To close this gap, Mayor Bill de Blasio carved out $600 million in his 10-year capital plan while the systems have resorted to selling property and partnering with developers.

The result is a construction boom that aims to make city’s libraries more accessible, more efficient and better suited to do more than loan books.

“The libraries, in ways that we forget, are the key civic space of this town,” Anthony Marx, president of the New York Public Library, said. “They are the one welcoming, free place that respects and serves everyone.

“It’s the one place that New Yorkers share in a moment of history when, let’s just say, our national ability to share and live together is under some threat.”

Marx, along with his counterparts from the Queens Public Library, Dennis Wolcott, and the Brooklyn Public Library, Linda Johnson, participated in a panel discussion last week at the Union League Club in Manhattan.

Hosted by the New York Building Congress, the group discussed what they’re doing to keep attendance numbers at record highs and how the libraries are preparing for future — strategies that include mass digitization, overhauled interiors and mixed-use projects that pair libraries with affordable housing.

“The trick is really how we use our assets to take care of our assets,” Johnson said. “We’ve all got huge deferred maintenance issues, which we’re working down. When I started, we were at $300 million and I was having a hard time sleeping at night. We’ve gotten that down to $240 million and I’m sleeping better, but there’s still a long way to go.”

Wolcott, a former deputy mayor during the Bloomberg Administration and a one-time chancellor of New York City Schools, said it’s not uncommon for his 63-branch system to have as many as 100 ongoing projects, ranging from technology upgrades in Maspeth to entirely new buildings in Hunters Point and Far Rockaway.

Historically, the library systems had to battle for their budgets on a yearly basis, but now cash is flowing more freely, forcing the libraries’ executives to redirect some of their efforts, Wolcott said.

“As we grow spaces we also have to grow the staff to go along with those spaces,” he said. “It’s a balancing act.”

The average library in the city is roughly 65 years old while the oldest buildings sponsored by Andrew Carnegie date back more than a century. Upgrades range from complying with the Americans with Disabilities Act to installing new air conditioners, elevators and, in some cases, entire new wings.

Many of the city’s small, nondescript community libraries are products of Mayor John Lindsay’s administration in the 1960s and ‘70s. These so-called Lindsay Boxes average about 7,500 s/f and lack the technical capabilities to keep up with today’s service standards, which often include classes on computer science and programming.

In 2016, the Brooklyn Public Library System sold its Brooklyn Heights branch to the Hudson Companies. The development firm has since raze the building and commenced work on a 36-story replacement, which will include 134 market-rate condos, 1,000 s/f of retail and a new, city-owned library totaling close to 27,000 s/f. Hudson also agreed to build 114 affordable units offsite as a tradeoff.

Elsewhere, BPL also decided to scrap its ill-equipped Sunset Park branch in exchange for a more modern version with a housing component. However, rather than selling the land to a commercial developer, the library partnered with the Fifth Avenue Committee, a community group focused on economic and social justice. The non-profit will finance the core and shell of the nearly-doubled library space in exchange for the right to build 49 permanently affordable units on top of it.

The New York Public Library, which oversees the libraries in Manhattan, Staten Island and the Bronx, is taking a similar approach to the renovation of its Inwood branch, partnering with the Housing Preservation and Development Department and the Robin Hood Foundation to build affordable units on site.

NYPL also is heading a $200 million overhaul of its crown jewel, the Mid-Manhattan Library on 42nd Street. Like many other projects in the city, the library system will aim to transform the stodgy old building into a more modern venue emphasizing open space while still offering private areas for group work.

All three executives view the library of today as a place of equal opportunity for the New York community; where kids without a home broadband connection can still do their schoolwork; where immigrants can ready themselves for their citizenship tests and where the unemployed can learn a skillset that gives them a fighting chance in the 21st century economy.

“We are literally the last truly open and democratic institutions,” Wolcott said. “We want people to come here and feel protected, feel safe and get the services they want. We are there to provide quality programs to every individual.”

Greystar to acquire student housing leader for $4.6B