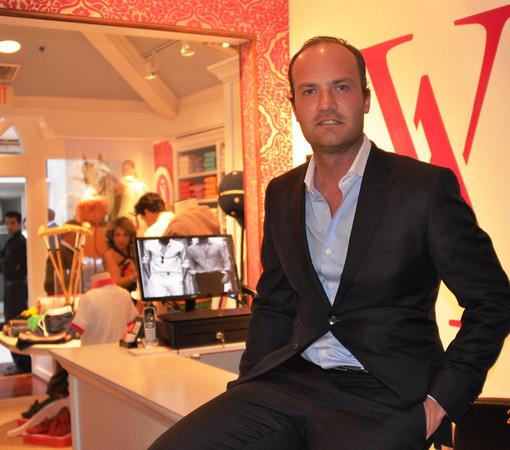 After making a name for himself as the go-to dealmaker for European luxury brands looking to plant a flag in New York City, Bertrand de Soultrait has started his own firm.

De Soultrait, who has made a big splash in his five years in the real estate industry, launched his firm Bertwood Realty about a year ago, after successful stints at two NYC-based firms.

Before making his way into the real estate world, de Soultrait co-founded Vicomte A, a French apparel company with $20 million in annual sales, along with his brother Arthur.

A native of Paris and Burgundy and a star equestrian show jumper in his home country, de Soultrait represented France on the national equestrian team as a child, a passion that eventually brought him to the United States when he moved to West Palm Beach, Florida, to train and teach show jumping.

It was after a year in college that he decided to work with his brother in fashion and, after five years, made the move to New York City to begin working in real estate.

The shift happened after a meeting with a principal at New York Commercial Real Estate Services (NYCRS) while still working for Vicomte A, who thought he’d be a natural in commercial real estate.

“I got attracted to locating sites,” said de Soultrait. “I’ve always been very attracted to the energy, fashion and business traction of New York City.”

Soon after, in 2010, he began working for NYCRS, where he quickly proved he had a knack for the game, closing 20 deals in two years.

Venerable real estate brokers Chase Welles and David Firestein of SCG Retail took notice and recruited de Soultrait to work with them at their firm.

“They wanted me to join them because I have a very different client base than them and have wanted to bring a new mix of luxury tenants and brands from Europe,” said de Soultrait. “I very quickly found my niche and I focused on representing international tenants.”

Under the guidance of Welles and Firestein, de Soultrait flourished for two years at the company, bringing international businesses to NYC, including Europe’s largest sushi chain, SushiShop, which has 100 stores worldwide, to Midtown Manhattan.

After two years at SCG, de Soultrait felt it was the right time to set up shop on his own. “I decided it was time to go, I had good clients with me and I wanted to do deals on my own,” he said. “I learned a lot with Chase and David. I’ve always been very independent and entrepreneurial. I would have never been able to start on my own if I hadn’t have been with those guys. Never.”

At Bertwood Realty, de Soultrait works with two other agents — Abe Bichoupan and Richard Gnouma, two brokers who have backgrounds in law and finance, respectively. He is looking to grow the company to around 10 people.
“We don’t have the goal to go after a bigger firm, with 20 to 30 agents,” he said. “It’s not the business model we have in mind. We’re very family-oriented and share information with one another.”

The firm’s focus is solely on Manhattan, where their connections with landlords and familiarity with the area help them close deals.

“We don’t have many clients, we actually turned some down,” said de Soultrait. “We want to focus on a certain amount and give 200 percent to them. We’re always looking for more clients, but the right clients. We only work on an exclusive basis.”

He noted that although the firm’s niche is international brands and retailers, they also work with American clients.
The firm is also finalizing a partnership with a Paris-based real estate company that has 30 agents in retail leasing and investment sales, an alliance that will see the two firms exchanging clients and giving each other leads.

De Soultrait travels to France frequently for business, pitching new clients, attending trade shows, and staying right on the pulse about the latest brands looking to make the move to the states – using his connections with immigration attorneys.

A resident of the Meatpacking District, de Soultrait focuses on following the latest retail trends, pitching new tenants, and discovering new brands. He named “negotiating” as his favorite part of the job.

“I’m seeing a lot of activity in the Flatiron District,” he said. “NOMAD, that area, is very happening. A couple of years ago, it was very slow compared to what it is today.”

In his spare time, de Soultrait continues to ride horses near his home in Greenwich, CT, and he has also started to play polo.