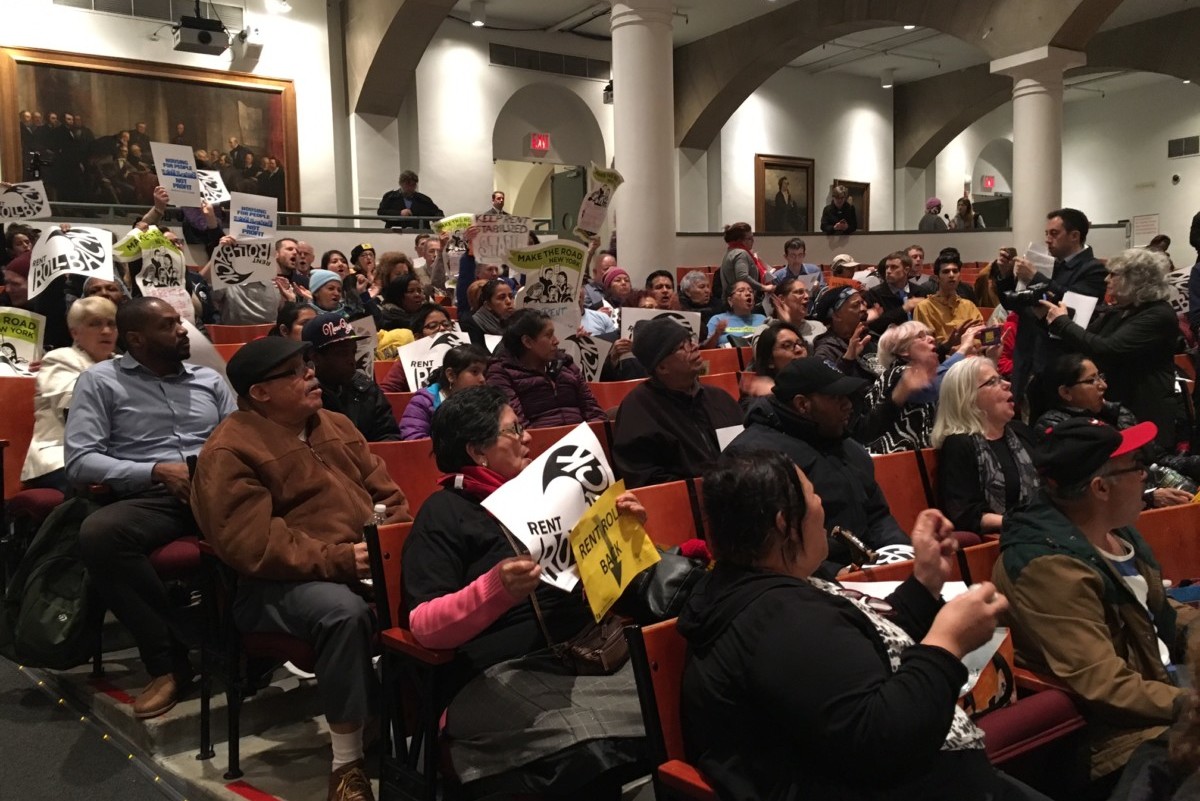 At a raucous meeting at Cooper Union in Manhattan, the Rent Guidelines Board, in a preliminary vote, approved a rent increase of one to three percent for one-year rent-stabilized leases and two to four percent for two-year rent-stabilized leases. The motion for the rent hike was submitted by board chair Kathleen Roberts, who got a five to four majority.

Both the board’s tenant and owner members opposed the proposal. Landlord member Mary Serafy called for a four percent increase for one-year leases and six percent for two-year leases.  Serafy argued that market rate tenants and landlords would suffer if there was a third consecutive rent freeze. She also justified her stance by pointing out that operating costs were up 6.2 percent. “We believe a third consecutive year with no increase for rent stabilized units will not only be unjustified but also a disaster for a significant amount of landlords,” she said. “It is important that we do the right thing for all.”

Tenant member Sheila Garcia requested rollbacks for tenants in buildings where owners raised rent through means like major capital improvements or individual apartment improvements over the last three years. She also called for a zero to two percent rent hike for tenants in other buildings. Garcia said that landlords still had other ways of hiking the rents like MCIs, IAIs, vacancy bonuses and preferential rents, adding that the median rent for stabilized renters in the city is $1,317 with tenants’ median salary at $43,261. “Our decision impacts 2.5 million tenants who are just trying to get by,” said Garcia. “Let’s not fall into the rhetoric of modest increases that don’t affect tenants.”

The other tenant member, Harvey Epstein, added, “I do hear the concerns of owners who are struggling although we haven’t met those owners ever. Owners’ income exceeds their costs. They continuously do better year after year.”

Both proposals were shot down with identical seven to two votes.

Throughout the event, tenants in the audience demanded a rollback. Ava Farkas, executive director of the Met Council on Housing, suggested that rents be rolled back by four and eight percent. The figures are the inverse of the increases that the Rent Stabilization Association, a group representing owners, had previously requested.

Along with the heckling that often drowns out the proceedings at preliminary votes of the RGB, there was also singing and chanting by tenants. Only a few people were seated in the section of the room normally occupied by landlords. The area remained silent through the proceedings.

Prior to the preliminary vote, Joseph Strasburg, the president of the RSA, accused the mayor of controlling the RGB, whose members he appointed. Like Serafy, he also said another rent freeze would be bad for tenants.

“The RGB’s position over the past three years is unsustainable – and with this year’s PIOC (price index of operating costs), the RGB will be hard-pressed to vote for another rent freeze,” said Strasburg. “The RGB’s actions over the past three years have punctured a significant economic lifeline of the city’s economy and have been bad for affordable housing and the tenants that de Blasio and the RGB purport to protect.”