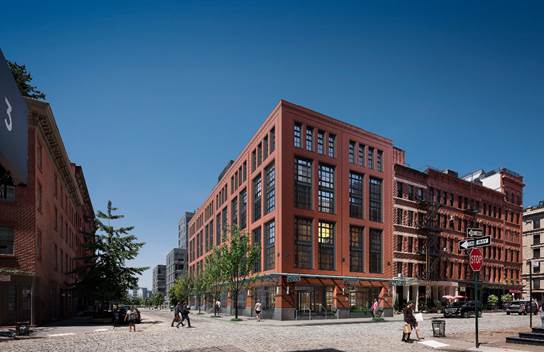 Caspi Development has topped out of 456 Greenwich Street in Tribeca, the future home of the Hotel Barrière Le Fouquet’s New York (rendering top).

Managed under the Groupe Barrière brand, the property will have 96 guest rooms and suites. Situated between Desbrosses Street and Washington Street, the eight-story hotel will feature several food and beverage destinations, a private spa, swimming pool, an interior courtyard, screening room, and board rooms.

“The topping out of 456 Greenwich Street represents a culmination of six years of tireless work by all involved, and it is our aspiration that the property will serve as a beacon of hope to the future of the city,” said Joshua Caspi, principal of Caspi Development.

“As a flagship of the esteemed Groupe Barrière brand, the hotel will open as one of the finest hospitality destinations in New York.”

Groupe Barrière operates casinos in France, Switzerland and elsewhere in Europe. The group also operates in the French luxury hotel industry and in the catering and leisure industries.

“We congratulate Caspi Development on this important milestone for Hotel Barrière Le Fouquet’s New York at 456 Greenwich Street, which reinforces the continued and unwavering commitment to the future of New York that both our companies share,” said Dominique Desseigne, chairman & CEO of Groupe Barrière. “We are delighted to be part of this project and very much look forward to the opening next year.”

Also recognized for their contributions to the development were Hana Financial Investment, DPW Holdings, APW, Ponte Equities, and Barone Management.

The topping out comes as Manhattan emerges from a doomsday year at the hands of the COVID pandemic.

According to PwC’s 4Q 2020 Manhattan lodging index, declines in occupancy and revenue per available room (RevPAR) continued to accelerate across Manhattan during the fourth quarter, as the COVID-19 pandemic curbed both holiday tourism and commercial traveler demand to the city.

With tens of thousands of rooms temporarily closed, business and international travel all but suspended, and leisure demand drivers severely restricted, fourth quarter RevPAR experienced a year-over-year decline of 85.2 percent.

As of December 2020, 18 hotel properties consisting of 5,976 rooms in Manhattan were reported to stay closed permanently. This represents a 121 percent increase in the number of permanently closed rooms compared to the second quarter of 2020.

Nevertheless, according to the city’s official tourism agency, NYC & Company, the hospitality industry is planning for the addition of an estimated 17,000 rooms in at least 110 new developments over the next 12 to 18 months.

New hotels are slated for all five boroughs, with half of the new development occurring outside Manhattan in Brooklyn, Queens, the Bronx and Staten Island.

Among the new hotels expected to come online this year, the Pendry Manhattan West Hotel will bring 164 guest rooms as well as condominiums on the upper levels. Developed by Brookfield Properties and designed by Skidmore Owings & Merrill, construction is already complex at the 281 ft. tall tower at Four Manhattan West. The 21-story project makes up one of five separate buildings in the Manhattan West master plan, which sits directly across Tenth Avenue from Hudson Yards.

Six Senses New York will also open this year in the Bjark Ingels designed The XI, a 236-unit condo and 137-key hotel hybrid where developer HFZ is reportedly in trouble with its lenders.

At the Crown Building on the corner of Fifth Avenue and 57th Street, The Aman New York has announced it will open its doors in the spring. The 83-room property will also feature 22 private residences — a first for Aman.

Also in the pipeline, Casa Cipriani at the Battery Maritime Building will bring a 164-room hotel, club and event space to the landmark property redeveloped in partnership with Centaur Properties and Midtown Equities.