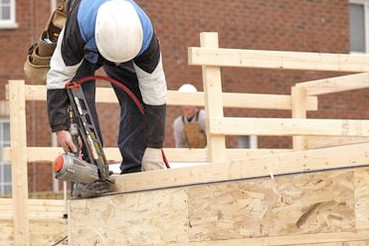 The New York City District Council of Carpenters union has approved a contract that will help members rake in nearly $100 per hour and well over $200,000 annually in wages and benefits by 2017.

Members of the union approved the new five-year contract with the Association of Wall-Ceiling and Carpentry Industries last week (Wednesday), passing the deal by a majority vote of 60 to 26.

“This contract is about saving jobs and increasing wages for thousands of hardworking New Yorkers in a time when the industry is suffering, non-union contractors are on the rise and everybody else is taking cutbacks,” said Michael Bilello, executive secretary treasurer of the New York City District Council of Carpenters.

The union carpenters currently make $85.03 per hour, broken down roughly as $46 per hour in wages and $39 in benefits (which includes medical coverage and pensions).

It took the 25,000-member District Council 20 months of haggling with Wall-Ceiling to reach the agreement, having rejected several previous contracts.

The contract includes “full mobility,” a contentious stipulation that will allow Wall-Ceiling, which employs roughly half of the District Council carpenters, to bypass the union’s “out-of-work list” and select non-union workers for jobs.

“The most important part of this contract was full mobility, which gives us the ability to move men around as we choose,” said John DeLollis, executive director at Wall-Ceiling. “On our part we’re very satisfied because we got something that we’ve wanted for a long time.”

But the contract also includes the “manning provision,” mandating that any member on the job site not affiliated with the District Council must be matched one-to-one with a carpenter from the union’s out-of-work list, a District Council spokesperson said.

Because the new contract changes the hiring ratios mandated in a May 2009 federal court order aimed at protecting against corruption, it will first need approval from the judge who issued the order, the U.S. Attorney in New York, and Dennis Walsh, a court-appointed review officer who will be monitoring the new program closely.

“I think that the time was right for the union to take all the issues into consideration and to decide if this contract was in their best interest,” said Walsh, who was installed by the courts in June 2010 after a racketeering scandal rocked the District Council in 2009, when several senior officials were arrested for breaking the terms of a 1994 consent decree against racketeering.

“The onus is completely on the union to do this and do this right,” he added. “The proof will be in pudding. If we see evidence that it’s being mishandled it will be shut down and they will have to go back to the table.”

The contract includes 90-day assessment reports and a compliance program where hours worked by carpenters will be logged via database so that any problems or discrepancies can be resolved in almost real time, Walsh said.