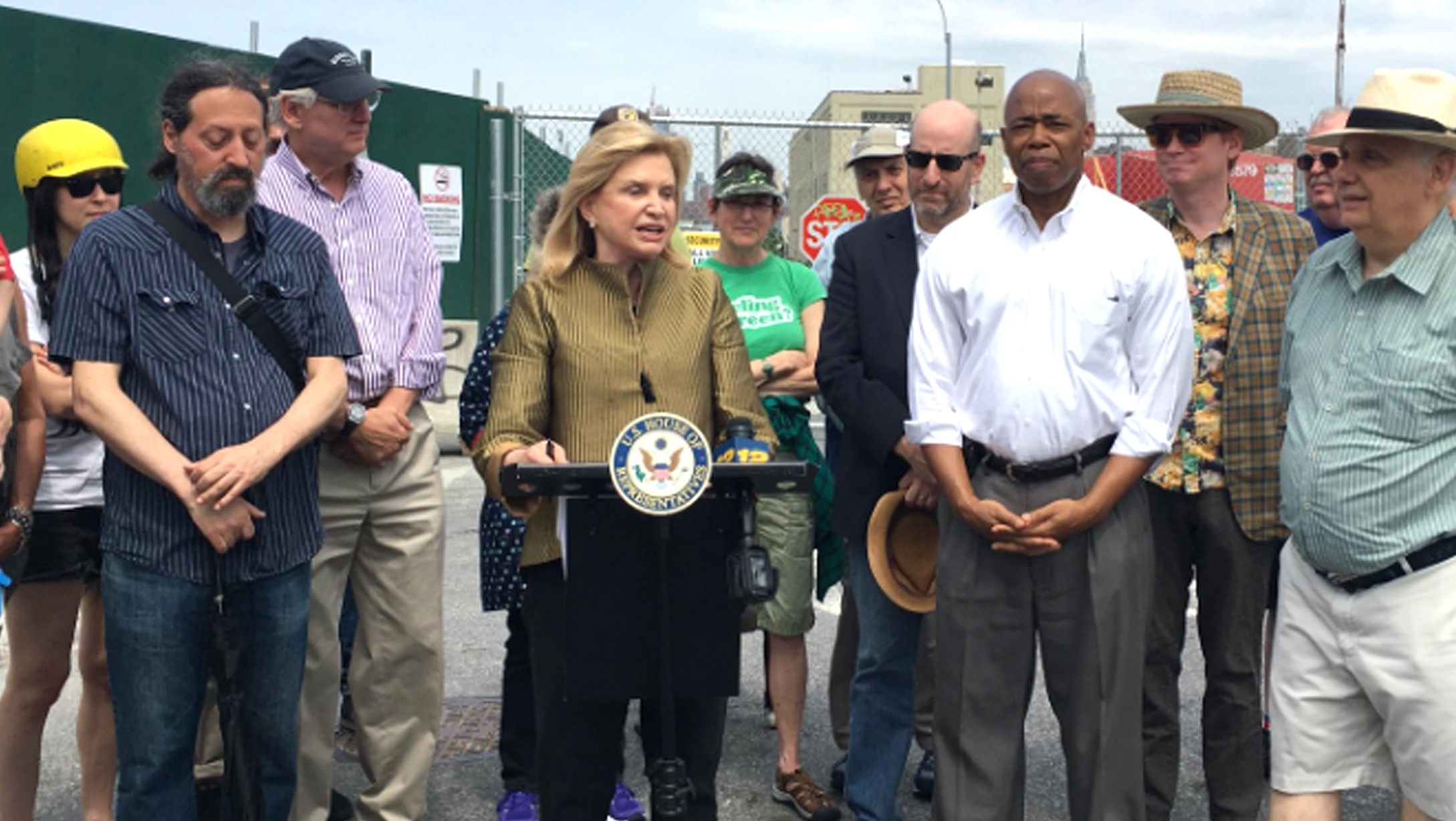 After a $100 million offer expired, politicians and officials are calling for the city to use eminent domain to seize a waterfront site in Brooklyn long-promised to be the last piece of a planned city park.

The area in question is an 11- acre site on the northern tip of Williamsburg, owned by developer Norman Brodsky. Last year, a massive four-alarm fire destroyed the CitiStorage warehouse that gives the site its name.

Residents of Williamsburg and Greenpoint and city officials rallied at City Hall Monday after the city’s offer of $100 million for the remaining parcel for the planned Bushwick Inlet Park expired August 8, urging leaders to take the site using eminent domain.

“This park was not a mere promise, it was a trade — mitigation to the community for accepting greater density, congestion and burdens on their infrastructure.” said Representative Carolyn Maloney in a letter to Bill de Blasio, published on her website, dated August 5.

“There is no time to delay. Given the owners’ intransigence, the City must exercise Eminent Domain in order to secure the CitiStorage site for the long-promised park owed to the community.ˮ

Maloney also noted in her letter to de Blasio that she had been told that the owners had received an offer of “between $170 and $180 million” and that contracts were going out shortly. Brodsky was out of the country and unable to be reached for comment as of press time.

Maloney, as well as Brooklyn borough president Eric Adams, NYC Public Advocate Leticia James, Council Member Stephen Levin, and New York State Senator Daniel Squadron have called for the city to take control of the site.
“When NYC makes a commitment to a community, we must follow through on it. It is past time for Bushwick Inlet Park,” said James in a tweet yesterday (Tuesday).

In the midst of the urging of eminent domain, the mayor’s office told DNAinfo they are still open to negotiating a price with Brodsky.

“A negotiated sale is the most expedient way to acquire this property and the City’s offer is fair,” mayoral spokesperson Natalie Grybauskas said. “The city remains open to discussions with the owner about ways to guarantee that the community’s needs are met.”

The site was a product of the Bloomberg administration, which promised to complete the 27-acre Bushwick Inlet Park, with Brodsky’s site being the last piece of the puzzle. Brodsky originally purchased the land for $5 million in the 1990s.

The city’s $100 million offer was called “low ball” by some industry insiders. The site is also being marketed by mayoral candidate Paul Massey of Cushman & Wakefield for $325 million.

The waterfront park first took shape back in 2009, when the city broke ground on the first phase of the planned 28-acre park, on Kent Avenue between N. 9th and N. 10th Streets.

The park was envisioned as part of of a 2005 waterfront rezoning of Williamsburg and Greenpoint, which paved the way for the slew of condo towers that have risen along the East River.

The first phase of Bushwick Inlet Park was the construction of a synthetic turf multipurpose field for soccer, football, lacrosse, field hockey, rugby, and ultimate frisbee. The field was funded with $7.1 million from the city, and opened in 2010. The site was a former rental car storage lot.

Another phase was completed next to the field, an outdoor park area that includes a children’s playground, a dog run, and hosts the seasonal outdoor food market Smorgasburg, that draws thousands on the weekends.