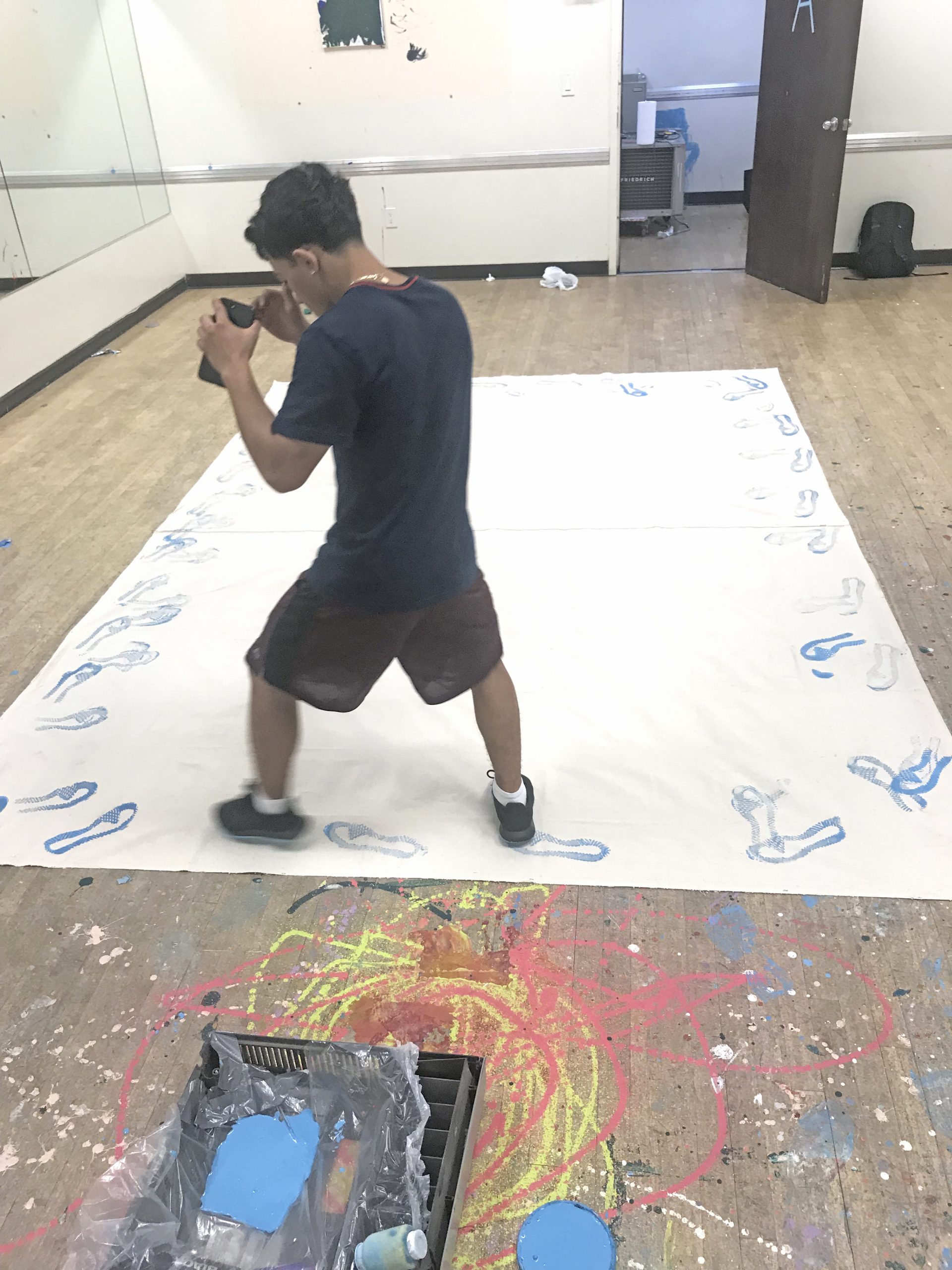 It’s not every day that you ask a Golden Gloves Boxing Champion to step into the real estate ring to help create a Soho vibe in a Midtown office space.

But Josh Berger, a managing director at Norman Bobrow & Company, did just that asking three time Golden Gloves Champion (’17,’18,’19) Andy Dominguez to collaborate in creating a piece that may help attract tenants to a building he thinks is one of the coolest in midtown Manhattan.

“Tenants who look at the space, really like the industrial chic design,” said Berger, who continues to pursue his passion for art in his spare time.

He saw a brick wall and empty office space for lease and thought that it needed some pizazz. The idea hit him while he was taking one of his many boxing lessons from Dominguez at Mendez Boxing Gym in the Flatiron District where he goes four times a week to train.

“I wanted to capture the gracefulness of Andy’s footwork and patterned movements in the boxing ring,” said Berger, who called on his own combined instincts as a real estate broker and artist.

Berger paints, photographs and creates various works of art, some of which raise money for charity. As his abstract style evolves, he has recently been commissioned by a number of clients to create pieces for either their homes or offices.

When he asked Dominguez to help him, there was little hesitation. “We’ve gotten know each other pretty well while training together over the last 2 years so when he asked me to collaborate on the piece, I didn’t even think twice…it was a great idea because boxing is art and this was one way to be involved in really showing that,” said Dominguez.

For his buddy Josh, Dominguez willfully stepped into spilled paint with his boxing sneakers on and danced around the large (12 feet by 9 feet) canvas (stapled to the floor) to create an abstract sneakered footprint design, that is getting rave reviews inside the West 54th Street office building.

“The building with its exposed brick, lots of glass and open floor plan is something akin to the lofty properties found in Soho rather than Midtown near Central Park, “ said Berger. “The art work perfectly fits in and compliments that aesthetic.”

Zar Property’s 13-story floor office building which shares two lobbies (one at 244 West 54th Street and another at 250 West 54th Street) was recently renovated to “differentiate itself from the neighboring buildings and offer something unique and creative,” according Zar Property NY head David Zar.

According to Berger, the building targets technology, advertising, media and information tenants, along with medical offices and others, who desire a creative installation in the neighborhood.

Due to the many windows, the offices can have wide-open spaces so tenants can establish open-plan layouts and/or a more office intensive layout.

Zar Property purchased the building in February 2017 for $83 million from Ascot Properties and decided to expose the brick walls/steel columns and add new high double-hung windows.

They also polished the concrete floors of the office spaces, which consist of 12-and 14-foot ceiling heights.

The main lobby at 244 West 54th Street features a marble security desk with blackened steel that was custom made in Greenpoint, Brooklyn.

When he’s not creating pieces of art and music, Berger represents tenants in office space deals and mentors/trains brokers at Norman Bobrow & Company, one of the city’s largest tenant rep leasing firms.

He won an award last year as the firm’s highest grossing broker, the firm’s most prestigious honor.

Over the last three years, Berger has used his Upper East apartment, a friend’s studio in North Carolina, and a temporary studio at 244-250 West 54th Street to create most of his art. Last spring, Berger showcased and sold over 40 original art creations in a show with thousands of dollars going to the Lower East Side Girls Club.