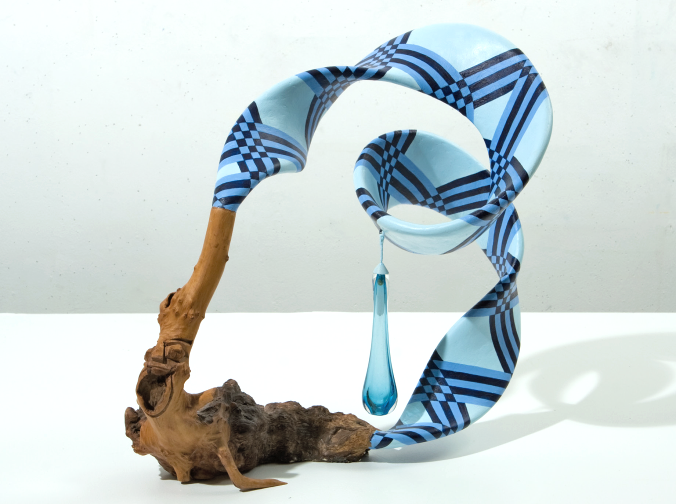 L&L Holding Company announced the creation of an art exhibition series in the lobby of 200 Fifth Avenue.

Sculptor John Newman is the inaugural featured artist in what will be a rotating series of exhibitions of art that will be displayed in both the lobby and in two street level window cases at L&L’s landmark 800,000 s/f building.

“Making a Case for Sculpture,” featuring nine sculptures by Newman, is on view now through December 31, 2016.

Newman, who has shown his work internationally and is in major museum collections, is known for his innovative use of materials, provocative use of color, and vanguard treatment of abstract form.

Architect Ross Anderson has been tapped to design the 200 Fifth installations, which will be used to display distinguished sculpture by contemporary artists on a rotating, six-month schedule. This was organized in consultation with Madison Square Park Conservancy.

L&L Holding has won widespread acclaim for its reinvention of 200 Fifth Avenue, formerly known as the International Toy Center.

Following a $135 million renovation in 2009, the office property has welcomed a wide variety of blue-chip tenants, including the world headquarters of the Grey Group, the New York headquarters of IMG Worldwide, and the Italian food and wine marketplace Eataly.

“We believe that 200 Fifth Avenue is the perfect integration of iconic New York City architecture with modern interior design and urban sophistication.” said L&L Holding President and Chief Investment Officer Robert T. Lapidus, who has been a member of Madison Square Park Conservancy’s Board since 2008.

“We view our collaboration with the Conservancy and artists such as John Newman as a natural extension of our stewardship of the property and as a terrific new amenity for our tenants and the surrounding community.”

The lobby is open to the public daily.

July- Dec. 31: L&L Holding Company has launched an art exhibition series to be located in the lobby of 200 Fifth Avenue and running through Dec. 31.  Sculptor John Newman will be the inaugural featured artist in what will be a rotating series of exhibitions of art that will be displayed in both the lobby and in two street level window cases at L&L’s landmark office building.  Newman, who has shown his work internationally and is in major museum collections, is known for his innovative use of materials, provocative use of color, and vanguard treatment of abstract form. The lobby is open to the public daily.

July 20: The New York City Chapter of CoreNet Global (CoreNet NYC) is pleased to announce that its Sustainability Community will host a panel discussion on the complex linkages between sustainability and water on July 20, 2016 at 4 Times Square from 5:30 p.m.-7:30 p.m. CoreNet NYC’s Sustainability Community will be joined by the panel’s speakers, Christina Copeland, Manager of Disclosure Services at Carbon Disclosure Project; Diana Glassman, CEO at Integration Strategy, Inc.; and Taylor McDonald, Environmental Specialist at Tandus Centiva.

Aug. 18: The Herbert M. Citrin Humanitarian Award Dinner to benefit Canine Companions for Independence (CCI) will be held at Cold Spring Country Club, Huntington, NY.  Honoree Richard Cohen, President of the Southern Poverty Law Center, will speak on social justice in America. Each year a different charity is chosen to be the beneficiary of this event, which is underwritten by the Citrin Foundation.  Register Online at  www.golfeventplanning.com. For information on sponsorship or journal advertising, call 516- 393-5870 or email Larry or Christine at lbattaglia@golfeventplanning.com or cdbattaglia@golfeventplanning.com

Sept. 13: The Asian Real Estate Professional Association (AREPA) will host a Fall  networking event from 6:00PM to 9:00PM at The Gansevoort Hotel – The Blue Room (Ivy Lounge) located at  420 Park Avenue South (Bet 28th an 29th St).   Event is free for 2016 AREPA Members.  There will be a $15 charge for entry to this event. $20 at the door.  As there are limited tickets,    this event will sell out so please order early.   For further information  for this event and for membership information, please go to www.arepainc.org

Oct. 24-24: The Urban Land Institute  2016 Fall Meeting will be held at the Kay Bailey Hutchison Convention Center in Dallas. Sessions will include: The intersection of real estate and technology; Suburbs in the city and cities in the suburbs; Conversions of obsolete industrial space; and Busting myths about the economy. For full details go to www.uli.org

Nov. 17: WX New York Women Executives in Real Estate (WX) will host its 2016 Woman of the Year Gala from 6:00 pm – 10:00 pm at The Pierre, 2 East 61st Street. The gala will honor Wendy Rowden of 42nd Street Development Corporation for her accomplishments in real estate and her contributions to WX. MaryAnne Gilmartin of Forest City Ratner, will make introductory remarks.  For more information, please visit www.wxnyre.org.