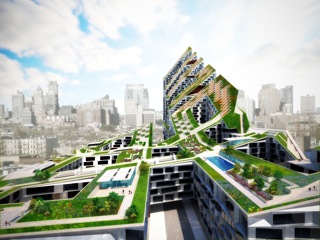 In response to concern about the direction that development of the Atlantic Yards might take and the potential impact on the surrounding communities, a group of architects exploring alternatives from a design perspective will present their work in a group gallery exhibit in Prospect Heights.

The exhibit, Five Proposals for the Future of the Atlantic Yards, opens June 5 and will run until June 22 at Warehouse623, at 623 Bergen Street.

The five architects will present their alternative proposals for the Atlantic Yards site, which presents a major opportunity to create a significant new architectural presence and major urban design gesture amid several Brooklyn neighborhoods.

“This is a valuable chance to hear from the people of New York and around the world as to the direction that Brooklyn can take in shaping a millennial city,” said Barry.

“Development plans too often neglect to consider the many ways in which they may impact surrounding neighborhoods,” added Joshua Zinder, AIA, founding principal of JZA+D. “We hope this exhibition raises awareness of how thoughtful design can make large-scale project successful from every perspective — even elevating them to points of civic pride.”

“We’re excited to partner in this exhibition and are grateful to Thomas Barry of OPerA Studio for his dedication to this program,” Zinder added.

Each scheme provides 4,728,000 s/f of housing and 156,000 s/fof retail space, equivalent to the masterplan presented by Forest City Ratner.

“The five proposals are also intended to illustrate to the community that there are alternative architectural possibilities, all equally profitable for the developer,” Barry added.

The architects involved hope to open up a dialogue about the site’s potential, giving the community a deeper understanding of architectural and urban planning possibilities, and what can be done to develop one of the most significant large scale sites in New York City.

Meanwhile, Forest City Enterprises, Inc. is expected to close on its joint venture with Shanghai-based Greenland Group for the development of the 22-acre site within the next few weeks.

Under the terms of the JV agreement, Greenland Group will make a capital contribution of $200 million to acquire a 70 percent equity interest in the project, excluding Barclays Center and B2, the first residential building.

Going forward, both companies have said they will invest and share development risk in proportion to their respective ownership stakes on the entire remaining project, including infrastructure costs and vertical construction for both Phase 1 and Phase 2.

Total estimated site acquisition costs are expected to be approximately $1.3 billion. In addition to costs incurred to date, these include projected costs to complete the MTA permanent rail yard, construction costs for the platform above the yard, acquisition of additional land and air rights, as well as other anticipated costs, excluding vertical development.

Based on the 6.4 million square feet of remaining entitlements in both phases, the total anticipated costs yield an expected average cost per square foot of approximately $180-$220 per square foot, prior to vertical development. That cost will be allocated across the project based on the relative sales value of the mix of rental apartments, condos, retail or office components for each future building, Forest City said.

“Our joint venture with Greenland will bring another strong real estate partner to this unique and transformational project for Brooklyn. We believe this joint venture enhances Forest City’s ability to both fulfill our commitments to the community and create value over time by achieving an appropriate, risk-adjusted return on our invested capital.”

MaryAnne Gilmartin, president and chief executive officer of Forest City Ratner Companies, the New York-based subsidiary of Forest City Enterprises, said, “The development program for Atlantic Yards includes 2,250 units of affordable housing and eight acres of open space, as well as more than 4,100 units of market-rate rentals and/or luxury condos, all in one of the strongest markets in the country. We are confident that Brooklyn’s continued strong demand for rental housing and condos, along with steady growth in rents and sales prices, will drive strong future returns for the project.”

Additional information about next month’s exhibition can be found at www.atlanticyardsalternatives.com