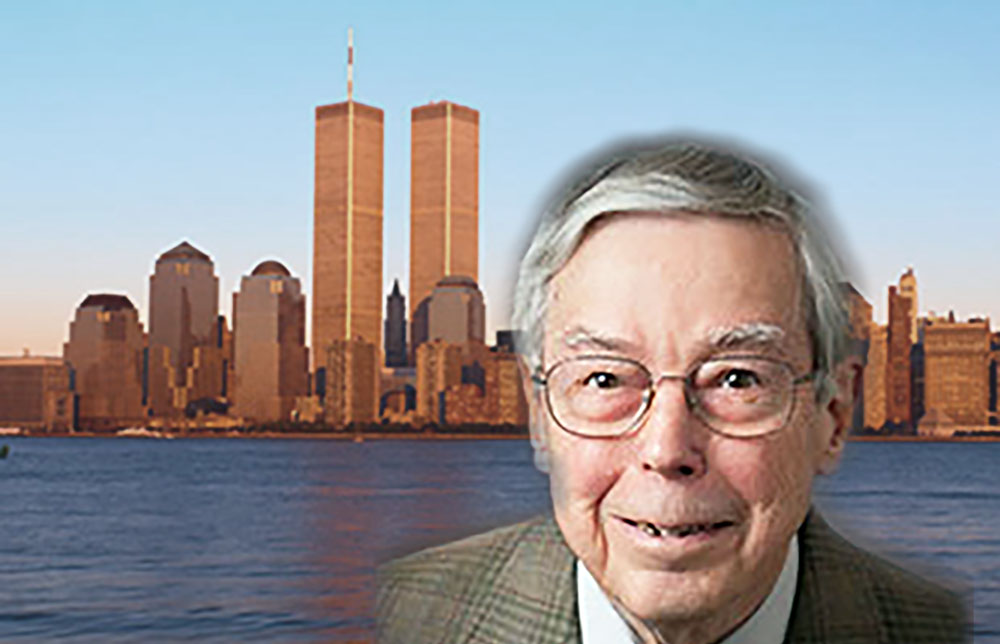 The steel design community suffered a huge loss Thursday when Leslie E. Robertson, whose career came to be defined by his work on the World Trade Center, died following a diagnosis of blood cancer.

“Les had such a cordial influence on others, including for me personally,” said Charles J. Carter, SE, PE, PhD, president of the American Institute of Steel Construction.

“I first met him as an undergraduate student when he agreed to meet for a morning to discuss his recently completed Bank of China building. He made the whole concept of the building lateral system clear to me (as a student!) in about 20 minutes with just a few sketches and a brilliantly simple physical experiment that proved he found a creative way to eliminate column bending.”

“We’ve lost a giant whose work will continue to speak volumes for generations to come,” Carter said.

Robertson won AISC’s J. Lloyd Kimbrough Award in 2001. The award, named for AISC’s first president, honors engineers and architects who are universally recognized as the pre-eminent steel designers of their era. It is the highest honor AISC gives designers; only three other people have received the Kimbrough Award since 2000.

Robertson was in his 30s when he took on the World Trade Center project – his first high-rise structure. He designed an innovative framing system that used closely-spaced exterior steel columns and long-span steel floor trusses to create large, open, column-free spaces.

On September 11, 2001, those towers withstood the impact of fully loaded, high-speed aircraft that were much larger than the Boeing 707 Robertson had considered during the design process. Thousands of people were able to escape before the towers collapsed, but Robertson was haunted by their fall. (The movie night at the 2019 NASCC: The Steel Conference featured the documentary “Leaning Out,” which focused on not only Robertson’s reaction to the World Trade Center attacks but on his remarkable career as a whole.)

Robertson was the lead structural engineer of the Twin Towers of the original World Trade Center in New York City. He was the structural engineer on numerous other projects, including the U.S. Steel Tower in Pittsburgh, Shanghai World Financial Center and the Bank of China Tower in Hong Kong.

Born on February 12, 1928, in Manhattan Beach, California, Robertson began is engineering career began in 1952, when he joined Kaiser Engineering. He worked as a mathematician, structural engineer, and as an electrical engineering during this time.

He later went on a road trip across the country to California, and later to Seattle where he ran out of funds in 1958, and joined the Seattle- based structural and civil engineering firm Worthington and Skilling.

When Seattle-born American architect, Minoru Yamasaki won the competition to design the World Trade Center, Robertson and his firm Worthington, Skilling, Helle, and Jackson (WSHJ) got the engineering contract.

Designed between 1966 and 1971, this was the firm’s and Robertson’s first high rise construction. His interactions with Yamasaki led to the conceptualization of the tube design for the buildings with exterior columns that were two feet apart along the building’s height, specifically designed to provide a sense of enclosure for people in the building. This also meant that unlike most skyscrapers of the time that were supported by concrete or steel frames with columns interrupting the interiors, the WTC design enabled column-free interiors, with the weight being handled by the exterior columns and the steel and concrete cores. Steel trusses supported the floors and connect exterior columns and the central cores.[2]

In 1967 Robertson was made a partner and the design firm was renamed Skilling, Helle, Christiansen, Robertson. The firm split its operations in 1982, with Robertson renaming the east coast operations Leslie E. Robertson Associates RLLP. Robertson would retire from the partnership in 1994, but, would continue to work for the firm on projects until 2012.