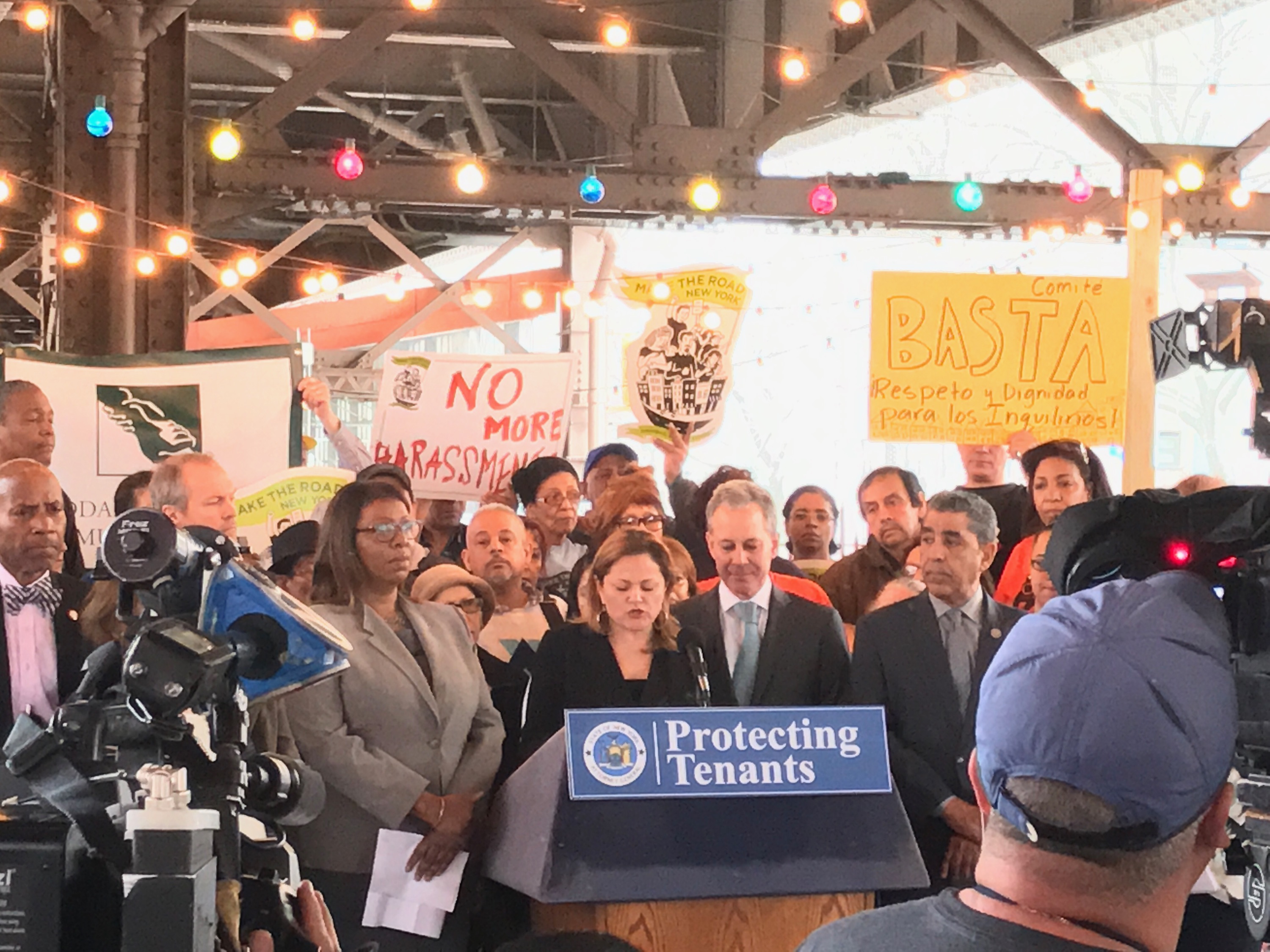 At a press conference in East Harlem this morning, Attorney General Eric Schneiderman announced that he is introducing new, tougher legislation in a bid to crack down on harassment of rent-regulated tenants in New York.

The current state law demands prosecutors reach an “inexplicably high bar” in order to criminally charge landlords with harassment of rent-regulated tenants, according to Schneiderman, and in the past twenty years, not a single landlord has ever been convicted of the crime of Harassment of a Rent Regulated Tenant.

The AG’s legislation seeks to change that by setting standards that removes the need to prove physical injury to a tenant, opening the door to prosecutions arising out of more commonplace tactics such as turning off heat and hot water, exposing young children to lead dust, and making rent-stabilized buildings deliberately uninhabitable for current tenants and their families.

Schneiderman’s office argues that this sets the bar too high, citing recent analysis of the NYS Division of Criminal Justice Services data showing that not a single landlord has ever been convicted for harassing a rent-regulated tenant.

According to the AG’s office, the legislation will add a new class A misdemeanor that would apply to landlords and their agents who, with the intent to cause a rent regulated tenant to vacate their home, engage in a “course of conduct” that is reasonably likely to, and does in fact, interfere with and disturb the comfort, repose, peace and quiet of such tenant in the use of their home.

It expands the existing class E felony Penal Law statute to make it unlawful for landlords or their agents to attempt to force tenants in two or more rent-regulated units to move out by engaging in a “systematic ongoing course of conduct” or “repeatedly committing acts over a period of time” that “is or are reasonably likely to interfere with and disturb, and does or do interfere with and disturb, the comfort, repose, peace and quiet” of such tenants in the use of their homes, and makes it a class E felony for a landlord to commit the new class A misdemeanor offense after he or she has been convicted of that crime within the preceding five years.

The new class A misdemeanor imposes a maximum penalty of up to one year in jail. The class E felony carries a maximum sentence of up to four years in prison.

Schneiderman was joined by City Council speaker Melissa Mark-Viverito, Manhattan borough president Gail Brewer, and tenant advocacy groups at the event, which comes on the heels of increased reports of tenant harassment by landlords on the basis of their immigration status.

Last month, a group of tenants  living in a rent-stabilized building in East Harlem filed a civil suit against their landlord after they threatened to have them “rounded upˮ by Immigration and Customs Enforcement (ICE) if they failed to vacate their apartment.

Schneiderman said his office has received a number of reports of tenant harassment specifically based on immigration status.

“Every New York tenant has a basic legal right to live in peace in their home. Harassment of tenants based on immigration status is not only appalling – it’s unlawful,” said Schneiderman in a press release. “This guidance will help ensure that all tenants know their rights – and should serve as a reminder: my office will pursue to the fullest extent of the law any landlord who illegally harasses tenants.”

Schneiderman also released a “Know Your Rights” guidance for immigrant tenants in New York State to help tenants in the event that they face landlord harassment on the basis of immigration status.

The guidance covers a variety of legal protections that tenants have across the State of New York. Landlords may not unlawfully evict or lock-out, harass, or deny essential services to tenants based on their immigration status. It also offers information on specific protections that exist in certain parts of the state, such as protections derived from New York’s rent stabilization law, and specific laws for undocumented families, such as provisions of the New York City Human Rights Law that prohibit discrimination on the basis of actual or perceived immigration status.

The AG’s office also announced they have partnered with the statewide New Americans Hotline – 1-800-566-7636 –  a service that tenants can call and be connected with qualified legal service providers that can represent them in housing court if  they are harassed or targeted for eviction. All calls are confidential and anonymous.