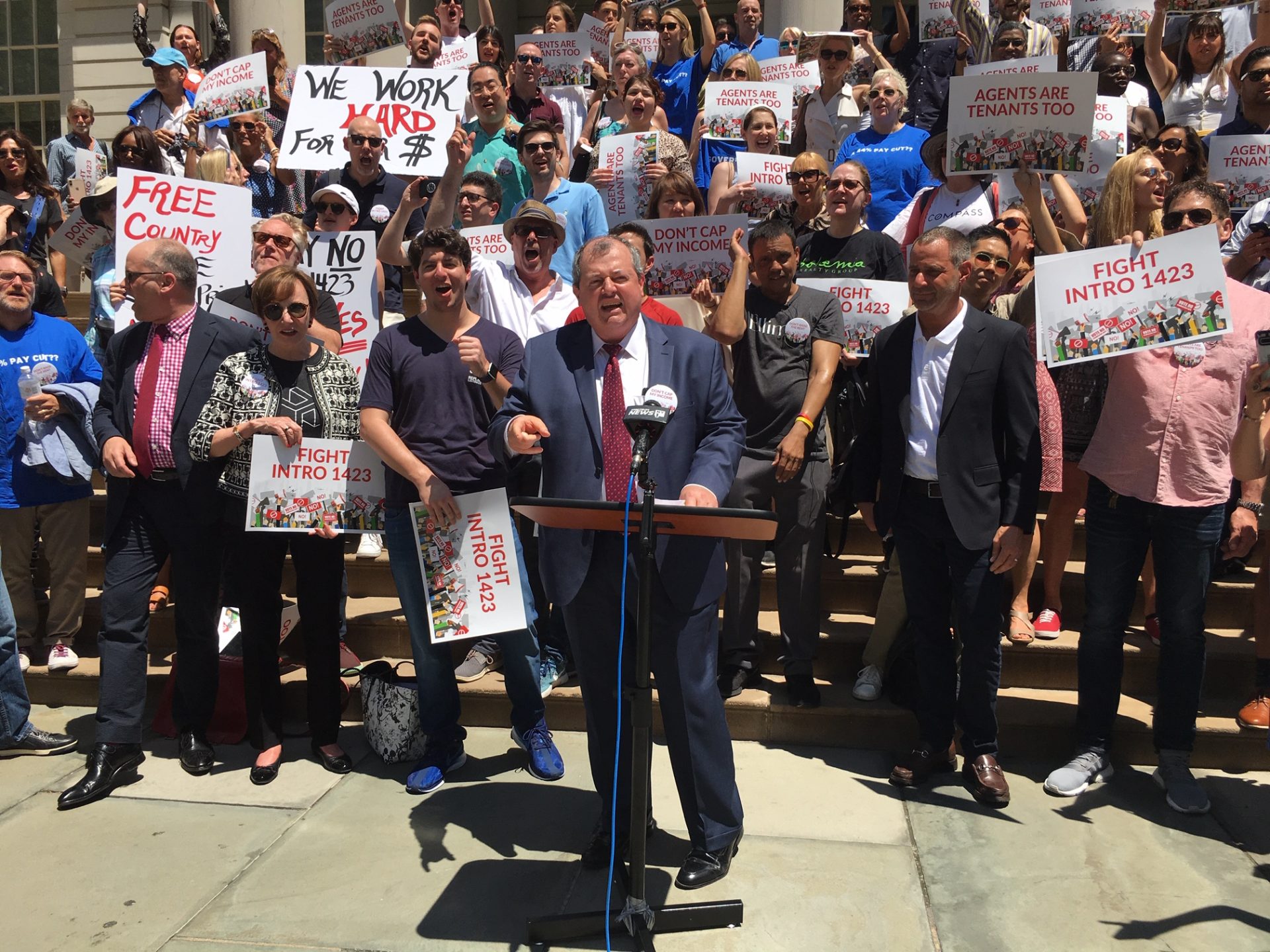 2019 was a year that saw the enactment of the strongest rent regulations in history, a kiss-off to the entire City of New York from an e-commerce boss, carbon emissions controls that will impact 50,000 buildings and the ouster of co-working’s onetime king.

Despite the real estate industry’s concerns of warehousing and older housing stock being left to crumble, the New York State legislature’s renewal of rent regulations included far stricter limits on how landlords could raise rents at stabilized properties.

The new laws also did away with vacancy bonuses and allowed municipalities outside the city to create Rent Guidelines Boards, among other new rules.

An industry-backed lawsuit has since been filed to challenge the new laws, which is still pending. Since the new regulations went into effect, some owners have halted improvement projects, including The Blackstone Group, which was also accused of warehousing apartments in Stuyvesant Town.

In April, Mayor Bill de Blasio announced his plan for a Green New Deal that included what was initially reported a ban on glass buildings. But ultimately the carbon emissions bill, which will be rolled out over the next decade, will impact 50,000 buildings, 59 percent of them residential, 41 percent commercial. Owners of buildings bigger than 25,000 s/f will have to limit emissions per square foot with city-owned and affordable housing buildings having separate requirements than the others. Experts have predicted owners will spend a total $20 billion to ensure their properties become compliant. But with buildings responsible for 70 percent of the city’s carbon emissions, the law should have a pretty significant impact on the environment.

On Valentine’s Day, Amazon strongman Jeff Bezos told New York: It’s you, not me, abruptly canceling plans to open one of two new headquarters in Long Island City and leaving officials involved in negotiations shell-shocked. Bezos blamed local politics and critics wary of the reported $3 billion in tax giveaways in exchange for the promise of 25,000 jobs. Since then, the real estate industry has predicted Amazon would still want to hold court in the city to take advantage of the local talent pool. Those speculators were proven right when in December, the e-commerce giant agreed to lease over 300,000 s/f of space at a repositioned SL Green building adjacent to Hudson Yards — sans tax breaks.

Five years and $25 billion after construction began, the swanky Hudson Yards mega-development finally opened with a star-studded ceremony in March. As the largest private development in the U.S., the community will contribute nearly $19 billion annually to New York City’s Gross Domestic Product, and nearly $1 billion annually in state and city taxes. It’s also the first LEED-certified neighborhood. While the luxury development also includes 1,300 affordable units, it’s still the priciest neighborhood in the city, as of the third quarter of 2019. A report by PropertyShark said that with a median sale of $5 million, the related-owned Hudson Yards even outpriced Tribeca ($2.4 million) by a wide margin.

In June, the state flipped its landlord-friendly rules and passed the Housing Stability and Tenant Protection Act of 2019 into law.

REBNY chairman John Banks lamented: “There are many losers including small property owners, contractors as well as tenants.”

“It will worsen the city’s housing crisis. The construction of future affordable units will slow, if not end altogether, the housing vacancy rate will worsen and nothing will have been done to make it easier for those who struggle to pay their rent.”

The 125-page complaint, filed in the U.S. District Court, Eastern District of New York, names the city, the Rent Guidelines Board along with each of its members, and the state Homes and Community Renewal Commissioner RuthAnne Visnauskas as defendants.

Because putting every other kind of mom-and-pop shop out of business just wasn’t enough, Amazon decided to put boutique brokerages in its cross hairs as well, partnering with Realogy on an agent/buyer matchmaking service called Turnkey. The venture, announced in July, debuted in 15 cities, though New York wasn’t one of them. If a deal through Turnkey is sealed, the buyer receives packages of home services and goods from Amazon or Amazon-curated affiliates, which are paid for by Realogy. The business model has seen some criticism by others in the industry who believe the amount of Amazon goods being offered will effectively wipe out a broker’s commission.

Despite mercury melting temperatures on one mid-July afternoon, hundreds of rental real estate agents and other industry professionals descended onto the steps of City Hall to protest a bill that would cap the commission an agent could collect from a tenant to one month’s rent. The legislation was part of a package aimed at lowering upfront costs for renters that can add up to thousands of dollars, including security deposits and application fees. However it was the commission bill that drew out the crowds, with agents arguing that they already had a tough enough time earning a living. The bill would only apply to brokers hired by tenants and also allowed for the broker to charge more than a month’s rent, so long that any amount beyond that first month’s rent is paid by the landlord. Some agents however worried that following the new rent regulations landlords wouldn’t be willing to shell out any more money for marketing. The legislation is still pending.

In a residential real estate clash of the titans, $7 billion umbrella brand Realogy accused rival Compass of agent poaching and cheating its way to the top. In a suit filed in July 10, Realogy said Compass had been pilfering agents from competing firms using over $1 billion in investor funding and “grossly overpaying” them at unsustainable rates. Additionally, they alleged Compass even encouraged its recruits to ignore non-compete agreements.

In August, a huge question mark hung over WeWork’s IPO prospectus as the space-sharing giant had no clear plan to cut costs and sent investors into a panic. By late September, the IPO was officially withdrawn by WeWork’s newly installed leadership as founder Adam Neumann was ousted with a $1.7 billion payout. Industry experts still think that many of the problems faced by WeWork were more about the company’s internal error of making outsized growth its business model regardless of profit. Coworking/flex space is still estimated to comprise 12-15 percent of the office market and reports have indicated the sector won’t suffer, even in the event of an economic downturn.

September saw Extell Development Company top out Central Park Tower. At 1,550 feet high, it will be the tallest residential building in the world.

The luxury highrise is located on West 57th Street, along “Billionaire’s Row,” where Extell also developed the first supertall condominium, One57.

Designed by Adrian Smith + Gordon Gill Architecture (AS+GG), the building features a facade made up of glass and satin-finished stainless steel, and the structure cantilevers to the east at a height of 300 feet. The owner has said closings are slated for 2020 and pricing for the smallest available homes (two bedroom, 2-bath units) starts at $6.9 million. The largest units currently on the market are five-bedroom, 5-bath units priced at $63 million.

In October, 16 years after the project was first conceived, developer Triple Five Group announced it would open the long-delayed American Dream super-mall. It was originally developed by the Mills Corporation and Mack-Cali Realty. After construction began in 2004, the project was expected to be completed and opened within two years. But five years later, in May of 2009, lenders withdrew following the Lehman Brothers collapse.

In November, the industry pushed back against a new City Council plan calling for commercial rent control. This bill, introduced by Council Member Stephen Levin, Intro 1796, would create a Council-appointed board not unlike the Rent Guidelines Board that would set annual lease increases on commercial spaces, including retail and manufacturing storefronts, instead of landlords. The Real Estate Board of New York and other owner groups have staunchly opposed the still pending bill, citing other government regulations burdening businesses such as a higher minimum wage and paid sick days.

In November, the City Council passed a whopping 17 bills at once to protect tenants from bad acting landlords, from requiring disclosures on buyout offers to cracking down on nuisance construction to allowing the DOB to issue a stop work order at a site if an inspector is unable to gain access. Other bills would create a database of design professionals who’ve been sanctioned, provide four years of apartment rent history to tenants and require DOB inspections to verify if buildings reported to be unoccupied are truly vacant. Former New York City School Construction Authority vice president Melanie La Rocca was appointed DOB Commissioner with a remit to implement strict new safety guidelines and the mayor’s ambitious green plan.

As 2019 drew to its close, architect Erica Tishman was fatally struck by debris from a Times Square building as she walked by in December. Owners throughout the city scrambled to ensure their own buildings were up to code as the DOB, which had fined the owner of 729 Seventh Avenue for failing to make needed repairs, conducted a citywide sweep. On New Year’s Eve, the DOB held a public hearing on changes to the Facade Inspection and Safety Program (FISP) that requires owners of buildings taller than six stories to inspect and repair their facades every five years.

The ups and down of developing elevator safety codes