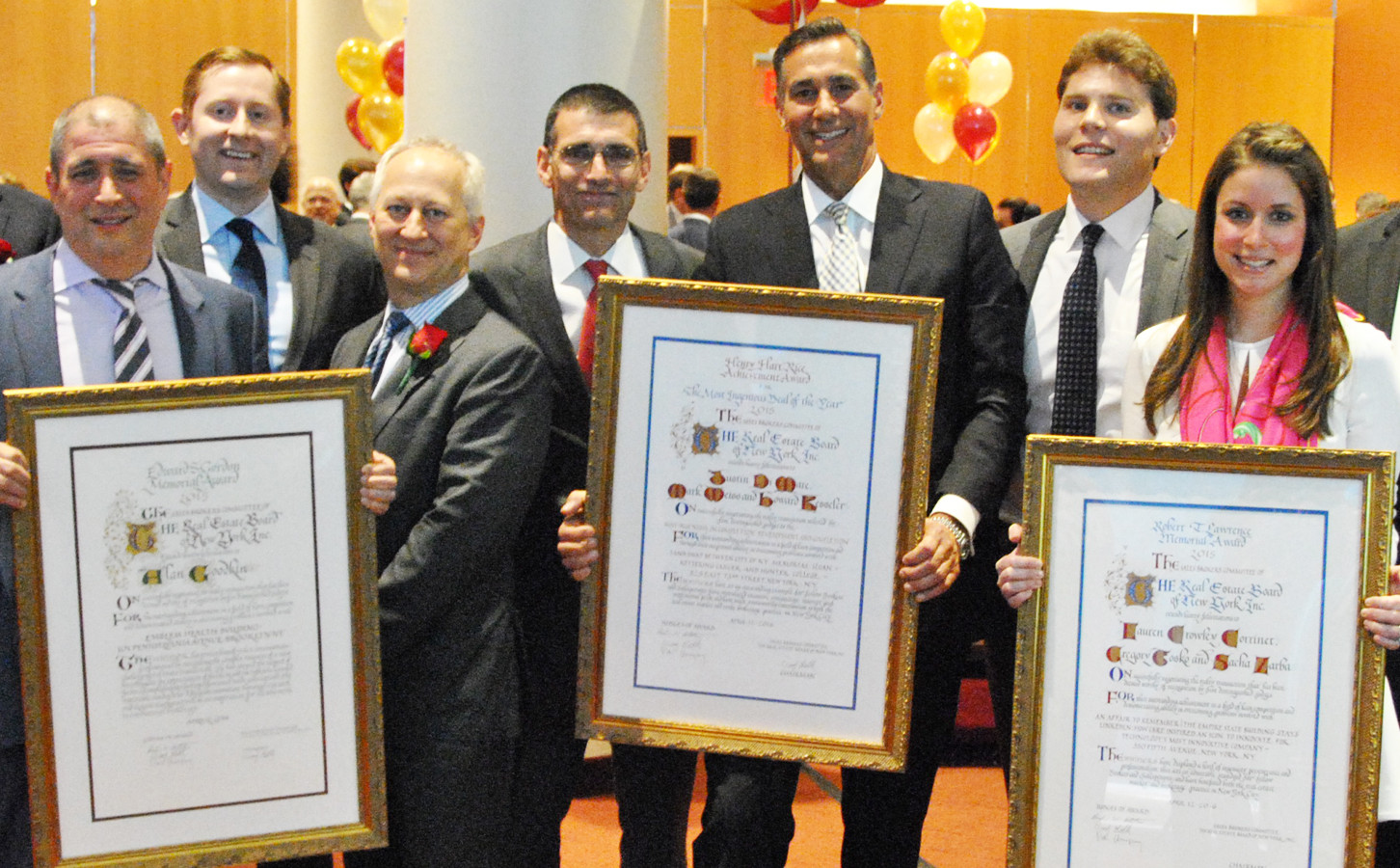 The annual Ingenious Dealmakers awards last night showcased a slew of real estate deals that will have a lasting impact on the city’s healthcare and tech sectors.

Lauren Crowley Corrinet accepted the second place award on behalf of the CBRE team that placed second for bringing LinkedIn to the iconic Empire State Building.

Gregory Tosko collected his 7th Ingenious award as part of the CBRE team that included Corrinet and team leader Sacha Zarba. They collected the Robert T. Lawrence Memorial Award for their 126,000 s/f LinkedIn deal at the Empire State Building.

Corrinet said,  “Our team is truly honored to receive an award given by our fellow members of the real estate industry—and we were extremely lucky to work hand-in-hand with the forward-thinking team at Empire State Realty Trust, an excellent partner.

“But so much of the credit belongs to our wonderful client, LinkedIn. They’re brilliant innovators—as well as truly good people—and this is ultimately all about helping them achieve their extraordinary vision.”

Presenting the first prize to the NGKF team, Heller said, “The winners of this year’s competition looked past the easy answers and demonstrated the ingenuity required to find the most beneficial solutions for their clients and the community.”

Justin DiMare, Mark Weiss (now at Cushman & Wakefield), and Howard Kesseler worked the marathon five-year deal that started with NGKF proposing the city sell the site of a demolished sanitation truck depot at 525 East 73rd Street and use the proceeds to build a modern new facility elsewhere.

When the EDC issued a request for proposals saying the Upper East Side site had to be used for healthcare, education or scientific research, the brokers arranged a partnership between  Memorial Sloan-Kettering, which had the money to build a new campus, and Hunter College, which had surplus  land  at its Brookdale Campus at 425 East 25th Street for the city to build a new truck depot.

The end result was a new hospital facility for Memorial Sloan-Kettering and a nursing school for Hunter College at 525 East 73rd Street and $215 million for the city to build its new truck depot at 425 East 25th Street.

Accepting the award on behalf of the team, veteran Weiss (collecting the third Ingenious award of his career) recalled a press conference to announce the deal with then mayor Michael Bloomberg who congratulated him on a job that will result in some lives being saved.  “I’m never at a loss for words,” said Weiss, “but that just took my breath away.”

For his part, DiMare said, “We are thrilled to be recognized for this transaction. This was a great example of thoughtful and proactive land use policy from the City which we hope continues toward another special mixed use project on the now City-owned Brookdale site.”

The EDC is now in the throes of a public review process for the college’s Brookdale site at 425 East 25th Street.

The current plan includes a $200 million, 450,000 s/f garage facility to meet the city’s sanitation needs, as well as “potential residential development and public space.” Construction is anticipated to begin on the garage in 2019 and take three years.

The EDC is expected to make an announcement soon following several months of community consultation to identify local priorities for the remainder of the site that occupies a full city block .

The judges for REBNY’s 2015 Ingenious Deal of the Year Awards competition were: Andrew Albstein, Esq. of Goldberg Weprin & Ustin, LLP, Dov Hertz of Extell Development Company, John Gunther-Mohr of Santander Bank, Peter Hauspurg of Eastern Consolidated, and Woody Heller of Savills Studley. Winners were judged in the categories of sales, leasing and finance.

The Upper East Side complex Memorial Sloan Kettering and The City University of New York (CUNY)/Hunter College are jointly developing is expected to be complete in 2019.