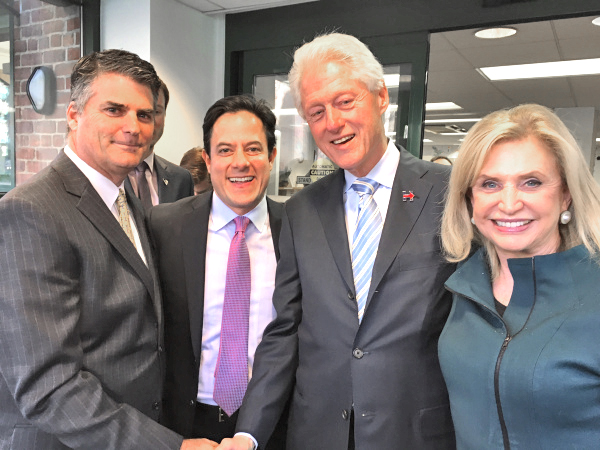 With the presidential primary a mere eight days away, Hillary Clinton’s campaign got a boost in Stuyvesant Town, when her husband, former President Bill Clinton, stopped by to schmooze and pose for pictures with voters.

The visit by the former leader of the free world on Monday was almost as guarded as he was, with the event kept quiet up until the last minute when word started to get around the neighborhood. At that point, the Community Center started to fill up much more than it usually would for afternoon bridge games, mainly with politically connected residents. However, many of the seniors who’d gone there earlier to play cards were still shocked to see a president campaigning on the property for the first time in decades. Then presidential candidate John F. Kennedy had also made a campaign stop in Stuy Town in 1960.

With secret service men in tow, who cautiously allowed tenants to tap Clinton on the shoulder or back while requesting photos with him and asking him questions, the former president eventually made his way around the entire community center.

When shaking his hand, one woman informed him, “You are gorgeous.” In response, Clinton said, “It’s been a long time since a girl said that to me.”

He also got a compliment of sorts longtime resident Tony Koestler, who told him he looked better in real life than he did on TV. An unruffled Clinton agreed with the man. “Most people with round faces do,” he said.

While shaking the hand of Asher Garodnick, Councilman Dan Garodnick’s five-year-old son, his mother Zoe Segal-Reichlin asked Asher, “Who are you voting for?” to which he responded, “Hillary.” “He’s a smart young man,” quipped his father, who was standing nearby. Garodnick had helped organize the event, which also attracted the presence of some local police officers who, along with Public Safety officers, eventually blocked off the First Avenue Loop Road to traffic.

Meanwhile, on a few of occasions when tenants spoke of their political concerns, Clinton offered some consistent advice. “Vote for Hillary. She’ll be better.”

Some residents recalled that in 1992 when he was running for president, Clinton had campaigned nearby with a political club at a space on East 21st Street, west of First Avenue.

“I think the fact that he’s come full circle, that he’s now campaigning for his wife is terrific,” said Laura Koestler, who recalled the prior event. “To have him back because of the history is terrific.”

On being back in the area, Clinton said, “I like it here. It’s a genuine community.” He then added, “It has a great Congress member,” referring to Carolyn Maloney who was standing nearby.

When one resident asked if his wife were to be elected would this mean he would be referred to as the first man, Clinton seemed amused at the thought. “Whatever they call me is fine.”

The chatter got a bit more serious when Clinton discussed the issue of political redistricting and gerrymandering, blaming some of the gridlock in Washington on this phenomenon.

He also said because of this Democratic voters need to turn up on April 19.

“Republicans vote in higher numbers in midterm elections than Democrats do,” he said. “They won a lot of legislatures and governorships due to redistricting. It undermines the willingness to compromise. You should stand up for what you believe, but get something done. You don’t want to make perfect the enemy of good.”

He also said hardline politicians are more productive when they’re not busy bashing their opponent, giving an example of critics of President Obama. “He’s not a Muslim. He wasn’t born in Africa. You don’t have to hate somebody because you disagree.”

The economy came up at one point with Clinton pointing out that after his terms, he’d left the economy in better shape than he’d found it. This was after a senior brought up Republican presidential candidate Ohio Governor John Kasich, and Clinton recalled having “debates” over the budget with him when Clinton was president.

He then said he’d be heading out, telling the crowd, “Bless you all” and he also apologized to the group who’d been sitting at a table in front of him for interrupting their bridge game, prompting laughter around the room. Clinton didn’t make a quick getaway though, instead posing for dozens more photos with residents along the Loop Road. This included surprising an individual who was outside with emergency response workers because of a medical issue.

When one woman in the crowd told him, “We need you,” he responded, “I’ll be here.” Soon after that though he got into a waiting car, and the crowd clapped and cheered when the motorcade drove off.

Peter Cooper resident Rami Hahial, who had gotten a picture of him outside, called the experience “a high moment in my life.” She had just texted some friends about who she’d met “and they didn’t believe me. So I sent them a picture, and they said, ‘I hate you.’”

She added, “I’m not American. I’m Canadian, but to me it was mesmerizing. I’ve never met someone so human. I feel like the Clintons are portrayed as being run by Wall Street and they’re not human, but there’s no way the way he shook my hand and was smiling.”

Stuy Town resident Linda Ayache agreed. “He was lovely. Look at the way he came here and he talked with each of these seniors. We’re happy to meet him.”

John “Butch” Purcell,” a longtime Stuy Town resident, praised Clinton for knowing how to work a room. “He was the supreme room worker,” said Purcell. “I asked him if he liked the Yankees, and he said ‘of course,’” said Purcell. The conversation then turned to basketball and Michael Jordan. “He said there’s was no one man who could win the championship and he’s right,” said Purcell. “It takes more than one person. It takes two or three on a team to win a championship.”

Another resident, Herman Diamond, who’d gotten to chat with Clinton as he, his wife and another couple had been playing bridge at the community center, called him a “great politician. He had a story for everything. I like him better than his wife. He worked with John Kasich to accomplish things, because he worked with Republicans.” Diamond then conceded that he liked Kasich, though he was uncertain who he’ll be voting for. He did however know who he didn’t want in the White House. “Anybody but Trump.” Diamond added that though Clinton had apologized for interrupting the bridge game, he’d had a lousy hand. “I was grateful he interrupted.”

Evelyn Diamond added that she thought the grip-and-grin style event was better than simply having Clinton speak from a podium. “This is a wonderful way to meet people,” she said. “He was unflappable. If you asked him something, he came up with some sort of answer.”

On the campaign stop, Stuy Town General Manager Rick Hayduk said other candidates might not want to bother asking him if they can make a similar visit. This event, he said, was only authorized because it was requested by a resident — Garodnick.

“You need a sponsoring resident,” said Hayduk. “If Trump called, ‘I’d say get a resident.’”