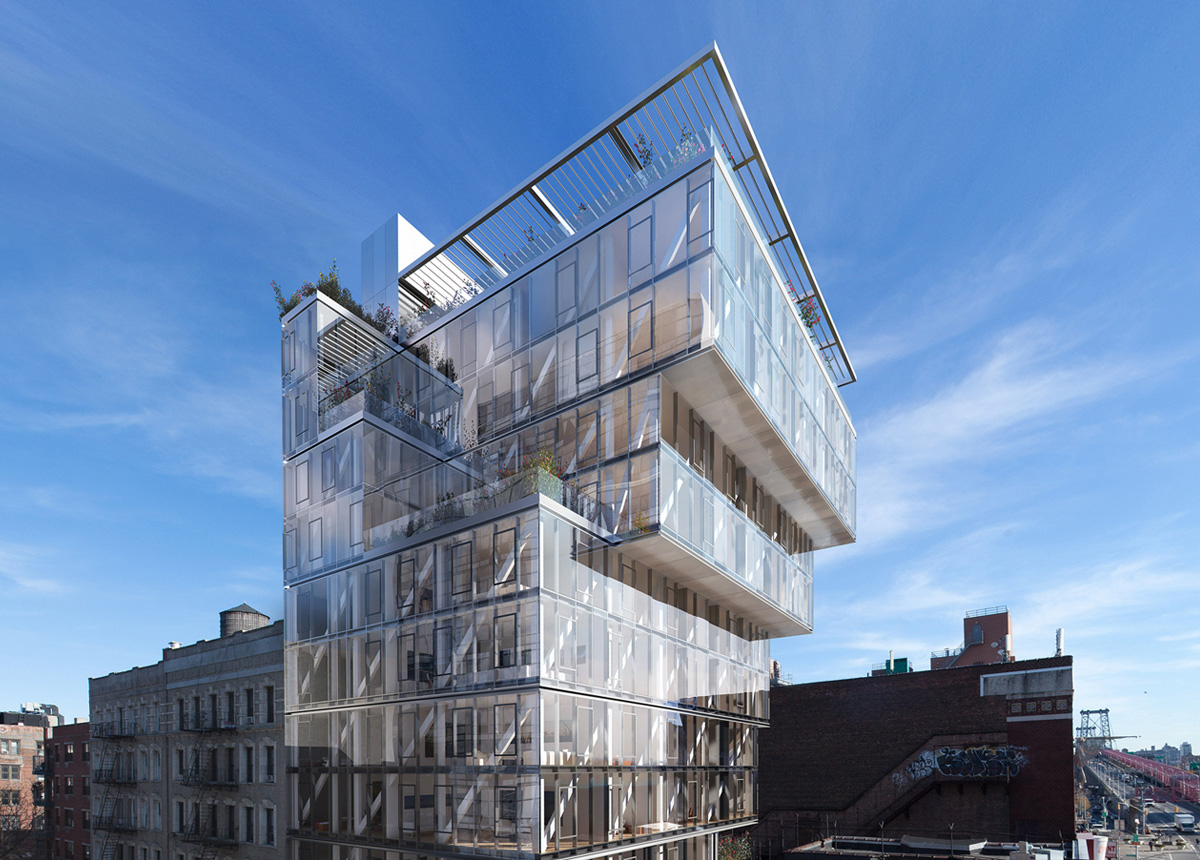 Sandwiched between a medium-rise prewar apartment building and a graffiti-strewn pawn shop, the unblemished glass and white steel of 100 Norfolk stick out on the Lower East Side.

In addition to contrasting with some of its neighboring structures, the 12-story condo building literally sticks out, with six of its top floors cantilevered over the roofs of adjacent properties.

Designed by ODA Architecture and developed by Adam America Real Estate, 100 Norfolk is a 38-unit luxury condo building with an ultramodern design.

Located near the intersection of Norfolk and Delancey Streets, the property is at the heart of one of Lower Manhattan’s trendiest neighborhoods, rife with bars, restaurants, museums and plenty of new construction.

Thanks to the building’s unique vantage points and expansive widows, residents can enjoy uncompromised views of the bustling streets below either from their glass-lined apartments or from one of two common roof decks.

“We wanted to create a luxury condo that will add architecture aesthetic to the neighborhood,” Omri Sachs, co-founder of Adam America, said. “I also wanted to build a project that will remain iconic for years to come, and when Eran Chen [of ODA] presented us with his interpretation of it, we just knew that was it.”

While a bold design was always the goal, the end result was also a matter of necessity because of the site’s narrow footprint. Sachs said other developers had looked at the property and passed on it because developing it entailed dealing with a complicated mix of easements and air rights.

Sachs credits ODA for a solution that was not only eye catching, but also profitable.

“Since we had an easement over the neighboring properties, [Chen] brought the larger volume of the building to the top floors, where the sales prices are higher,” he said. “That way, the cantilever is not only visually appealing, but also gives a large amount of units magnificent views.”

In addition to the floor-to-ceiling double-paned windows, apartments have oak floors throughout as well as Quartz countertops and backsplashes to go along with Gaggenau appliances in their open-design kitchens.

Passing under the slanted white columns at the foot of the building, residents and visitors enter the building through a lobby that could double as an art gallery or chic café, with its 27-foot ceiling, sculpted wood wall and cozy fireplace.

On-site amenities include a fitness center, bike room and finished rooftops, which include landscaping and barbeque areas.

Sales prices have ranged from less than $700,000 for a studio to more than $6.7 million for one of the penthouses. The building also qualifies for tax abatement through the city’s 421-a program.

The Lower East Side’s appeal to developers is not new. For proof, one need only look across the street at the mosaic-like façade of the Blue Building, a 16-story apartment building erected more than a decade ago. Still, the last few years have been particularly active, headlined by Essex Crossing, a nine-building, billion-dollar project that will include 1,000 apartments and an underground retail hub akin to the Chelsea Market.

However, Adam America had a jump on the competition, purchasing 100 Norfolk Street in 2012 for $8.8 million in an all-cash deal that saw it partner with The Naveh Shuster Group and The Horizon Group.

Sachs said the area caught his attention while his company was working on a pair of rental properties in Williamsburg, 65 North Sixth Street and 53 Broadway. Recognizing that the Lower East Side had what he described as “a very similar vibe” to the emerging neighborhood just across the East River, Sachs said he and his partners “could feel that something was brewing.”

“When we started working on it, Essex Crossing had not been in the planning yet,” he said. “Still, we recognized the neighborhood for a cool, rustic and genuine downtown hub, with great historic past, transportation, bar scene with proximity to all of downtown’s neighborhoods and Williamsburg.”

In a somewhat ironic reversal of roles, the Manhattan development is actually using its proximity to Brooklyn as a selling point.

Douglas Elliman’s Ariel Tirosh, who is leading the sales effort at 100 Norfolk, said there seems to be a strengthening bond between Williamsburg and the Lower East Side, one that will be put to the test when the L train line shuts down for extended repairs next year.

“We will have a great answer once the L train shuts down, to see just how strong the synergy is between the two,” he said.

In February, Tirosh closed a deal for 100 Norfolk’s Penthouse BC at $6.734 million, a record transaction price for the Lower East Side. He attributes the new high-water mark to the neighborhood’s rapid redevelopment.

“This record-breaking sale demonstrates a major shift in the Lower East Side market as one of the most sought-after locations within the city for buyers and developers alike,” he said. “With so much continual development on the horizon, the neighborhood is poised to continue on this track and I am excited to continue my support of this growth through my work.”